Home » Reviews » Review of Love, Bombs and Apples at the Arcola Theatre 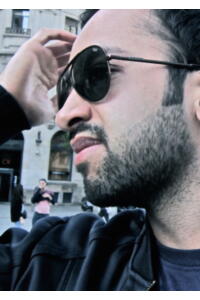 As part of the Shubbak Festival’s window on contemporary Arab Culture, Hassan Abdulrazzak has offered four vignettes that provide a witty and – at times – emotionally fraught insight into the deeply personal and extraordinary human stories that underlie the broader public issues facing the Arabic and Muslim communities across the world. Abdulrazzak gives us the plucky Palestinian actor committing his intimate act of unintentional public defiance (Love in the Time of Barriers) and the stifled Pakistani auteur bringing poetry to a terror plot (Level 42), to the Bradford youth as fascinated by the iPhone as IS (The Apple) and the Jewish New Yorker faced with a choice between family and love (Landing Strip). Love, Bombs & Apples juxtaposes the personal with the public, the particular with the ordinary, and in so doing reminds us of the divinely comic and absurd human realities that underpin the terrifying Islamic narratives we are fed daily in our newspapers and our news channels.

In many ways this production is, of course, deeply political: the play is book-ended by the Palestinian struggle; one character is unfairly detained under Section 41 of the Terror Act; another discusses with searingly satirical candour the allure of the Syrian battlefields. But perhaps the inspiration of Abdulrazzak’s writing is how apolitical he has rendered these discussions by focussing – with fiercely intelligent acuity – on the idiosyncratic quirks and foibles of each brilliantly observed character. The play is as parenthesised by sex as it is by the Middle East peace process, radicalisation is synonymised with consumerism, and sometimes 14 days detention just isn’t enough time to finish the latest draft of your book. As such each seeming act of rebellion becomes the unintentional consequence of a baser – even bestial – human desire. And when these lofty and global concerns are put in such stark apposition to the modest and local the only possible reaction is laughter, and this is perhaps Abdulrazzak’s greatest strength: in this little play he has himself defiantly toppled those ‘Islamic’ taboos by making them perfectly risible.

It wouldn’t do not to mention the wonderfully restrained touch that was taken in the design of the show, both visually and aurally: Mila Sanders’ bare set allowed for as little distraction as possible from the action of the play, while James Hesford’s sound design is as witty as it is pertinent (imagine a ringtone ringing into a poppy scene-break, and a well-chosen boxing-ring bell punctuating a verbal argument).

Nevertheless, perhaps what is most extraordinary in this exploration of the ordinary is the performance of the only actor Asif Khan, who jumps between scenes and characters with such ease and deftness. It was little wonder that in a Q&A after the performance the first question asked of him was if the audience could hear the actor’s real voice. In each story every character was so unambiguously defined and appeared so complete it was hard to imagine that Khan and director Rodamunde Hutt had spent anything less than a lifetime defining each mannerism, trait, and quirk. Indeed, the subtleties of Abdulrazzak’s play in the hands of a lesser actor would have been completely lost, as a script that deals in the nitty-gritties of the ordinary is necessarily reliant on a truly exceptional performance to lift quotidian mundanity into something so compellingly watchable.

The final scene ends with the Jewish New Yorker conceding that “it’s gonna be ugly,” and although Abdulrazzak claimed that this didn’t speak to any grand existential statement but rather to the particularities of that character’s situation, one can’t help but feel that these words speak to the reality of life – not just as an Arab or a Muslim – but rather as a human being. Certainly we can talk in lofty ideals and abstract political arguments, but when we truly examine the human stories that are both defined by and in turn define the broader political picture, Abdulrazzak shows us that nothing is ever simple, nothing is ever neat, and nothing is ever pretty.

A Palestinian actor learns there’s more to English girls than pure sex appeal. A Pakistani-born terror suspect figures out what’s wrong with his first novel. A British youth suspects all is not what it seems with his object of desire. A New Yorker asks his girlfriend for a sexual favour at the worst possible time.

Love, Bombs & Apples is the comic tale of four men, each from different parts of the globe, all experiencing a moment of revelation. It was one of 12 new plays specially selected for a rehearsed reading in Arcola’s PlayWROUGHT Festival in January 2015. Now it receives its first full staging as part of Shubbak – A Window on Contemporary Arab Culture.

This isn’t the first production to go down the road of referencing a one-star review of their show (from a different publication, I hasten to add). … END_OF_DOCUMENT_TOKEN_TO_BE_REPLACED

Two sisters reunite after the death of their mother, and secrets pour forth. Robert Holman’s new play gently exhibits talented classical acting in a … END_OF_DOCUMENT_TOKEN_TO_BE_REPLACED

Everyone’s vexed in this show, though some have clearer reasons to be than others. Mrs Driscoll (Tameka Mortimer) is struggling with a home life that … END_OF_DOCUMENT_TOKEN_TO_BE_REPLACED

The penultimate production of the 2021 Tête à Tête Opera Festival, based at London’s Cockpit Theatre and showcasing contemporary and avant-garde new … END_OF_DOCUMENT_TOKEN_TO_BE_REPLACED

Relatively Speaking premiered in 1967 and is the sort of show that is, by contemporary standards, very much of its time, and not just because of … END_OF_DOCUMENT_TOKEN_TO_BE_REPLACED