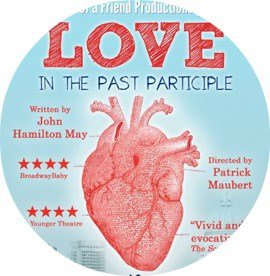 2015 is the inaugural year for the ‘Playmakers Festival’ at the Tabard Theatre where over the course of 6 days, six new plays were given their London premier, and I was lucky enough to catch one of the shows “Love in the Past Participle” presented by A Friend of a Friend Productions.

A long table, with all sorts of ordinary detritus dominated the room as the audience took their seats. After a while and with no particular rush, the actors (Ashley Beckett, Joshua Diffley, Philip Honeywell & Tamaryn Payne) come on, sat down and started doing ordinary things, never acknowledging each other. As the lights went down, they started to talk, each delivery interlinked monologues giving their own version of how they had arrived at the place they were at relationship-wise today. Individuals they may be, but it is soon made clear that the lives of the stories of these four are closely related and will eventually come together in a most explosive way.

Writer John Hamilton May has put together a wonderful piece of theatre. Each character has their own personality talks about the development of their relationships from first meeting their current paramour to point they are currently in with their lives. The language is natural and believable for example one of my favourite lines of the whole show was ‘I was watching Corrie and calling it Corrie, that isn’t me’ and brings an emotional depth and credibility to all the characters. Coupled with superb direction by Patrick Maubert, “Love in the Past Participle” is a play that the audience can identify directly with. I was hooked from the start and it almost felt as if each of the actors was talking to me personally, wanting to make me a part of their lives as they told me about their emotions and actions – both good and bad. But, I was allowed to make my own mind up about the motives behind their actions. At no point did I feel I was being manipulated to approve of something – for example Philip’s cock-up with his relationship is told in a matter of fact way that means it makes sense but is not begging for the listener to give their approval.

All in all, “Love in the Past Participle” is a lovely production that, if anything, was a little bit too short (running time around 45 minutes) for me as I really wanted to know not only more about everybody, but also, as I had become so attached to each of them, I wanted to continue with them as their journeys went on and they faced the fall-out from their time together.

If “Love in the Past Participle” reflects the standard of the rest of the productions in the ‘Playmakers Festival’ then I am already looking forward to the 2016 run.

Love in the Past Participle
Four separate lives become intertwined in this poignant, stripped-back look at love… in the past participle. Following its sell-out run at the Edinburgh Festival Fringe 2013, A Friend of a Friend Productions brings this beautiful, award-winning piece to the Tabard Theatre for its London debut.

Harold Shipman, known to his many patients, family and friends as ‘Fred’, was Britain’s worst serial killer. The official inquiry into his crimes … END_OF_DOCUMENT_TOKEN_TO_BE_REPLACED

Being one of Arthur Miller’s best-made and most challenging plays, The Crucible is also one of his most frequently performed. I was going to say … END_OF_DOCUMENT_TOKEN_TO_BE_REPLACED

To be fair, Linda Lavin called her concert Love Notes, there’s an album of the same name, and that’s more or less what it was about - variations on … END_OF_DOCUMENT_TOKEN_TO_BE_REPLACED

Noughts & Crosses is a euphemism for blacks and whites. The Noughts are the whites and the Crosses are the blacks. In the world of the play, the … END_OF_DOCUMENT_TOKEN_TO_BE_REPLACED

This ‘juke box’ musical offers highly polished, undemanding, feel-good entertainment, showcasing, as it does, 30 songs dating from the 1960s to the … END_OF_DOCUMENT_TOKEN_TO_BE_REPLACED