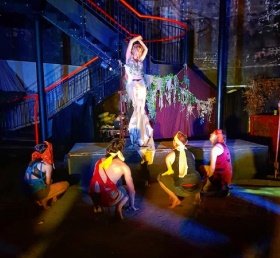 The beauty of theatre is that affords a visceral platform for collaboration to come alive in front of a patron’s eyes. And it is this very notion that perpetuates an intricate set of foundations for a work to either succeed or fail.

Sometimes, gold is stuck, and the fruits are bountiful and blessed. At other times, you can be presented with nothing more than a mere turkey. In instances such as those afforded by enterprises like Mowgli, it is more of a complex affair, and something more akin to a Curate’s Egg emerges; where the good – and even the excellent – congeals with (and within) the bad.

Treading the familiar landscape of Rudyard Kipling’s The Jungle Book, Abiku Theatre’s interpretation expands upon young jungle boy Mowgli’s exploits and tribulations, whilst also finding time to touch upon the famous themes of nurture and nature. With a small, but bracingly ebullient and enthusiastic cast adopting a number of different roles per actor, this is a tantalising glimpse into the calibre of performers on the fringe theatre scene.

Some notable standouts include Joe Newton (primarily as Bagheera), Maximilian L’olive (primarily as Akela) and Jessica Jane, who all adopt chameleonic shifts of tone, timbre and physicality that seem to come with a natural ease. Credit also has to go to Joanna Harker, who had to stand in as Shere Khan at late notice after an unfortunate illness meant that the original actor could not continue the run. Although Harker is not a natural fit at first glance, her refreshing interpretation makes a notable impression.

Whilst props go to the performances, less can be offered towards the writing and the direction. There are chunks of action and dialogue in this overlong piece that could have been excised to the betterment of the material as a whole. Sometimes, less truly is more, and this appears to have been lost somewhat here. Further, this is unhelpfully assisted by direction more confused than Boris Johnson’s relationship with the concept of political correctness.

For example, some of the elongated gambolling could do with a dose of welcome restraint and trimming down in terms of duration. At various points, it feels more like a bird of paradise flying over a cuckoo’s nest and in some need of a jungle book-centric, didactic Nurse Ratched to instil a modicum of order (but obviously not too much. That would be plain dull).

All in all, there’s a chintzy allure to this ramshackle Mowgli, in what is a rambunctious, chaotic and baggy play that nevertheless sets out to warm the cockles of your heart. Only those with a pronounced case of rigor mortis could depart from this production without the warm fuzzy glow of having seen something unique, imperfect, more than a little bonkers and yet also a lot of fun.

Set in the ancient and mysterious Brunel Tunnels, Mowgli lulls you into a world of wonder. A young forgotten boy comes of age without identity, and seeks his rightful place whilst unknowingly setting a series of events into action that will change him, and the law of the jungle forever.

A tale of belonging, unexpected kinships, and rivalries passed from age to age. The characters excite, thrill and alarm, with folk-song, movement and live music. Mowgli is a piece that all ages can delight in. Adapted from Rudyard Kipling’s The Jungle Book by Joe Newton, directed by Abiku’s founder/creative director in partnership with Joe Newton. Abiku Theatre Company takes you into a whirlwind of a jungle as you’ve never seen it before.

EverAfter, A mixed up fairy tale at the Chickenshed Theatre, is a great Christmas show. As the title suggests, this is a concoction of stories. The … END_OF_DOCUMENT_TOKEN_TO_BE_REPLACED

The thing about Panto is not to over-think it. It’s about having fun and surrendering to the Christmas spirit. Like Christmas crackers, there is a … END_OF_DOCUMENT_TOKEN_TO_BE_REPLACED

Anyone who's worked in investment banking knows it's largely an intellectually-free zone, polluted with people who calculate each other's value … END_OF_DOCUMENT_TOKEN_TO_BE_REPLACED

By the production’s own admission, the version of events as detailed in Bonny & Read is unlikely to equate to an exactly full and fair account of … END_OF_DOCUMENT_TOKEN_TO_BE_REPLACED