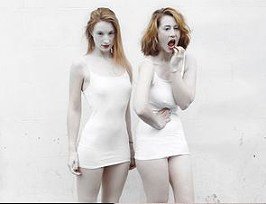 Just in case the title of this new piece from Melbourne leads you to expect a dramatisation of the much-crooned Thirties jazz number, it’s no such thing. Given that it’s a collaboration between two radical and largely experimental companies, MKA and Les Foules, this should not be surprising.

What unexpectedness there is – and there’s plenty – lies in the plain dysfunction of the dialogue in the five disparate but linked playlets that fill the programme’s intense and unsparing hour. Within this dysfunction there is some sense of tradition running through, with an abundance of echoes from vaudeville and music-hall, Beckett and French existentialism.

Then there is the venue itself, which could hardly have been better designed to present such a mixture of flashing lights and cryptic darkness. For this show is part of the enormous Vault Festival currently running in the labyrinth of hidden spaces beneath the lines out of Waterloo and accessed via a splattered riot of legal graffiti. No matter what’s happening on stage, there’s a random sound cue passing like doom overhead as the train wheels cross the track joints at funereal pace. You don’t know when it’s coming again, only that it will. It compromises the silence on its own terms, sometimes inappropriately, sometimes with impeccable timing. The District and Circle Line noises coming through the walls of the old Royal Court were never more dramatic.

In the four years of its life MKA has acquired a sort of respectful notoriety and this set of mini-plays shows why. The author Tobias Manderson-Galvin, who is also the company’s co-founder and joint creative director, writes with an undisguisable love for the very stories and myths which he seems to be undercutting and even desecrating.

This relationship with his material makes for dialogue with a kind of punk grandeur – scattering, bamboozling, then stark, plain and pained. In They Shoot Horses, Don’t They, a young woman seems to have fulfilled her youthful ambition, which was to grow up equine, to become a My Little Pony of a person.

In Jack The Ripper Experience, the celebrity of the infamous Victorian – roughly contemporary with the station’s brickwork – is anatomised, there’s no other word for it. In the process, the whole business of myth-making and legacy is similarly placed on the slab and dissected.

If there is a shared preoccupation of the five pieces, it seems to be the failure of promise, the permanence of hope, and the trying matter of being slung between the two on a dodgy hammock. One of his characters, discussing the possibility of making bespoke babies, speaks of a “drive-through transaction.” The phrase is surely at the heart of what Manderson-Galvin is getting at, whether knowingly or not; the way that bright possibilities become lanced by dull practicality.

As a writer he’s too purposefully tangential to declare such, well, dull, agendas. If his own intention is to avoid dullness, even at the cost of obscurity, he succeeds. As does his clear-eyed director Nathalie Adlam, and her four-strong cast – Ayesha Tansey, Nadege Adlam, Sarah Fraser and Norma Butikofer – alternately funny, unfunny, past control and deeply affecting.

I went back to the old lyric in a shameless search for clues. Along the way I saw that the song is sung by Norma Shearer in the 1939 movie The Women. She sings it just as she is leaving her tea-time women companions in order to take a phone call from her misbehaving husband. “And listen, if you can’t say anything real nice, it’s better not to talk is my advice.” Maybe, but not nearly so entertaining.

Please Don’t Talk About Me
This is new writing by the artistic director of Australia’s largest and most renowned fringe company MKA Theatre, in association with UK’s Les Foules
Running until February 15th; evenings, 6.30 pm; Saturday and Sunday matinees, 2.00 pm.

I have seen some outstanding acting recently at the intimate Finborough Theatre, and this new play is no exception. The highly talented cast quickly … END_OF_DOCUMENT_TOKEN_TO_BE_REPLACED

In the pandemic (remember that?) I worked in adult social care. My role was to help older people in their own homes with daily tasks - I’d cook meals, … END_OF_DOCUMENT_TOKEN_TO_BE_REPLACED

The world-famous Wilton’s Music Hall and the children’s classic The Wind in the Willows make perfect bedfellows. Piers Torday has written a version … END_OF_DOCUMENT_TOKEN_TO_BE_REPLACED

Some journalists get, as it were, a bad press, though some of them don’t help themselves with some of the things they write and do. This play doesn’t, … END_OF_DOCUMENT_TOKEN_TO_BE_REPLACED

Paul (Lewis Bruniges) and Freddie Metz (Oliver Yellop), who identify as cousins, are so desperate to get out of the German Democratic Republic, … END_OF_DOCUMENT_TOKEN_TO_BE_REPLACED