Home » Reviews » Review of Rats at the Etcetera Theatre, London 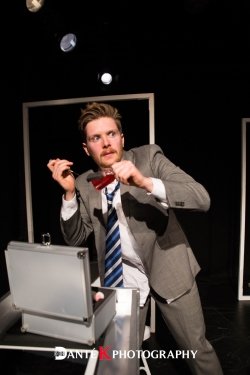 Imagine, if you will, a world where it has become possible, and then desirable, and then somehow established practice, for people’s ego to be suppressed at birth. Rats goes to some lengths to explain this concept – it needs to in order for it to be coherent, and even then, there are still questions about this kind of world and how it came about. Not everyone has had their ego suppressed – those who have are referred to as ‘rats’, and those who have not are ‘cons’. It’s one thing to have something like Google’s Assistant or Amazon’s Alexa for public transport updates or what the weather forecast is for tomorrow evening. Here, the ‘rats’ ask ‘Darren’, a super-computer, for almost anything and everything, from whether they should accompany someone to the other person’s destination to how they themselves are feeling at a given moment.

The implications are frightening, perhaps all the more so because they are only really implied in the show – less than one percent of the population are ‘ego-conscious’, and most of them are in government or civil service jobs, with access to vast amounts of data about the rest. The rationality that the ‘rats’ have, no longer thinking for themselves, is relentless, and sometimes humorous: only the ‘cons’ spend money to drink excess amounts of alcohol and suffer a hangover the following morning, and when Lynn (Hayley Osborne) asks why the décor in her workplace is so plain, her line manager Robert (Mike Parker), a ‘rat’, stoically replies that if she really must look at something aesthetically pleasing, she can look at the office plant.

Some of the scenes are rather short, which suits a narrative in which people generally follow what a computer has determined is the best way forward. The longest scenes, therefore, are ones where ‘cons’ are having to make up their mind up about something and must deliberate without the benefit of algorithms and the use of previous data to determine what should happen next. (Tell that to investment funds, whose prospectuses rightly insist, ‘Past performance is no guarantee of future results.’) What was interesting – to me, at least – was the unquestioning devotion to Darren, encouraged by the ‘cons’. George (David Clayton) attempts to encourage Robert to stop asking questions about an incident involving Lynn (who, without giving too much away, applied to become a ‘con’ so she could think freely) and redouble his trust in Darren.

Then there’s Katy (Charlotte Bloomsbury), a medic who performed the procedure to give Lynn a new life. Her journey, for want of a better word, is fascinating – faced with George’s morally dubious conduct, her ego starts shining through, despite not being one of the privileged few. The show seems to suggest that there is a responsibility on those in positions of power and influence to exercise their authority in a conscientious way. But it does so without a scintilla of preachiness or stating the obvious. In short, to quote Lord Acton, “absolute power corrupts absolutely”.

Still, there remains hope in the egoless dream to the end, and after the show, one or two in the audience at the performance I attended said they would prefer to be a ‘rat’ – to enjoy a certain standard of living without the stresses and strains of having to think for oneself. One person even pretended to ask ‘Darren’, adopting the mannerisms of the characters in the show, where they should go for a post-show meal. For the record, I would prefer to retain autonomy. This thoughtful and insightful play is a harrowing exploration of a possible future world in which artificial intelligence can have far-reaching consequences.

In a dystopian future where everyone’s ego are chemically suppressed at birth, one man has saved up enough money and pays for the procedure to restore his ego. He immediately regrets this decision and desperately seeks to get rid of it again. He soon finds out it’s not quite that easy as the consequences of his decision begin unravel and threaten the very foundations of this society.

This dark comedy explores themes of what it means to be an individual in a world governed by technology and whether individuality is even a desirable quality.

This play was first put on at The Mill at Sonning in early 2010 - the world has, of course, changed significantly since then, and the script has been … END_OF_DOCUMENT_TOKEN_TO_BE_REPLACED

It’s easy to see why the Orange Tree has brought this one back for another run, less than a year after its first outing here. This is a bold, … END_OF_DOCUMENT_TOKEN_TO_BE_REPLACED

I always loved Choose Your Own Adventure books. Definitely not the Steve Jackson ones where you had to roll dice (who did that?) to find out whether … END_OF_DOCUMENT_TOKEN_TO_BE_REPLACED

Well, there’s a bit about Pablo Picasso’s (1881-1973) paintings in this show that bears his name. But it’s mostly about his approach towards women. … END_OF_DOCUMENT_TOKEN_TO_BE_REPLACED