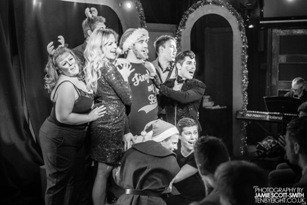 Santaphrenia can best be described as a naughty Christmas musical. Santa Claus wants to retire and the North Pole computer system (named C.L.I.T.) has found the perfect candidate to take over the job. Unfortunately, they pick up his twin brother Malcolm instead, who has spent his life living in the shadow of his book smart, perfect brother. Santa’s wife is frustrated from lack of attention, Crystal the elf has a dirty secret, and NutKracker is a bad influence from Krackertown who schemes with Mrs Claus to use Malcolm’s access to C.L.I.T. and teach Santa a lesson.

Santaphrenia is a show about Christmas that isn’t as cringe-worthy as panto. And I got what I wanted! It is a naughty show from start to finish. A boy in his pants pulled down to expose his bottom as he masturbates in the top bunk, Santa smoking crack cocaine, the NutKracker being heavily into S&M, and suggested reindeer sex, this show has it all, including a reference to candy crush, and with songs.

From Malcolm’s lament about being born ‘Seven Minutes’ after his perfect brother, via ‘Let’s Play’, sung while characters are going at it in a crack den, to the hilariously ridiculous ‘Santa’s Not a Paedo’, the songs are varied, and generally quite short. 16 musical numbers in one 75 minute show is impressive, and the quality of the material is high. The biggest surprise number was Rudy (the reindeer)’s song ‘Don’t f*ck with my Santa Claus’, sung by Nick Martland. As Martland was an elf background character for most of the show, I did not expect him to come on and blow us completely away with his fantastic voice. This is a man I want to hear sing again!

The plot is a bit silly and not really resolved for Santa by the end of the show, but as everyone has hooked up with their love interest by then, no one really cares about what happened to the Santa paedo allegations, although I can reveal to you that the show thankfully does not actually suggest that Santa Claus is a paedophile.

The show has fun costumes and props, a great cast with brilliant comedic timing and sweet little dance numbers. If you’ve ever wanted to see an elf with a ball gag being spanked, this is the show for you. Even with all the naughty bits, the show has a strong message about acceptance of people being different, and as they say so nicely at the end, the best gift you can give someone is your time, and I would be happy to give this show more of mine.

Santaphrenia was sold out for the last week of the run, and the show promises to come back bigger and naughtier next year. Although how it can get naughtier than this without going too far into the crude side to be amusing is anyone’s guess. But I know I’ll be there, and I’m bringing friends.

It is 2002 – another Royal Jubilee year, and HRH (Mary Roscoe) is due to open a new Science wing in a 'sink' comprehensive where Dr Derek Jones … END_OF_DOCUMENT_TOKEN_TO_BE_REPLACED

Dr Anna LaRosa (Dr Stefania Licari) has a lot to say. Just as well, as she’s the only one on stage in this medical comedy, which largely draws its … END_OF_DOCUMENT_TOKEN_TO_BE_REPLACED

Nikhil Parmar’s one-man show, originally written as a TV pilot, manages to touch on a wide range of themes from Islamophobia to modern fatherhood with … END_OF_DOCUMENT_TOKEN_TO_BE_REPLACED

Handel’s 1738 opera Serse (or Xerxes) is an exploration of power, love and human frailty. King Serse falls in love with the voice of his brother … END_OF_DOCUMENT_TOKEN_TO_BE_REPLACED

Lea Salonga has her fans. She also has some superfans, the ones who yell, “I love you Lea!” at almost every opportunity. If that wasn’t enough, there … END_OF_DOCUMENT_TOKEN_TO_BE_REPLACED