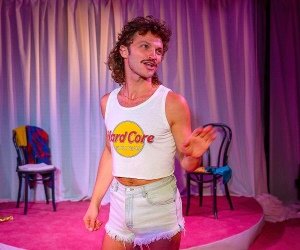 Occasionally in the theatre, a show is just a show. The audience, and especially the reviewer, can sit back, relax and enjoy the production solely for its own sake without having to think too deeply about plot-lines, sub-text, or any of those other things. In fact, sometimes you just have to give yourself over to absolute pleasure. And this was definitely the case last night at the King’s Head Theatre where I experienced the awesome Schlong Song.

Woody Shticks burst onto the stage in a blaze of light, sound and really skimpy ‘Daisy Dukes’ and delivers an amazing talk on gay life in general and his in particular. From his first stirrings of knowing he was different from the other boys at his ultra-conservative Christian school, through to an amazing and very emotional encounter with a closeted man in Eastern Europe – an area not renowned for its tolerance of man on man action.

Woody does not hold back, both physically and descriptively in connecting with the audience and while there is so much humour in his story-telling, there is an element of tragedy as well. For example the ‘bro’ story which was one that really resonated with me, has so many amusing elements that any gay man who has ever had some sort of relations with an heterosexual who ‘has never done this before honest’ will recognise, but ultimately it has a poignancy as the ‘bro’ once satisfied just ups and goes back to his ‘normal’ life and probably his cheerleader girlfriend.

Surprisingly for a show that is described as “Stand-up storytelling, hip-hop heroics, and emotional nudity collide in this smash-hit smackdown of sexual misadventure” Schlong Song also makes you stop and think. For example, Woody talks about the rise of hetero-normativity amongst gay people and the way that is seen as a means to gaining acceptance, something gay rights activist Peter Tatchell often talks about but in a far less engaging way.

Ultimately, Schlong Song is simply an amazing piece of entertainment. Woody throws himself totally into the show and makes a wonderful and lasting connection with the audience. There is something so open and honest about Schlong Song and Woody’s performance that, despite the nudity, displays of certain techniques (and no I didn’t take notes) and forthright language, I could imagine taking my mother and Auntie Ann to see the show without worrying they might get offended. At the end, Woody invites the audience to have a chat in the bar and, for once, you get the feeling that this performer really means it. Brilliant.

Stand-up storytelling, hip-hop heroics, and emotional nudity collide in Woody Shticks’ smash-hit smackdown of sexual misadventure. Shticks’ days inside a Puritan cult give way to nights inside consenting adults on a quest to answer the timeless query: “What is gay shit, and where do I find it?” Hop on the scenic route to the bone zone – through good sex, bad luck, and the warmest corners of your own sticky mind – in this honest onslaught of hanky-panky hijinks! Hailed as “razor-sharp” by Seattle Star, “comedy gold” by BroadwayWorld, and “too gay to book anything but children’s theatre” by his college acting teacher, Woody Shticks has taught children’s theatre in 48 United States, headlined the Seattle Fringe and the International Dublin Gay Theatre Festival, and pole danced his way into hearts and pants around the globe.

If the audience were to be exposed to full versions of the seventy-four songs listed in the programme, it would be a very long show indeed. I suppose … END_OF_DOCUMENT_TOKEN_TO_BE_REPLACED

How can a play be both charming and devastating? Through its tight script, abundant humour and pitch-perfect performances, 4th Country manages to … END_OF_DOCUMENT_TOKEN_TO_BE_REPLACED

Britain, so a London cab driver once told me, is obsessed with the Second World War, as though it happened just recently. Power Luncheon would seem, … END_OF_DOCUMENT_TOKEN_TO_BE_REPLACED