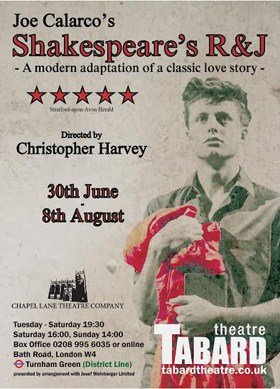 I’ve seen a few versions of Romeo and Juliet over the years. As one of Shakespeare’s most popular plays, it must have been performed countless times around the world, with each production trying to put its own unique twist on this well-worn tale of star-crossed lovers. But even so, I’ve never seen an adaptation quite like Shakespeare’s R&J.

The play was written by Joe Calarco almost twenty years ago, and has since been performed all over the world, including the USA and London’s West End. This new production by Chapel Lane Theatre Company, directed by Christopher Harvey, began life as an amateur production at Stratford upon Avon in 2014, and is now resident until 8th August at the intimate Tabard Theatre.

Four students at a strict boys’ boarding school find an old copy of Romeo and Juliet, and read extracts to each other after class, with each taking on one or more of the characters. But what starts as a play within a play soon becomes much more complicated, and it’s difficult to determine where Romeo and Juliet ends, and real life begins. As two of the boys grow closer, all four must confront their own emotions. There are moments of joy, of violence and of unbelievable tension. But as the morning approaches, and their strict daily routine beckons, will the boys remember what they’ve been through together, or will it be a mere dream to be brushed aside as nothing?

Two of the actors – James Burman and Richard Hall – are reprising their roles from the play’s previous run at Stratford, while Alexander Morris and Jeremy Franklin are new additions to the cast. I had to look up in the programme which was which, though, because I genuinely couldn’t tell. All four young actors seem comfortable with their roles, and the gamut of emotions that each demands. Richard Hall and Jeremy Franklin have perhaps the more demanding task, as their characters struggle to understand and deal with the romantic relationship developing between their two friends.

R&J is a play about life and love, growing up and figuring out who you are. But it’s also a testament to the enduring relevance of Shakespeare’s work. A group of teenage boys, particularly one so indoctrinated in traditional gender roles, seems the least likely to identify with one of the world’s greatest love stories. And yet their sniggering and masculine posturing very quickly gives way as the power of the text takes hold – a reminder of why we still pay to see Shakespeare’s plays 500 years later.

As their two worlds begin to merge, the boys rearrange their school furniture to create the set for their drama, making particularly effective use of a length of red fabric during the violent scenes. A knock on the door following Tybalt’s murder could be the law looking for Romeo, or a teacher coming to discipline the students; the two stories are so intertwined by this point that it’s impossible to unravel them.

The play has a new ending, added by Joe Calarco to make its conclusion a little less bleak… but this is still Romeo and Juliet, after all, so don’t expect to walk out laughing. Of all the adaptations I’ve seen, this is certainly the most unique, and possibly the most moving – maybe because it touches on issues that still exist in our modern society, and consequently feels like more than ‘just a story’. There’s certainly a lot of food for thought to take away from this enjoyable production, and I’d recommend it to anyone who enjoys their Shakespeare with a bit of a twist.

“Many people think that “Shakespeare’s R&J” is just another version of Romeo and Juliet. It isn’t! The play is about four schoolboys in a strict boarding school who just happen to find an old copy of Romeo and Juliet and read extracts from it. Through the “reading” of Shakespeare’s words, the boys embark on a voyage of self-discovery and throughout the evening we see the boys likes and dislikes, their friendships and relationships, their hates and jealousies. In a way we are watching boys becoming men and, by the end of the evening, life for one of the boys will never be the same again.”

It is 2002 – another Royal Jubilee year, and HRH (Mary Roscoe) is due to open a new Science wing in a 'sink' comprehensive where Dr Derek Jones … END_OF_DOCUMENT_TOKEN_TO_BE_REPLACED

Dr Anna LaRosa (Dr Stefania Licari) has a lot to say. Just as well, as she’s the only one on stage in this medical comedy, which largely draws its … END_OF_DOCUMENT_TOKEN_TO_BE_REPLACED

Nikhil Parmar’s one-man show, originally written as a TV pilot, manages to touch on a wide range of themes from Islamophobia to modern fatherhood with … END_OF_DOCUMENT_TOKEN_TO_BE_REPLACED

Handel’s 1738 opera Serse (or Xerxes) is an exploration of power, love and human frailty. King Serse falls in love with the voice of his brother … END_OF_DOCUMENT_TOKEN_TO_BE_REPLACED

Lea Salonga has her fans. She also has some superfans, the ones who yell, “I love you Lea!” at almost every opportunity. If that wasn’t enough, there … END_OF_DOCUMENT_TOKEN_TO_BE_REPLACED