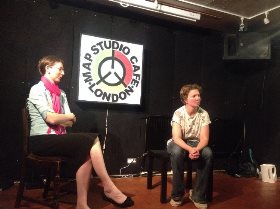 Sometimes a play starts and the smug audience member sit there thinking,’yep, I know where this is going’ and of course, sometimes that smug audience member is completely wrong. Last night at the MAP Studio Cafe, I was Mr Smug with egg over his face as I completely underestimated the power of the story in Chris Lee’s “Shallow Slumber”.

One morning, Moira (Zoe Cunningham) has an unexpected visitor in the shape of Dawn (Julie-Ann Nye) at her front door. Moira’s reaction to seeing Dawn is frosty to say the least but eventually lets her in and the two of them talk. It’s obvious they once had a close relationship and that, for some reason, things had gone sour between them. Act II moved the action to a prison visiting room where it is established that Dawn is a prisoner and Moira was/is her Social Worker. At this point we don’t know why Dawn is in prison but we do know it’s something that is extremely nasty – or is it? It’s difficult to be certain as Dawn obviously has a very low opinion of herself and is metaphorically beating herself up over her own perceived lack of redeeming characteristics. The final act takes place in Dawn’s home and draws everything together. I can’t say anything at all about this scene only that it is both shocking and amazing.

“Shallow Slumber” is an amazing play on so many levels. Chris Lee really knows his subject and has written a compelling story that, certainly for me, really kept me hooked all the way from the start through to an ending that I could not have guessed in a million years, which I’m sort of pleased about. Julie-Ann and Zoe were superb in their respective roles. Julie-Ann’s portrayal of the young, emotionally unstable Dawn was truly amazing as she delivered some long speeches that drew gasps from the audience as the story unfolded. Zoe Cunningham’s calm controlled, middle class, well educated social worker Moria was a marvelous foil for Dawn. Even while sitting still, not speaking, she managed to convey so much of Moira’s thoughts and feelings through some fabulous use of body language and facial expression.

Like many people, I have had little interaction with social workers, and probably have gained most of my knowledge of them from the news – and let’s be honest, social workers never make the headlines unless it is in a negative way – so I have often wondered what draws someone into the profession and I have to say by the end of “Shallow Slumber” I was none the wiser, although I was 100% convinced this would never be the vocation for me. But whilst the play was upsetting in places, and downright horrific in others, I ended up with a grudging respect for those that are prepared to put themselves through the kind of things Moira did to help people like Dawn – even when that help is thrown back in their face.

All in all, “Shallow Slumber” was a deeply upsetting story, by a writer who really knows how to connect with his audience, and told in an amazingly realistic way by two highly talented and committed actresses. I’m not going to say I enjoyed the show – it’s not that sort of production – but I was really moved by what I had experienced in this taut and heart-wrenching show.

Shallow Slumber
Written by Chris Lee.
For social workers everywhere and anyone with a heart. Dawn never thought motherhood would feel like this. Moira never thought she’d have a case like this.

Unfolding backwards to the heart-rending moment when everything changed, Shallow Slumber looks past the headlines to the lives beneath.
http://www.mapstudiocafe.com/

Handel’s 1738 opera Serse (or Xerxes) is an exploration of power, love and human frailty. King Serse falls in love with the voice of his brother … END_OF_DOCUMENT_TOKEN_TO_BE_REPLACED

Lea Salonga has her fans. She also has some superfans, the ones who yell, “I love you Lea!” at almost every opportunity. If that wasn’t enough, there … END_OF_DOCUMENT_TOKEN_TO_BE_REPLACED

I have no hesitation in saying that the 1952 movie “Singin’ in the Rain” and its 1985 stage version is one of the greatest musicals of all time, … END_OF_DOCUMENT_TOKEN_TO_BE_REPLACED

There are, Maria Caruso was keen to emphasise in a post-show discussion, no wrong answers when it comes to responding to Metamorphosis or even … END_OF_DOCUMENT_TOKEN_TO_BE_REPLACED

Children of the Windrush generation, sisters Dawn and Marcia, grew up in the 1980s. In Roy Williams’ new play Dawn is shown struggling to care for … END_OF_DOCUMENT_TOKEN_TO_BE_REPLACED