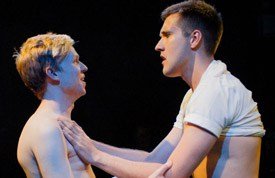 Perceived wisdom says that living with a disease should be no laughing matter, particularly if the disease you are living with is HIV. Fortunately for the theatre going public, writer Shaun Kitchener proves this completely wrong in his awesome play “Positive” currently at the Park Theatre.

In a flat somewhere in London, a young man is returning home from a night out. The young man’s name is Benji (Timothy George) and he is actually returning home at 8am and the last thing he wants is for his flatmate Nikki (Nathalie Barclay) or her boyfriend Greg (Paul Heelis) to catch him doing what they will instantly assume is ‘the walk of shame’. Of course, Nikki does walk in on him and instantly goes off on one about him being out all night. She was worried, but at the same time sort of proud of Benji, as this was the first time he had been on a night out since being diagnosed HIV Positive 18 months previously. As it happens and despite what Nikki and Greg think, Benji’s wasn’t exactly a stereotypical gay man on the scene evening. Admittedly, he had gone out on a Sunday night in a brand new shirt straight out of the packet and true, Benji had met a young, slightly over-enthusiastic, student called Olly (Ryan J Brown) and they had gone back to Olliy’s house where things did sort of develop. But ultimately, Benji is pretty happy to be home and wants nothing more than to have a shower before heading off to his medical appointment with Dr Jennifer Walsh (Claire Greenway). Nikki, has other plans and in the space of two minutes drops two enormous bombshells on Benji. Number 1, his mother, Margot (Sally George) called a couple of times and really wants to see her son, and number 2 Nikki and Greg have set him up on a blind date with Matt (Shaun Kitchener) a friend a of Greggs. A horrified Benji immediately says a decisive no to both of these.

Whilst being a busy girl, interfering (or as she would put it, taking an active interest) in Benji’s life, Nikki has her own problems to deal with. Like Benji, Nikki is HIV positive and is hoping to go and work with Greg in Africa – the place where they met – in the near future. Unfortunately, Nikki is also an over-analysing sort who always assumes the worst and reacts quite violently to any change in her circumstances, despite the reassurances of Jennifer. Both together and separately, Nikki and Benji are in for an interesting time over the next couple of weeks as they remember the past, live in the present and look to their respective futures.

I first saw “Positive” at the Waterloo East theatre in 2014 and absolutely loved it. Shaun Kitchener has a knack of writing ‘real’ characters saying completely believable things. He is also a master at manipulating the audience’s emotions and the word roller-coaster can be easily applied to this work. This is particularly true in the scene with Benji and Olly, where the very immature Olly’s interactions with the sensible Benji are both laugh out loud hilarious and jaw droppingly shocking in equal measure. In fact this scene contains my favourite line from any play I have ever seen. I’m not going to articulate it fully (especially as it needs to be heard in context) but it does involve a ‘hummus of death’. To be honest, there are so many great scenes in the play it is difficult to pick out those I loved most. The awkward first date, the mother/son confrontation, the Jennifer/Nikki man gossip, every single scene is dripping with humour, emotion, warmth and honesty.

As well as superb writing, the cast of ‘Positive” really bring the story to life. Every one of them is a star and I couldn’t imagine this show being performed by anyone else, each actor inhabits their character so well. I particularly liked Sally George’s Margo – a wonderful middle class woman who has, in her own words ‘spent most of her life in a small village where someone from a foreign country gets everyone gossiping. And you expect me to be up to speed with things like this?’ I think a lot of people need to remember this when dealing with the older generation – in fact I always think back to this line when my parents throw political correctness out of the window with their observations or comments, Director Harry Burton stages this production in the round and combined with wonderful writing and superb acting, it works on every level. The audience and cast are so close together that you really do feel part of the action as you live with Benji, Nikki and the rest for a couple of hours.

Overall, “Positive” is an amazing play in every respect. While never trivialising the struggles of living with HIV, the show demonstrates that it is possible to not let the illness dominate the sufferer’s life. A play that instantly grabs the audience and keeps their attention right to the last moment, “Positive” is a must see for any fan of theatre.

The pairing of work by Bob Dylan and Leonard Cohen in a single recital is a logical move. Though the latter died five years ago, his and his old … END_OF_DOCUMENT_TOKEN_TO_BE_REPLACED

If the dialogue wasn’t quite so eclectic and engaging, I might have decided to attempt to have kept a tally of how many times a trestle table is … END_OF_DOCUMENT_TOKEN_TO_BE_REPLACED

Doctor Who: Time Fracture by Immersive Everywhere has plenty to exhilarate both avid and casual Doctor Who fans, delivering on its promise to let … END_OF_DOCUMENT_TOKEN_TO_BE_REPLACED

A brief review of a brief play. It is, as the Prime Minister (Lisa Day) observes, extremely unlikely that her ‘letter of last resort’ would ever … END_OF_DOCUMENT_TOKEN_TO_BE_REPLACED

It’s a production of Hamlet that starts at 7:30pm and manages to come down on the ‘right’ side of 10:30pm - the hardcore fans and followers of … END_OF_DOCUMENT_TOKEN_TO_BE_REPLACED