Home » Reviews » Review of SimG Record’s A SPOONFUL OF SHERMAN 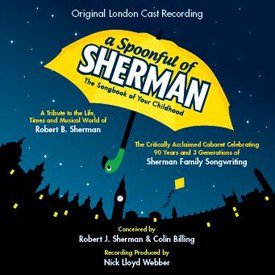 Sit back, relax and slip away into the Songbook of your Childhood with “A Spoonful of Sherman”. You may not know the name Sherman but I guarantee you will know the music of these two brothers as we go on a wonderful journey through their extensive songbook.

The album is taken from the critically acclaimed show of the same name and uses the same cast (Greg Castiglioni, Stuart Matthew Price, Charlotte Wakefield and Emma Williams) to deliver a lovely cabaret feel to the songs. However, this is not all music and the album has narration by Robert J Sherman – son of Robert B – which takes the listener on a journey from Al, songwriting for Tin-pan Alley in the 20s, 30s and 40s to the pairing of the Sherman brothers (Robert B and Richard M) as a songwriting duo. From their first steps into the world of composing in 1951 through their film music – particularly with Disney where they wrote more film musical scores than any other songwriters in the history of movies – and beyond to their freelance work, ‘Chitty Chitty Bang Bang’ and of course the Oscar winning ‘Mary Poppins’. Robert J takes us every step of the way introducing some of the family’s extensive back-catalogue and beyond to his own time as a celebrated songwriter giving a wonderful family tree-full of music that will keep you entertained from start to finish as you take in the expanse of the Sherman family legacy. Robert is obviously proud of his family and that comes across so well as he explains some of the stories behind the well known lyrics.

The narration is excellent but, of course, it is the music which dominates “A Spoonful of Sherman” and basically we are talking hit after hit after hit. Unless you have spent your entire life in a secluded monastery deep in the Amazon Rainforest, you will know – and be able to sing along to – many of the songs on this two disc album. I honestly don’t know where to start with listing the tracks, so I am just going to go with some of my favourites. ‘The Ugly Bug Ball’, A Spoonful of Sugar’,’ Feed the Birds’, ‘Step in Time’, ‘I wanna be like You’, The Age of Not Believing’, I could go on and on as there are over 40 tracks all together.

Musical Director and pianist Colin Billing has kept the music simple, just the talented cast along with his ivories leave the songs wide open to be listened to and appreciated for their lyrics and musical tone. Personally, I would have liked a full orchestra but this approach really does work extremely well and while I have been listening to the album, I have really been able to appreciate the words as well as the notes.

So, to sum up. Firstly I am kicking myself that I didn’t get to see “A Spoonful of Sherman” live but I am really glad I have the album. It is something that can be played anytime but I think will be particularly brilliant for families heading off on their summer holidays to stick on in the car and sing along with. From the youngest sprog through grumpy teenager to parents and grandparents this really is one of those albums with something for everyone and, no matter how hard they try, everyone will be joining in by the end. Magic.

I wouldn’t exactly say Ben Forster appearing as himself in this musical comedy is a career highlight (he is, after all, someone who has played the … END_OF_DOCUMENT_TOKEN_TO_BE_REPLACED

It’s an intricate plot, laced with some subversive humour - that the female character is simply called ‘The Woman’ (Molly Lynch), for instance, is … END_OF_DOCUMENT_TOKEN_TO_BE_REPLACED

Andrea McArdle didn’t, when the 1978 movie Rainbow was released, look or sound like Judy Garland, and she still doesn’t. You’d be forgiven for … END_OF_DOCUMENT_TOKEN_TO_BE_REPLACED

TENNIS ELBOW is the first play that John Byrne has written for thirteen years, and is in fact a companion piece to his critically successful Writer’s … END_OF_DOCUMENT_TOKEN_TO_BE_REPLACED

It’s all a bit banal, really - or perhaps I’m too heavily influenced by some of the other online productions that I’ve seen recently, which deal with … END_OF_DOCUMENT_TOKEN_TO_BE_REPLACED