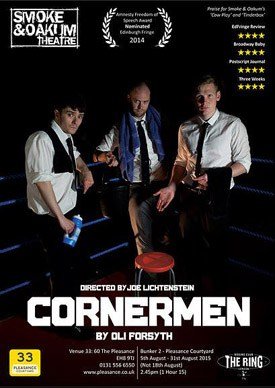 Simple stories are something of a rare commodity in show-business today: between overwhelming 3D CGI in cinemas and bombastic theatrical West End shows, you might assume that the appetite for unfussy, no-frills fiction was completely dead. But when you look a little harder and delve a little deeper you can find productions like Smoke & Oakum’s Cornermen: quietly, honestly, and deliberately telling a modest but compelling story with a lot of heart.

Life is cyclical, we are reminded by head coach Mickey, and that which goes up must come down: but sometimes when you go up someone else gets put down. The audience are beckoned into the frenetic and brutal world of boxing: from grimy amateur underbelly to diamond-encrusted, sportswear-endorsed crown. A team of three down-on-their-luck coaches, chance upon a young fighter they think could turn their fortunes around, and watch him rise – against the odds – to challenge the UK welterweight champion for the title. A simple story, and one that you’ve probably seen played out a hundred times before, from Million Dollar Baby and Senna, to Gilgamesh and the Odyssey. A hero must fight his way against the obstacles that are inevitably put in his way, before he can reign triumphant. Cornermen is no different: it follows a well-travelled narrative and gives us what we expect. And yet the certainty of the trajectory no less diminishes the fraught, frantic tension of the action because Cornermen invites us into the mythical tradition of the ancient narratives: we know what’s going to be told, but it’s the telling of it that makes us stay. Forget big-budget dazzle and ostentatious glitz, and let these actors take you back to Homer’s own enchanted tale-telling.

Naturally none of this could be achieved without the brilliance and charisma of the four actors invested in creating this drama: James Barbour’s Mickey provides the world-weary foil to his boisterous younger colleagues: the wonderfully chippy Joey (Oliver Forsyth – who puts in an excellent turn as an A-list American numbskull); and the occasionally moral Drew (Jesse Rutherford’s doubtful stumbles and stutters the fumbling of a man faced with the age old choice between good and bad). These three shadowy fates lurk corner-side at the boxing ring, their greased palms cradling the future of young Sid, our heroic boxer cajoled into turning professional and beginning his own odyssey (played with all the naive, brooding angst of the boy-becoming-man by Andrew Livingstone). Forsyth and Drew jump seamlessly between characters and scenes, the tragic chorus cheering and jeering ring-side as Mickey and Sid float like butterflies and sting like bees.

Nevertheless, for all its simplicity, this play is also a fascinating foray into a relatively untouched world: that of the boxing manager and trainer. Watching these characters rise from the murky backwaters to the star-studded pinnacle of professional boxing sees them faced with choices for which none are prepared. As the play progresses and Mickey, Joey, and Drew push the impressionable Sid to his breaking point, the shadows draw in from the edge of the performance space itself, and these men – springing from the very corners of life – circle like sharks to leave the audience wondering: who really is in your corner? Writer Oli Forsyth gives us no certain answers, but sometimes your toughest opponent may not be the one you’re fighting in the ring.

Cornermen
Using his experiences of life within the boxing world, Oliver Forsyth developed Cornermen after witnessing first hand the fierce competition and unrivalled focus on financial gain in an industry that regularly puts the mental and physical health of its backbone boxers on the line. This new play asks: when is enough, enough?

Mickey and his team of cornermen never seem to have much luck in the boxing world. The fighters they manage always end up losing and, after a disastrous last outing, no one wants to work with them. Until, that is, they sign a young boxer whose winning ways catapult them into a world of success they’ve never had before. However you can’t win all the time and soon Mickey has to choose between the life he’s enjoying, and the wellbeing of his young charge.

THE COMPANY
Smoke & Oakum Theatre was founded in 2013 by Oliver Forsyth when the company staged their debut show, The Cow Play, by Ed Harris, in Brighton, London and Edinburgh.

In 2014 Smoke & Oakum continued their commitment to new writing with their second play, Tinderbox, a political black comedy. Tinderbox began at Theatre503 before heading to the Edinburgh Fringe, where it was nominated for an Amnesty International Freedom of Speech Award. It later transferred to The Hen and Chickens Theatre in London for a week long run, where Smoke & Oakum are now a resident company.

There’s a warm and welcoming presence about Katie Arnstein anyway, although offering a sweet to audience members as we filed in helps too. Also, the … END_OF_DOCUMENT_TOKEN_TO_BE_REPLACED

The on-stage tiling makes it feel very much like certain scenes are set in a swimming pool, which may be stating the obvious but in a performance … END_OF_DOCUMENT_TOKEN_TO_BE_REPLACED

“I am a little bit of a nerd,” smiles Joe Sellman-Leava, playing himself, or at least a version of himself he’s willing to portray to audiences at the … END_OF_DOCUMENT_TOKEN_TO_BE_REPLACED

This is the kind of show that will preach largely to the converted, if not the choir itself, although this is probably by default rather than design. … END_OF_DOCUMENT_TOKEN_TO_BE_REPLACED

Cabaret is not just the name of a highly successful musical and film, but according to my good buddies at Wikipedia is a form of theatrical … END_OF_DOCUMENT_TOKEN_TO_BE_REPLACED