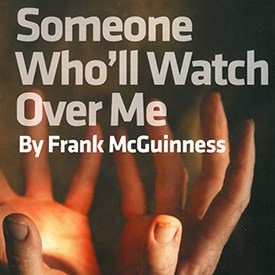 The Bridewell Theatre is a lovely intimate venue set out of the way that you might miss it if you didn’t know it was there. A gripping, brilliantly written play with a superb use of humour in such a harrowing story helping the audience “deal” with the topic by easing them into the situation, allowing them to come to some form of acknowledgement before the story darkens further.

The three actors contribute fantastically to this play taking us into this world with ease making it completely believable. They all deliver performances that should be commended so much so that I am unable to pick out a preferred actor, they were all fantastic.

The set is the most minimalistic I have ever seen. We have what is fundamentally a white box portraying the cell the captives are held in. Two radiators on the wall and that is it. Minimalistic it might be but the set is excellent being everything you need for the play.

The lighting is probably brighter than you’d imagine such a cell to be but it is done in a clever way that you still feel the captive’s world is dark. There is enough light so the actors are visible and facial expressions aren’t missed. It alters subtly through the play, which was a nice touch.

This is an excellent in-depth portrayal into how three men come to terms with their terrifying situation, their own mortality and their coping mechanisms for such an emotional and despondent capture. The whole cast and crew has created a wonderful piece of theatre and it is well worth making the effort to see one of the 6 performances.

Someone Who’ll Watch Over Me by Frank McGuinness
An Englishman, an Irishman and an American are locked in a cell in Beirut, Lebanon. Why they are in that cell is anybody’s guess, and why they are in Lebanon was their own. All three have been kidnapped and are being held hostage.

Someone Who’ll Watch Over Me, is playwright Frank McGuinness’s hymn to the defiant power of the human spirit and the creative imagination, inspired by the experiences of Brian Keenan and Terry Waite.

The Tower Theatre performing at the Bridewell Theatre, off Fleet Street
http://www.towertheatre.org.uk/

“Keep it shallow, keep it pretty, keep it moving,” declares Justin Vivian Bond, letting the audience determine for themselves what precisely is really … END_OF_DOCUMENT_TOKEN_TO_BE_REPLACED

This play didn’t do that well on Broadway the first time around in 1963, and did worse the second time around, even with a revised script, running in … END_OF_DOCUMENT_TOKEN_TO_BE_REPLACED

One of the very few good things about the COVID pandemic is that the opportunities to live stream theatre performances have increased exponentially, … END_OF_DOCUMENT_TOKEN_TO_BE_REPLACED

Exploring both the Jewish and Christian faiths, Candlesticks in some ways puts forward some good arguments for systems of belief that exist entirely … END_OF_DOCUMENT_TOKEN_TO_BE_REPLACED