Home » Reviews » Review of The Biograph Girl at Finborough Theatre 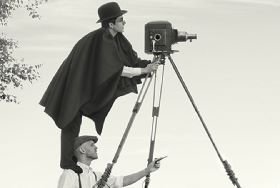 The Biograph Girl made its West End debut in November 1980 at the 1000-seater Phoenix Theatre with a production that had a cast of twelve and an orchestra of ten. Now it’s been revived at the fifty-seater Finborough Theatre with a cast of nine and an “orchestra” of one – and it’s probably all the better for the streamlining.

The set is very basic, with just four chairs on a raised platform, with other pieces of furniture stylishly brought on (sometimes “danced” on) and off by the members of the cast and three simple hung backdrops that are changed to denote New York, California and a luxurious, Hollywood mansion.

The Biograph Girl tells the story of the silent movie era taking us from the very early days of the “flickers” in 1912 where films were shot on the fly, often with no script and certainly with no stars, to the coming of the talkies in 1928. It recounts the stories of two iconic actresses of the time, Pickford and Lillian Gish interweaving their journeys from unknown stage actresses to movie stars with one of the most famous and autocratic directors, D. W. (David Wark) Griffith as he too goes from directing one-reelers to full-length epics such as Birth Of A Nation and Intolerance.

Written by the late David Heneker (“Half A Sixpence”, “Expresso Bongo”, “Irma La Douce” etc.) and Warner Brown (who updated the recent West End and Broadway production of “Half A Sixpence”), this superb forty-year-old musical has certainly stood the test of time.

The twenty-one songs are all excellent encompassing silent movie music, a pastiche or two and some modern ballads. The only song that didn’t work for me was “Rivers Of Time” which was cut from the original production and slowed the action down unnecessarily. The book compliments the music perfectly (or is that vice versa?) and Brown has written some superb dialogue. My favourite line comes when Pickford is bemoaning the clothes she is
made to wear in her twenties when she’s still playing twelve. She may hate the clothes but the shrewd businesswomen in her knows “There’s gold in them there frills”.

The performances are all terrific. Sophie Linder-Lee sings wonderfully as Mary Pickford, playing the part with a glint in her eye, a knowing nod to the audience and adding steel to her character when it’s needed. Emily Langham as Lillian Gish (who at the age of 87 attended the London premiere in 1980) is delightful as the ingenue who dedicates her life to Griffiths and becomes not only his leading actress but his muse and confidante. As Griffith, Jonathan Leinmuller shows us the vulnerability of this autocratic director and in his four solo songs, sings beautifully. The rest of the supporting cast are all spot-on but special mention must go to Matthew Cavendish as Mac Sennett who reminded me a lot of a young Donald O’Connor with his expressive face and uninhibited pratfalls.

Director Jenny Eastop ensures that this is a joyful piece of theatre and by cutting the production to its bare bones, we get to concentrate on the characters and their journeys over the sixteen years. In a very cramped space, Holly Hughes has choreographed some inspired dancing from the whole cast, especially Linder-Lee’s energetic tap-dancing. The women’s costumes are all beautiful and perfect for the period although the budget must have run out for the men as they’re mainly in suits that could have come from any era! And where was Griffith’s trademark fedora?

There are at least two wonderful, iconic musicals about silent movies such as Mack & Mabel and Singing In The Rain and The Biograph Girl is right up there with them. Neil McPherson the Artistic Director at the Finborough should be congratulated on reviving this marvellous musical which runs at one of London’s best “above a pub” theatres until June 9th.

From the composer of Half A Sixpence, a joyous musical celebration of Hollywood’s glorious era of silent film – beginning in 1912 when disreputable “flickers” are shown in fleapits and no self-respecting actor will appear in them, and ending in 1928 with movies now a glamorous, multi-million dollar industry and the first talking pictures signal the doom of silent films.

In a breathtaking sweep of just sixteen years, the great innovative directors created filmmaking as we know it today, groundbreaking movie moguls laid the foundations of the entertainment industry, and trailblazing actors launched the Hollywood star system.

Weaving together the heartbreaks and triumphs of the flawed genius director D. W. Griffith and the first movie stars Lilian Gish and Mary Pickford, The Biograph Girl is a love letter to the stardust and scandals of the silent movie era. The libretto has been especially revised for this production by its original co-writer Warner Brown and includes – for the very first time – the reintroduction of songs cut from the West End premiere production.

I had no idea such a movement existed, but it does: pickup artists ply their trade by sharing ideas about how to achieve sexual success with women. At … END_OF_DOCUMENT_TOKEN_TO_BE_REPLACED

If the audience were to be exposed to full versions of the seventy-four songs listed in the programme, it would be a very long show indeed. I suppose … END_OF_DOCUMENT_TOKEN_TO_BE_REPLACED

How can a play be both charming and devastating? Through its tight script, abundant humour and pitch-perfect performances, 4th Country manages to … END_OF_DOCUMENT_TOKEN_TO_BE_REPLACED