Home » Reviews » Review of The Harvest at Soho Theatre London 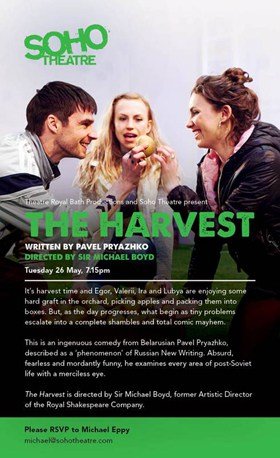 Picking apples is a simple job really. At least it should be, but in Pavel Pryazhko’s play “The Harvest”, currently at the Soho Theatre, the act of collecting fruit from an orchard becomes hysterically farcical as winter gets closer.

In a time and a place that is never specified, 4 young people are busy working in an orchard picking this year’s crop of apples and boxing them up for market. It is hard work as the apples have to be treated with great care to ensure they do not get bruised and spoil the others in the crate. The importance of this care is explained in great detail by Valerii (Dyfan Dwyfor) to his co-workers, Egor (Dayfdd Lly Thomas), Ira (Beth Park) and Lubya (Lindsey Campbell) who accept him as their leader since he knows most about the apples. Unfortunately, Valerii has left his masterclass a bit late and there is concern that one potentially bad apple may have already got into one of the crates and be working its magic on the others already. The search for this single rogue fruit starts a chain of events that escalates out of all proportion and simple acts, like the task of hitting a nail become epic problems requiring the combined efforts of all four pickers to overcome.

“The Harvest” is a really lovely piece of theatre. When you step into the auditorium the stage looks perfect and Designer Madeline Girling should really be applauded for the wonderful set. A truly beautiful orchard with grass, empty crates and literally hundreds of apples hanging down waiting to be picked. The gentle music starts and the pickers are suddenly working as if we had just dropped in on them, almost like overseers keeping an eye on our workers who know we are about and, whilst afraid of us, are also resentful of our inquisitiveness. Director Sir Michael Boyd brings his considerable experience to bear in his treatment of the story, starting amazingly gently with the apples being treated like precious jewels building the tension and ultimate hysteria to an really intense level so that, by the end, the disclaimer “no fruit was harmed in the course of this production” would have been a bigger lie than the last round of election manifestos. Along the way, we have a thrown apple, dodgy nails, crates that aren’t all they seem, frustration, anger, lots of blood, an inability to breathe and ultimately the most amazing piece of industrial fruit picking I have ever seen.

The four actors play off each other really well, with Valerii’s natural and slightly arrogant leadership never really being challenged except by the Egor who really wants to be thought of as one of the ‘cool kids’ and would love to have the two girls flirt with him the way they do with Valerii. Although both girls actually do brilliantly keeping Egor as a ‘back-burner boy’ whilst making it obvious they would rip each other’s hair out to get with Valerii.

Now I have to admit that I had never heard of Belarusian playwright Pavel Pryazhko until I saw “The Harvest”. So, after a quick search on Google I learnt that he is amazingly famous and has been described as a ‘phenomenon’ of Russian New Writing. Unusually, given the reputation of Russian playwrights for producing heavy, deeply significant pieces, “The Harvest” is a deceptively light and highly enjoyable piece of prose which, if I’m honest left me a little frustrated. As we left the theatre I was trying to work out what I had seen plot-wise and why I felt that I had missed something very significant in the story. Someone behind me was talking about the play being an analogy for the collapse of the Soviet Union after 1989. In fact the Soho Theatre’s website says this about the play ‘Absurd, fearless and mordantly funny, he examines every area of post-Soviet life with a merciless eye.’ Not sure I agree, but thinking about it afterwards, I realised I saw it being more a story of life itself. From the extremely well ordered and controlled environment of being a baby through the fun of childhood, to the frenetic life of a teenager where all the rules go out of the window and it’s finally OK to snub your nose at authority.

I think the reality is, there is enough ambiguity in the symbolism of the piece that each audience member can read what they like in the story and ultimately does it matter if there is some deep seated message out there? Probably not, because after sixty minutes I guarantee that you will leave the theatre really happy at seeing such a well-crafted and highly enjoyable piece of theatre that you will be discussing for quite a while afterwards.

The Harvest is a funny and surprising critique of autocratic leadership from Pavel Pryazhko described as a phenomenon of Russian new writing. It’s harvest time and Egor, Valerii, Ira and Lyuba are enjoying some hard graft in the orchard, picking apples and packing them into boxes. But as the day progresses, what begin as tiny problems escalate into a complete shambles and total comic mayhem. Lambasting the political elite, this allegory is a comic portrait of dismal failure, the social pecking order and the unhappiness of everyone with their leadership.

Pryazhko’s plays have been staged all over Eastern Europe including Russia, Belarus and Ukraine. He has a cult following in Moscow, his absurd, fearless and mordantly funny writing examines post-Soviet life with a merciless eye.

Directing this UK premiere of The Harvest is Sir Michael Boyd, former Artistic Director of the Royal Shakespeare Company (2002-2012). During his tenure at the RSC his credits included Shakespeare’s eight-play Oliver Award-Winning history cycle The Histories. He also developed the company’s record-breaking production of Matilda The Musical for Stratford, London and New York.

There were moments in Two Billion Beats when one wonders if the youth of today really do talk in the way in which the script says they do. Do they … END_OF_DOCUMENT_TOKEN_TO_BE_REPLACED

I have spent much of the last thirteen months of Lockdown (it seems a great deal longer!) in trying to avoid ZOOM meetings, but Dr Will Houstoun’s The … END_OF_DOCUMENT_TOKEN_TO_BE_REPLACED

Diplomacy is better than brute force, though in Ali Stroker’s case it wasn’t so much consultation and dialogue that secured her roles across film, … END_OF_DOCUMENT_TOKEN_TO_BE_REPLACED

This was like an eighty-minute meeting that could have been an email. The only worthy bit of narrative was a few sentences, printed white text on a … END_OF_DOCUMENT_TOKEN_TO_BE_REPLACED