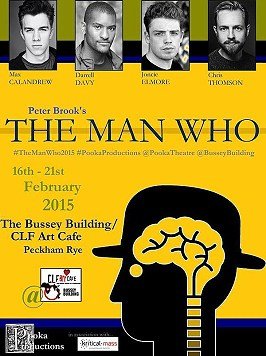 How do you review a play that isn’t a play? That’s the conundrum facing me as I sit at my keyboard and think about “The Man Who”, the first production from Pooka Theatre currently playing at the Bussey Building/CLF Art Cafe Peckham.

So, if “The Man Who” isn’t a play then what is it you may ask? Well, in its simplest form it’s a series of small playlets highlighting various neurological disorders being discussed by patients and doctors. Over 16 short scenes, the four strong cast (Max Calendrew, Darrell Davy, Joncie Elmore and Chris Thomson – who also doubles as Musical Director) bring individual stories to life using well-worded and succinct detail to show the audience what it is to be afflicted and have to cope with different types of disorder. There was a wide range of disorders examined and all were done in a sympathetic but not overly sentimental way. As you would expect, certain scenes/stories will stay with you more than others and a couple really stood out for me, No 4, ‘Autist’ was really powerful. Being slightly on the OCD spectrum myself, this was a fascinating scene as I could to a very limited extent identify with the patient’s anger when interrupted as he took his personally allocated number of steps to the exit. No 14, ‘The Dream’ was another really fascinating story as the patient was so convinced he was living inside a dream, he was prepared to go to amazingly extreme lengths to, as he believed, ‘wake himself up’. This was one story that I actually wanted to know more about the patient and how/if he could be treated.

The direction is tight and the set minimal – at times just a single white chair is all that is on stage and this really works well for this production which is about the patients – not their complicated back stories or history – but what they are going through at this moment in time and the medical staff attempting to treat them where possible. The decision to move the actors from doctor to patient and back again worked really well and was enhanced by their clothing – black shoes, dark blue trousers and blue button down collared shirts for the patients, the same but with a white coat for the doctors.

Like many people I wasn’t aware of some of the things people go through on a daily basis, sometimes without knowing it, when the mind doesn’t perform as expected. Like the rest of the audience I laughed at times, and then immediately felt guilty that I had found humour in the patient’s suffering. This was particularly true in No 5, ‘The Man From La Rochelle’ where a story about a bear and bicycle was amusing and uncomfortable at the same time. No 12, ‘Ticker’ was fascinating in this respect. I recently saw a show where they used a Tourette’s sufferer as a comedic device which, on the whole worked for the majority of the audience, but seeing it accurately portrayed in “The Man Who” really brought home the awfulness of living with the syndrome on a 24/7 basis.

“The Man Who” was written by acclaimed theatre director Peter Brook and last performed in the UK in 1995. I’m surprised that it has been in hibernation so long as it is such a powerful performance piece. This revival is being delivered by an assured and confident cast of highly talented actors and, even without the happy endings so beloved of modern day theatre, will engage and mesmerise its audience from start to finish.

Pooka Productions Presents The Man Who written by Peter Brook
16th – 21st February 2015
Based on the best-selling novel ‘The Man Who Mistook His Wife For A Hat’ by Dr Oliver Sacks, ‘The Man Who’ recounts the stories of patients lost in the bizarre apparently inescapable word of neurological disorders. These are case studies of people who have lost their memories and with them the greater part of their pasts; who are no longer able to recognise people or common objects; whose limbs have become alien; who are afflicted and yet are gifted with uncanny artistic or mathematical talents. Each tale is a unique and deeply human study of life struggling against incredible adversity.

In Pooka Theatre’s very first venture, we bring you Peter Brook’s ‘The Man Who’, for the first time since it was first performed at the National Theatre in 1995. Come and join us at the intimate and atmospheric Bussey Building, a favourite venue of the Royal Court’s, for a look at the misunderstood world of neurological disorders.

It is the duty of every citizen to answer the call to support and protect the United Kingdom and its allies so last night, while the rest of the … END_OF_DOCUMENT_TOKEN_TO_BE_REPLACED

Harold Pinter only ever wrote one novel. And, let's be honest, he didn’t rush into this literary endeavour. He started it in 1950 and the book was … END_OF_DOCUMENT_TOKEN_TO_BE_REPLACED

How far would you go for the people you love? What lies would you tell? What sacrifices would you make? That’s the question at the heart of The … END_OF_DOCUMENT_TOKEN_TO_BE_REPLACED

“All political lives, unless they are cut off in midstream at a happy juncture, end in failure, because that is the nature of politics and of human … END_OF_DOCUMENT_TOKEN_TO_BE_REPLACED