Home » Reviews » Review of The Nobodies at The Vault Festival 2020 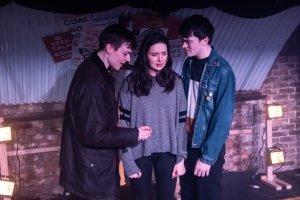 The pre-show music doesn’t change as the audience files in, to the point where I started to wonder whether we would be treated (or subjected, depending on one’s viewpoint) to ‘Solidarity Forever’ – forever. Being a theatregoer and not a trade union activist, I only knew the version in Billy Elliot the Musical. Anyway, The Nobodies is essentially about people outside the establishment taking a stand against the permanent closure of an NHS hospital, but Aaron (David Angland), Curtis (Joseph Reed) and Rhea (Lucy Simpson) use tactics other than the usual protest marches and letter writing.

Possibly due to the fast-paced nature of this one-act, one-hour show, I missed the exact details of how they obtained the private contact details of the various people who had put in bids for the property on which the hospital earmarked for closure sits. What is clear is that, at least in the minds of this trio, the closure is being done purely in the name of greed and profiteering – and for one of the characters, the dangers inherent in having to travel some thirty miles to the nearest hospital in case of emergency becomes very real.

The performances are certainly energetic, at one point incorporating a Zumba workout into a conversation, and as props are moved about and a yellow line put in place to set up a railway station platform, the dialogue continues apace – the wait for a train might be typically long, but there’s no downtime for either audience or cast. The show’s programme is largely made up of a ‘manifesto’ for ‘The Nobodies’, which goes far beyond saving a hospital from closing. For instance, it calls for “the centralisation of the means of communication, energy and transport in the hands of the state”. I am still not sure what that would entail besides nationalisation of utilities – would nobody be allowed to call a car or a mobile phone their own?

One by one, under pressure from The Nobodies, the bidders for the hospital’s land and property fall away. One of them does so much of a U-turn she puts out a statement calling for the hospital to remain open. Their methods might well be morally dubious, but there’s little doubting their effectiveness. For Curtis in particular, though, the positive outcome is a mere springboard to more action and more influence: having pressurised captains of industry away from buying up hospital land, he wants to persuade parliamentarians towards his version of socialism. Aaron is supportive, while Rhea has sound reasons for backing out.

The call to arms seems all the more significant in the light of the 2019 General Election, in which a larger than expected number of constituencies returned a Conservative MP, including ones in former mining communities. The show begins by praising Margaret Thatcher, for bringing people in devastated areas together in unity against the reforms of the Government of the day. There are moments of hilarity in this highly charged piece of theatre, and there are moments of despair, taking the characters through a wide range of human emotion, all expressed convincingly.

There’s plenty of optimism in this show, which seems to portray a world in which The Nobodies can go about their work relatively unimpeded, underestimating the sheer amount of resistance and/or retaliation the establishment is almost sure to put up. The production asks what lengths are appropriate to go to further the cause of something that one believes very firmly in, and some pertinent questions are also posed – reading between the lines, that is – about whether the use of strong-hand tactics by the Left makes those who dare to do so just as bad as those on the Right who deploy remarkably similar methods, albeit for very different purposes. An enthusiastic and engaging effort from a hard-working cast.

THE NOBODIES
WRITTEN BY AMY GUYLER
A town is in turmoil. A hospital is closing. And an MP is dead on the train tracks… Accident? Or opportunity?
Healthcare Assistant Rhea is forced to look for work elsewhere. Local lad Aaron worries about his mum’s treatment in the cancer unit. And Curtis just isn’t sure where he’s going to sleep.

But when the three witness a horrific accident, a rare opportunity presents itself.

As a dangerous decision triggers a wild chain of events, Rhea, Aaron and Curtis soon find themselves gathering power, influence and infamy – and inspiring a cohort of vigilante activists.

What does it take to enact real change? And what would you sacrifice to keep it?