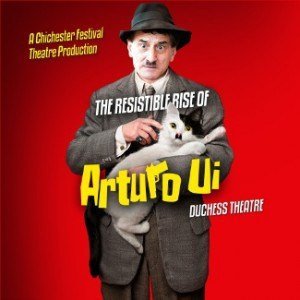 The Resistible Rise of Arturo Ui was written in 1941 by Bertolt Brecht, a German Marxist theatre practitioner, playwright and poet, while in exile in Finland. I was familiar with his style (known as ‘Epic Theatre’) through my university days. Though fascinated with his work during my studies, my initial thoughts were ‘how would a modern day West End audience relate to it?’

Although it’s not essential for the audience to know the details of Nazi Germany or Brecht’s practice methods, it was useful for me to re-visit a couple of my study notes. ‘Epic Theatre’ communicates a story familiar to the audience, in ‘Arturo’s’ case it certainly shows a metaphor akin to the rise of Hitler. Brecht’s objective with his style was to make the piece unsensational, to strip away the disguise that dramatic theatre can often encourage with vast illusions of reality and allow the audience to reflect critically on what they had just witnessed. One of the goals of epic theatre is that the audience are always aware that they are watching a play, there is no comfort of escapism with Brecht!

My initial worries of how the audience would take to this were immediately put to rest the second I stepped into the auditorium.

We find ourselves taking our seats watching a 1930s Chicago jazz club scene and then, true to Brecht’s style, it opens with a direct address to the audience introducing all the major characters and explaining the purpose of the plot, encouraging us to focus on the message than the suspense of what may happen next.

The 2 hours that followed simply left me in a state of ‘Wow’. In fact, I couldn’t wait for the interval to be over.

Henry Goodman, takes the lead as ‘Arturo Ui’ and gives a performance that shows the world exactly why he is one of the finest stage actors of all time. He literally bounds onto the stage bursting through a poster in the Jazz club and takes the audience on a journey that presents Ui’s evolution from a nobody to a monstrous tyrant; craving control over the city of Chicago and its neighbouring town Cicero and eventually the whole of Americas Cauliflower trade (!) by ruthlessly disposing the opposition during the time of the great depression. Goodman’s comic timing and ‘Chaplinesque’ physical portrayal has the audience in fits of laughter but then in an instant feeling deeply uncomfortable. This is perfectly executed in the scene where Ui is taught by a boozy ham actor (wonderfully portrayed by Keith Baxter) how to deliver Marc Anthony’s speech from Shakespeare’s Julius Caesar, as the lesson in body language and how to command power over an audience unfolds, the physical parallel of Hitler emerges. You can almost hear the gasps from the audience – I wanted to look away, but I couldn’t bear to.

Goodman is supported by a strong cast (all the characters in the play represent key figures in Hitler’s rise). Standout performances for me were Ui’s gangsters Ernesto Roma (Röhm) played by Michael Feast and Joe McGann as Emanuele Giri (Goring) – Lizzy McInnerny is also outstanding as Betty Dullfoot, who Ui is trying to woo having just murdered her husband.

The director Jonathan Church has delivered a fine interpretation of a Brechtian masterpiece and doesn’t miss any opportunity. The stage is cleverly extended out to the exit at the back of the auditorium, so if the audience wanted that fourth wall, they weren’t gonna get it!

Church manages to engage the audience throughout, as when it comes to that moment during some shows where you get a little fidgety in your seat and start to check the time, well that didn’t happen for me. A final gasp from the audience comes on the delivery of Goodman’s last line, Brecht’s famous warning chillingly out of character, that, even if Hitler is dead, “the bitch that bore him is in heat again“.

True to Brecht’s intent, the audience were discussing this point as exiting the auditorium.

A truly thought provoking, intelligent piece of theatre. It won’t be to everyone’s taste, but if like me you like to push your comfort zones from time to time, it’s certainly one not to miss.

Harold Shipman, known to his many patients, family and friends as ‘Fred’, was Britain’s worst serial killer. The official inquiry into his crimes … END_OF_DOCUMENT_TOKEN_TO_BE_REPLACED

Being one of Arthur Miller’s best-made and most challenging plays, The Crucible is also one of his most frequently performed. I was going to say … END_OF_DOCUMENT_TOKEN_TO_BE_REPLACED

To be fair, Linda Lavin called her concert Love Notes, there’s an album of the same name, and that’s more or less what it was about - variations on … END_OF_DOCUMENT_TOKEN_TO_BE_REPLACED

Noughts & Crosses is a euphemism for blacks and whites. The Noughts are the whites and the Crosses are the blacks. In the world of the play, the … END_OF_DOCUMENT_TOKEN_TO_BE_REPLACED

This ‘juke box’ musical offers highly polished, undemanding, feel-good entertainment, showcasing, as it does, 30 songs dating from the 1960s to the … END_OF_DOCUMENT_TOKEN_TO_BE_REPLACED