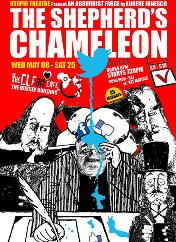 Ionesco! Ionesco! Are you there? Ionesco!

It’s happened to all of us. You’re trying to finish a piece of work: a script or spreadsheet, manifesto or manuscript. But your boss/colleague/significant other is peering over your shoulder, asking whether the work is finished. When can they see it? Have you thought about ‘x’, ‘y’ or ‘z’? Wouldn’t you be better doing it another way?

While pressure to perform can be motivating, it can also be irritating, claustrophobic, stifling, and counterproductive. Rather than allowing ideas to germinate naturally, shoots are forced from the ground, and growth and development is stinted.

It’s a bugbear for many, though it seems that the artiste, wishing to express his or her ideas creatively, feels the pressure to conform most acutely. Through The Shepherd’s Chameleon, Romanian playwright Ionesco expresses his frustration: he clearly felt that his critics and management were forever trying to prescribe how his work should be created and performed.

The play centres on Ionesco’s visit from three critics, Bartholomew I, II and III. In a manner reminiscent of the Mad Hatter’s Tea Party, the three Bartholomews advise Ionesco on the writing of a new script. However, their advice quickly morphs into imposition, regulation, and the destruction of Ionesco’s creativity.

The Shepherd’s Chameleon is the launch-pad for Peckham’s Utopia Theatre group, directed by Moji Kareem. Being an absurdist farce, the storyline is far from straightforward. However, Kareem’s surreal yet captivating combination of words, movement, sound, and props allow Ionesco’s point to emerge.

The cast of four were excellent: of particular note are Lucie Chester and Olivia Nicholson, playing Bartholomew I and II. Chester is a commanding actress with strength and poise, and Nicholson has a real ability to express character through movement and expression.

Speaking to me after the performance, artistic director Moji said she hoped to bring out multiple layers of ideas and symbolism through the actors’ versatility: including the concept that life doesn’t always require analysis – sometimes it’s better to inspect, than dissect:

“You can come away from the most mundane things and still find some excitement and exhilaration out of it. Even simple actions like ripping pages out of a book can be beautiful,” Moji explained, referring to the first scene in the play, where two of Ianesco’s critics robotically tear pages from novels as they read.

“A lot of people, when they hear ‘theatre of the absurd’, they say, ‘I don’t want to go and see it’,” she continued. However, she feels that theatregoers will be pleasantly surprised with this “madcap world of absurdist comedy”, as long as they “come into it with an open mind”.  So put down that pie chart, save the spreadsheet for another day, and enter the world of the surreal.

Harold Shipman, known to his many patients, family and friends as ‘Fred’, was Britain’s worst serial killer. The official inquiry into his crimes … END_OF_DOCUMENT_TOKEN_TO_BE_REPLACED

Being one of Arthur Miller’s best-made and most challenging plays, The Crucible is also one of his most frequently performed. I was going to say … END_OF_DOCUMENT_TOKEN_TO_BE_REPLACED

To be fair, Linda Lavin called her concert Love Notes, there’s an album of the same name, and that’s more or less what it was about - variations on … END_OF_DOCUMENT_TOKEN_TO_BE_REPLACED

Noughts & Crosses is a euphemism for blacks and whites. The Noughts are the whites and the Crosses are the blacks. In the world of the play, the … END_OF_DOCUMENT_TOKEN_TO_BE_REPLACED

This ‘juke box’ musical offers highly polished, undemanding, feel-good entertainment, showcasing, as it does, 30 songs dating from the 1960s to the … END_OF_DOCUMENT_TOKEN_TO_BE_REPLACED