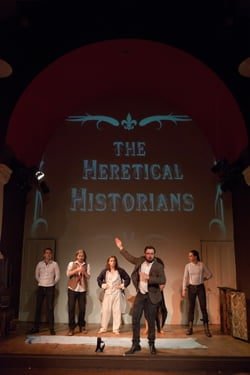 A relatively short review for a relatively short play. “Ladies and gentlemen, and esteemed miscellaneous,” beams Larry (Matthew Jameson), a remarkably (and, I suspect, possibly deliberately) topical opening, in the light of a decision by Transport for London, publicised in the press hours before the performance I attended, to stop using ‘ladies and gentlemen’ in its public address announcements, in favour of ‘hello everyone’ or similar gender-neutral phrasing.

Events proper in this slightly barmy production, The Trial of Le Singe, begin in the North Sea in 1815. Sea spit immerses the audience (quite how would be revealing too much) before characters start speaking in faux French, like something out of ‘Allo ‘Allo. Take umbrage or take pleasure, whatever your disposition. Not for nothing is this theatrical group called ‘The Heretical Historians’, and with no monarch (of whatever kingdom) present, treason and/or being ‘sent to the Tower’ were never on the cards: they really were at liberty to say whatever they liked.

So when a question of money arose, ‘Atless ‘Arry (Leah Kirby) points out that we are the vicinity of Canary Wharf, so one of the financial institutions should be able to assist in securing some cash. Breaches of the fourth wall of this nature added to the anarchic nature of this fun-filled hour-long performance, which seemed to lurch between nineteenth-century manners of speaking to contemporary standards of securing a fair hearing in the actual trial of Le Singe (Salvatore Scarpa).

There were times, I must admit when I didn’t have the foggiest idea what precisely was going on. Lord Garrington (a suitably dapper Lloyd McDonagh) arrives at a pub called The New Red Lion, sub-headed “a future JD Wetherspoon”. The use of video projections ensures the setting of each scene was clear, and the production also finds ways of acknowledging the limitations of staging a play. “Where are you going to find sand in London?” sneers ‘Arry, spreading around what the audience must assume to be sand for a scene at the beach. Poor ‘Arry. He keeps forgetting the show is set in Hartlepool.

It’s cleverly written, even for those who aren’t particularly appreciative of the show’s style of humour. Le Singe, when he finally takes to the witness stand, proves himself more eloquent than everyone else, such that Larry, who has now assumed the role of the judge in this seemingly impromptu trial, can only reply that he has no idea what the apparent Frenchman is talking about.

Elsewhere, there’s something of the stage adaptation of The 39 Steps about this production, both in terms of its purposefully cheap set (some expense has, at least, gone into the costumes) and almost relentlessly brisk pacing. Sally (Bertie Cox) is a tribute, in effect, to a bygone era in which male actors played female characters. This being a comedy, a lot of action is hammed up, but it’s all done with great aplomb.

Based on the ridiculous true story of The Hartlepool Monkey: A shipwrecked monkey who washed ashore in North-East England during The Napoleonic Wars, who was mistaken by the local population for a French spy and put on trial for treason. A sadly relevant tale of misinformation, nationalism and scapegoating, which serves as a warning parable for the consequences of unchecked fear-mongering in the age of post-Brexit Britain and Trump’s America.

Heavily influenced by a fusion of punk culture and music hall styles, The Trial of Le Singe is an anarchic, pitch-black farce for an angry disenfranchised generation. Promising low-budget chaos, dramatic set pieces (including a spectacular ship-wreck) and the sharpest satire this side of a 30s Berlin Cabaret.

Like most people, I think, I often have mixed feelings about a show I see. Occasionally, though it is rare, there will be a production where … END_OF_DOCUMENT_TOKEN_TO_BE_REPLACED

“The times they are a-changin'”, as Bob Dylan put it - and as a deceased woman’s grandson (Phillip Jones) returns home to attend the funeral, the … END_OF_DOCUMENT_TOKEN_TO_BE_REPLACED

It’s not often that the entertainment tastes of an intellectually snobby middle-aged woman and an action-mad 10-year-old boy align perfectly, but … END_OF_DOCUMENT_TOKEN_TO_BE_REPLACED

Notre Dame is the latest digital production by Threedumb Theatre, live-streamed from The Space in Canary Wharf, London and directed by Stephen Smith, … END_OF_DOCUMENT_TOKEN_TO_BE_REPLACED