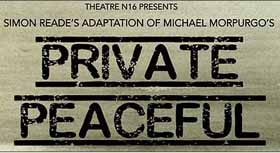 You wouldn’t be wrong to assume something is a bit out of place when a theatre company called N16 is based in Balham with the postcode SW12. Thankfully, my confusion was short lived as the producers explained to us all that they had moved – but when you’ve already got a website and logos and marketing done, why should a case of losing your N16 venue make you change your name?

N16 has just started its first season in the lovely venue of the Bedford in Balham, already well known as a concert and comedy venue. The theatre is at the top of the building and is a small, intimate space. The first show produced is a double bill of one man shows, Bottleneck by Luke Barnes and Private Peaceful by Michael Morpurgo, adapted by Simon Reade.

Private Peaceful, about a young man’s life on a farm and subsequent tour in World War I is performed by Shana Swash. It’s a bold move to have a woman play a young man, but it’s a risk that in this case paid off well. The action cuts between Tommo Peaceful telling us about his life growing up, to Chris Palamountain reading his journal in the current day, with a countdown going behind him whenever we’re in the present. It’s revealed straight away that Tommo was executed for cowardice during the war and has been posthumously pardoned. Palmountain is reading his journal of the night coming up to the execution.

Swash is a wonderfully energetic and physical actress and while we all know she’s a woman, she does capture the youthful energy of young Tommo, and later his fear and desperation as he is the trenches of World War 1 with his big brother. She stumbles over some of the lines, but she’s engaging and interesting to watch. The play is rather intense from start to finish and as such a bit draining to watch, but it’s a very good play well performed. 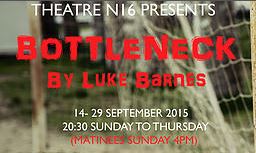 After the interval, Will Mytum is ready for us in Bottleneck, all teenage energy and crude jokes, running all over the place. The swear words are one every few seconds, the jokes are constant and after the intensity of Private Peaceful, it’s a relief to be able to laugh out loud. Greg the 14 year old is obsessed with football, a bit of a delinquent and lives with his father in an estate. I will never think of quavers the same way again, and I can honestly say it’s the only time I’ve been crawled over while watching a play.

As an audience, we settle in and get comfortable, and think we know what we’re watching, a fun coming of age story, until it hits you that this play is set in the 80s, your teenage football fan is at a football match in Sheffield and he said ‘the gates are open’. I think most of the audience realised instantly what we were about to watch, and the effect is devastating.

A masterful, powerful performance by Mytum that left my companion and I stunned. All in all a fantastic evening and we expect great things from N16 from the future based on this initial visit.

Theatre N16 present Simon Reade’s adaptation of Michael Morpurgo’s Private Peaceful
During the night Tommo Peaceful looks back at her short but joyful past growing up in rural Devon: her exciting first days at school; the accident in the forest that killed her father; her adventures with Molly, the love of her life; and the battles and injustices of war that brought her to the front line.
A new exciting rendition of a family classic with kind permission from Michael Morpurgo and Simon Reade.
Starring former Eastenders Star Shana Swash

Theatre N16 present Luke Barnes’ Bottleneck
Am I a virgin? I think I am. I mean it went in her but it was floppy and it wasn’t very nice so I think I am a virgin. I’m going to say I am. Will look better on me uni applications.
Liverpool, 1989.
Greg is 14 and a red for life. A coming of age comedy that tears at the heart strings.
Kind permission by Luke Barnes

“Keep it shallow, keep it pretty, keep it moving,” declares Justin Vivian Bond, letting the audience determine for themselves what precisely is really … END_OF_DOCUMENT_TOKEN_TO_BE_REPLACED

This play didn’t do that well on Broadway the first time around in 1963, and did worse the second time around, even with a revised script, running in … END_OF_DOCUMENT_TOKEN_TO_BE_REPLACED

One of the very few good things about the COVID pandemic is that the opportunities to live stream theatre performances have increased exponentially, … END_OF_DOCUMENT_TOKEN_TO_BE_REPLACED

Exploring both the Jewish and Christian faiths, Candlesticks in some ways puts forward some good arguments for systems of belief that exist entirely … END_OF_DOCUMENT_TOKEN_TO_BE_REPLACED