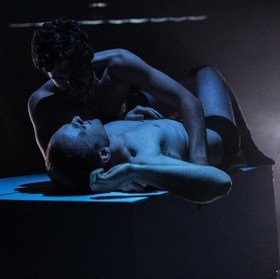 After a slow start, Circa gets progressively pacier until it reaches an almighty crescendo. But I didn’t know that come the interval, and was relieved to come up for air after a humdrum first half. I might, had it not been grossly unfair to review half a show, have considered leaving. At the performance I attended everyone stayed (or at least, everyone in my section), and our patience was handsomely rewarded with the coming of age and beyond experiences of The Man (Scott Westwood). In a series of personal encounters with various characters, The Man – whose actual name I don’t recall being mentioned – goes through life. I had attempted to continue that sentence several times, but ‘goes through life’ sums it up sufficiently enough, and without divulging too much narrative.

I did wonder, though, whether The Man was pursuing sexual relations for the sake of it. In the opening scene with The Older Man (David Meyer), The Man wants to jump into bed immediately, but his companion is would (rightly) prefer to chat and get to know The Man a little bit – the pair are meeting in person for the first time having previously ‘met’ on the internet. For one reason or another – always credible reasons, mind you – The Man’s various attempts at getting laid are initially a series of failures, until he simply pays for it. I do not mean anything metaphorical by this. The Rent Boy (a hugely likeable Thomas Flynn) shows up. Some of the other characters do have actual names, revealed in the dialogue, but not in the cast list, so I keep faith with the latter.

But even in this long conversation, it’s clear The Man is after something deeper than just bedroom activity. The whole piece is incredibly naturalistic throughout, and The Man’s awkwardness and discomfort, which he never fully shakes off, despite evidently growing in confidence as the years’ pass, is palpable. Parts of the narrative feel as though they’ve been done elsewhere before. That is because there are still things that have not changed for a young gay man, particularly the courage to ‘come out’ to a family that may not be accepted even in these allegedly enlightened times.

The play even seems to imply that it is more difficult to come out now than it was a generation ago. Some people, perhaps most people, have no qualms or reservations whatsoever about someone in their family being gay, although others still do. The end result is that there are no textbook methods or strategies that can be relied upon to deal with a wave of hostility that may or may not even come about.

There is an interesting exploration, too, of what gay marriage really means. Being on a par with straight people, according to The Partner (Nathan Webb), means there is nothing distinctive about being gay, and perhaps that’s not what he wants for his own life, while respecting what others would like for theirs.

There are so many stagehands at work keeping scene change times to a minimum that it took me a while to realise the actors were doubling up as stagehands. Dressed in notably darker clothing than their characters, there are, in effect, more costume changes going on than I originally thought. I hesitated for as long as I could to label the staging and props as being ‘poor school’ style, but when a balcony was depicted with just a plank of wood held between two actors as stagehands aloft, so as to form the balcony rail, I relented. It works, though, and everything flows very smoothly whether or not the obvious production budgetary constraints are taken into account.

I suppose all that male flesh on display at intermittent points may have held more sway for me (that is, some sway in the first place) had I been a woman or a gay man, and had this been the National Theatre, The Man would very probably have gone fully nude at least once. It was good to see a show that doesn’t try to smooth over some pertinent issues affecting the LGBT+ community with exaggerated drag routines and overly loud music – though, of course, these, done well, as they are in some other shows, are thrillingly enjoyable in their own way.

Circa tackles a range of issues head on in an increasingly deep and fascinating exploration – yes, of what it means to be a gay person, but more widely, what it means to be human. I’m pleased there are no set-in-stone answers provided in this most thoughtful debut play from Tom Ratcliffe. As audiences shout at concerts and gigs after a band has done a good job, “More! More!”

Circa
A new play by Tom Ratcliffe
Directed by Joe Allan

Fresh from a world première at the Theater de Meervaart, Amsterdam, earlier this year, Circa comes to London and The Vaults for it’s UK première this June as part of Pride in London.

«That’s what everyone says isn’t it? Gay men shag everything. Disease and all that.
My mum, when I came out, the first thing she said to me was ‘don’t get AIDS’…
But things are different now. They’ll be different for us.»

The twenty-first century. Homosexuality is now more integrated than ever. Marriage is legal, parenthood is possible and ‘homophobics’ are now the one’s shunned from society. The time has arrived to replace promiscuity with ever-lasting companionship: but is it really that simple?

Circa follows the story of a man’s navigation through romantic life, exploring the dangers of expectation and how relationships can shape you into a person you never expected to become.

If the dialogue wasn’t quite so eclectic and engaging, I might have decided to attempt to have kept a tally of how many times a trestle table is … END_OF_DOCUMENT_TOKEN_TO_BE_REPLACED

Doctor Who: Time Fracture by Immersive Everywhere has plenty to exhilarate both avid and casual Doctor Who fans, delivering on its promise to let … END_OF_DOCUMENT_TOKEN_TO_BE_REPLACED

A brief review of a brief play. It is, as the Prime Minister (Lisa Day) observes, extremely unlikely that her ‘letter of last resort’ would ever … END_OF_DOCUMENT_TOKEN_TO_BE_REPLACED

It’s a production of Hamlet that starts at 7:30pm and manages to come down on the ‘right’ side of 10:30pm - the hardcore fans and followers of … END_OF_DOCUMENT_TOKEN_TO_BE_REPLACED

For seasoned theatregoers, this version of The Three Musketeers comes across as one of those shows that takes a similar format to something one has … END_OF_DOCUMENT_TOKEN_TO_BE_REPLACED