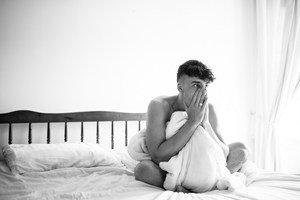 Torn Apart (Dissolution), written and directed by Bj McNeill, is an intense and compelling drama about three couples. Though their stories take place years and miles apart, there’s a common theme of love and loss – not only of partners but of family, home and history – as well as an actual connection between the three that’s revealed a little at a time, with the final piece falling into place just moments before the end.

In 1980s West Germany, young Polish student Alina (Nastazja Somers) falls for an American soldier (Simon Donohue), even though she knows that sooner or later he’ll have to follow his duty and leave her behind. In 1999, Elliott (Elliott Rogers), a chef from London, and Casey (Christina Baston), a backpacker from Melbourne, try to come to terms with the fact their relationship has an expiry date dictated by the Home Office. And in present day Britain, Holly (Sarah Hastings) finally plucks up the courage to leave her perfect husband for Erika (Monty Leigh), but their new-found happiness is threatened by devastating news.

Szymon Ruszczewski’s set is visually striking: the stage, at the centre of which is a double bed, is enclosed within a large cage made of string. This creates a space that is at once intimate and claustrophobic – inside it the lovers make plans, laugh, dance, argue, have sex, and share the complex family histories that ultimately bind them together. At times they play with and caress the strings that surround them, while at others they reach out through them in a desperate attempt to be free.

The play holds nothing back, in emotional or physical terms, and the audience is placed in the sometimes quite uncomfortable position of the voyeur, watching a series of deeply private encounters unfold. This effect is heightened by the absence of a curtain call; as we leave the theatre, two of the actors remain on stage in a final embrace, seemingly unaware that we’ve ever been there (similarly, the action is already underway as we enter, with the same two actors enjoying a night of passion that leaves little to the imagination).

The play is gripping throughout, with some powerful performances from its excellent cast. Elliott Rogers and Monty Leigh are particularly impressive as two of the most damaged characters, Elliott and Erika, who simultaneously can’t believe their luck and are terrified of losing the person they love to forces beyond their control. It’s only at the end that the play seems to suddenly run out of energy. A crucial closing scene is unnecessarily repetitive and takes rather too long to make its point, which means we lose momentum in the run-up to the big final revelation, and it doesn’t have quite the dramatic impact that it should.

Torn Apart (Dissolution) is a love story, but not in the traditional sense; nobody’s riding off into the sunset in this tale. It makes us pause and consider what love means to us – is it something to be desired, or feared? And yet, surprisingly, this is not as bleak a story as it might sound. Each of the characters gains something from their relationship, even if it’s just the memory of what it feels like to be loved, perhaps for the first time in their life. So while it’s not a happy ending, it’s not without an element of hope as well.

Full of drama, passion and emotion, Torn Apart is a heartfelt and ambitious play that speaks to us all in some way. If it could maintain its pace and energy right to the end, there’s a powerful piece of theatre here.

This is a love story. A love story set in three different times and three different bedrooms…
West Germany, Bremen, the early 1980s. The universities and cafes are full of young people who escaped from the East, the bars are full of American soldiers. Alina, a Polish literature student, bumps into one of them.

London, 1999. The turn of the century. Elliott, a young chef is dating Casey, an Australian backpacker. Whilst eating Indian food and listening to RHCP, Elliott talks to Casey about his orphanage and his love for her. She listens knowing that, sooner or later, her Visa will run out.

London, now. Holly married a perfect man, had a child and achieved her white picket fence fantasy but this is in the past now, for she has fallen in love with Erica, an ex-sex worker, and she will do anything to rationalise her feelings.

I wouldn’t exactly say Ben Forster appearing as himself in this musical comedy is a career highlight (he is, after all, someone who has played the … END_OF_DOCUMENT_TOKEN_TO_BE_REPLACED

It’s an intricate plot, laced with some subversive humour - that the female character is simply called ‘The Woman’ (Molly Lynch), for instance, is … END_OF_DOCUMENT_TOKEN_TO_BE_REPLACED

Andrea McArdle didn’t, when the 1978 movie Rainbow was released, look or sound like Judy Garland, and she still doesn’t. You’d be forgiven for … END_OF_DOCUMENT_TOKEN_TO_BE_REPLACED

TENNIS ELBOW is the first play that John Byrne has written for thirteen years, and is in fact a companion piece to his critically successful Writer’s … END_OF_DOCUMENT_TOKEN_TO_BE_REPLACED

It’s all a bit banal, really - or perhaps I’m too heavily influenced by some of the other online productions that I’ve seen recently, which deal with … END_OF_DOCUMENT_TOKEN_TO_BE_REPLACED