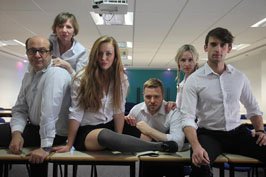 Relationships are a funny thing. That is the primary concern in Under the Blue Sky, three acts of three completely different relationships between three interconnected couples of teachers.

This production of the play chooses to begin with the popular technique of beginning the performance as the audience are seated, with the six performers sat, dressed as school-children and behaving like such. It’s a clever technique used throughout that the actors are seen to shed their ‘school-child’ and take over the teacher persona, but the motif of various school-child behaviours seep through into the performances. It seeks to highlight how the immaturity and insecurity of those early school relationships never truly vanish, as the so called ‘mature’ adults argue over petty disputes, deliver insensitive put-downs and dance awkwardly as though at a disco.

The opening act features ‘Nick’ (Alexander Piggins) and ‘Helen’ (Louise Tyler), two younger teachers teaching at a comprehensive. These two performers captured the dark humour behind the edgy subject matter well, managing to raise some decent laughs from the small crowd of fifty. The knife-edge turns of the script between comedy and tragedy were handled well, with the performers maintaining the insatiable attitudes of the characters through the quips.

The second act features ‘Graham’ (David Paisley) and stand-out performer of the night Natalie Sheriff, playing ‘Michelle’. The stark contrast of their awkward sexual encounter – including some typical student-esque mishaps – to the previous act makes you sit up and take notice, as the tales of romance and deceit begin. Sheriff handles this act exceedingly well, stumbling around in believable drunkenness with visible tears rolling down her face at the climax of her stunning twenty-minute monologue.

Thirdly come the more mature teachers, in ‘Robert’ (Tino Orsini) and ‘Anne’ (Rachel Dobell). By nature of following the previous explosively erotic duo, this section does take a step down and seems more slow-burning in comparison. It seems as though this act could do with some re-writing for today’s audience – not a fault of this production team, of course. The romantic attraction however between these characters is played as sweet and deserving, with Robert’s continuing fascination with lunch a particularly funny interjection in Anne’s deep, meaningful story. The ‘age gap’ is the adolescent problem dealt with here, which was earlier foreshadowed in Act One, and it serves as the only happy outcome of the three.

The three acts are interlinked, with clever references to the names of previous characters and contrasts in behaviour. Particularly, the playing of Nick and Helen as stately and well-spoken comprehensive teachers versus the unruly public school teachers Michelle and Graham conjured many interesting considerations. The small points added to this production. What at first seems like an ultra-low budget set is soon revealed to be purposeful, with plastic made flowers that a school-child would make, and ‘Booze’ scrawled in immature handwriting across a flask – you’re left in no doubt as to the main message here.

Under the Blue Sky is only in London for a short warm-up run, before this production team take the show for its debut at the Edinburgh Festival. If you happen to be there, there are some great moments to enjoy in this small-scale production.

Under The Blue Sky Written by: David Eldridge
One of Eldridge’s earliest plays, this will be the first professional production since the play’s storming West End run. Akin to a teachers’ La Ronde, this production deals with romantic and sexual agony among the academic classes in a wittily and circular fashion. Confronting morality in a world where there is a great expectation to be morally complete, are teachers fit to teach if they can’t teach themselves?

After sleeping together once, Nick and Helen have remained friends for three years, but tensions start to rise when Nick talks about leaving to take a new job at a public school. In the next vignette, an extremely drunken Michelle is determined to sleep with her forced confidant, the desperate and obsessive history teacher Graham. But her recount of her various sexual escapades end in tears and a disturbing role reversal. Finally, two older teachers, Robert and Anne, who have spent the school holidays together for many years, look up at the sky and begin to hope they can be happy.

In three subtly linked acts, three pairs of teachers discuss love and lust with boldness and honesty, as Eldridge studies unrequited affection, obsession, sex, and if we can learn morality.