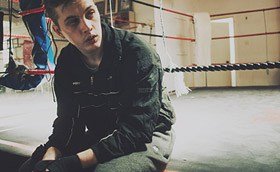 If you’d told me a few weeks ago that I’d be spending an hour listening to a man talk about boxing, I’d never have believed you. But tonight, that’s exactly what I did – and what’s more, I loved it.

Firstly, I should say that Until You Hear That Bell at Battersea Arts Centre is not just ‘a man talking’. Sean Mahoney’s a spoken word artist and former member of the Roundhouse poetry collective, who’s won Literary Death Match twice and appeared on Channel 4’s Random Acts. He’s also a former amateur boxer, and this show combines his verbal and physical talents to create a piece that’s funny, moving and inspiring. It’s a story about boxing, but it’s also about family, commitment, and choosing a path in life, which is something we can all relate to.

The show, directed by Yael Shavit, follows Sean over a decade, from his introduction to boxing by his dad as a young boy, into his teenage years, when he’s starting to get good at it, but also becoming increasingly aware of what it’s costing him. His words are set within timed boxing rounds, with a shrill whistle letting us know when it’s time to move on to a new scene. This keeps the piece moving constantly, both in and out of the ring, as we’re invited to share not only in Sean’s boxing career but in his family life and relationships too.

Until You Hear That Bell is a real testament to the power of the spoken word. Working within a bare space, and with just a few props, Sean nonetheless paints a series of pictures so vivid that the audience can see and hear it all. The cast of supporting characters come to life without ever entering the room: the coaches, Sean’s friends and fellow boxers, and – most importantly – his family, particularly his dad.

While the show deals with some serious issues, it’s also very funny. The young Sean’s amazement at seeing someone hit another man in the face; the scene with the boiling hot mouthguard (‘this is getting out of hand’); his unfortunate habit of crying all the time – each is a little gem that lifts what could have been quite a heavy piece, at just the right moment.

And, obviously, there’s the boxing. I’ll admit I’ve never been a fan of the sport; I’ve always thought of it as just a demonstration of violence and aggression. But this piece somehow makes boxing into something almost beautiful – it’s still about hitting someone in the face as hard as you can, but there’s an elegance to Sean’s descriptions that turns it into an art form. And it’s impossible not to respect the fitness required, particularly after a skipping rope scene that left the audience more breathless than the artist, and earned a spontaneous – and deserved – round of applause.

Until You Hear That Bell is not just a show for boxing fans, although it may create a few. Sean Mahoney brings his personal journey to life with skill and passion, and the result is a short but powerful piece that will resonate with anyone who’s ever worked hard in pursuit of a dream. And it invites us to consider where that hard work will lead, because it may not be where we expect.

UNTIL YOU HEAR THAT BELL
At the age of eight Sean Mahoney was gently cajoled into the boxing ring by his father. By the time he was thirteen he was hitting the gym three times a week. Fast-forward two years later and Sean was lifting his first youth titles. With Battersea Arts Centre’s support, Sean – a protégé of spoken word artist Polarbear – was able to quit his job in a pie shop to turn his attention towards developing his first solo performance. Until You Hear That Bell is timed to precision, as the metallic cry of the boxing bell unleashes three-minute spoken word torrents, moving through childhood reminiscences and rites of passage, spliced with sequences of lightening quick rope-work, jabs and mighty uppercuts.

This isn’t the first production to go down the road of referencing a one-star review of their show (from a different publication, I hasten to add). … END_OF_DOCUMENT_TOKEN_TO_BE_REPLACED

Two sisters reunite after the death of their mother, and secrets pour forth. Robert Holman’s new play gently exhibits talented classical acting in a … END_OF_DOCUMENT_TOKEN_TO_BE_REPLACED

Everyone’s vexed in this show, though some have clearer reasons to be than others. Mrs Driscoll (Tameka Mortimer) is struggling with a home life that … END_OF_DOCUMENT_TOKEN_TO_BE_REPLACED

The penultimate production of the 2021 Tête à Tête Opera Festival, based at London’s Cockpit Theatre and showcasing contemporary and avant-garde new … END_OF_DOCUMENT_TOKEN_TO_BE_REPLACED

Relatively Speaking premiered in 1967 and is the sort of show that is, by contemporary standards, very much of its time, and not just because of … END_OF_DOCUMENT_TOKEN_TO_BE_REPLACED