Home » Reviews » Review of West of Frances at Edinburgh Fringe 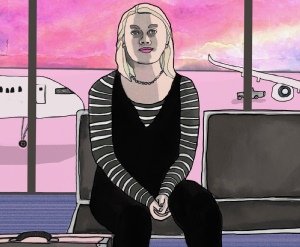 Frances Shea (Ella Blackburn) is off to spit on a nun’s grave, flying out from London to Dublin to do so. This isn’t an anti-religious play (though technically it’s an unreligious one), and in the course of West of Frances’ narrative, it becomes clear that Frances’ late grandmother, of the same name, used to keep a record of people who had crossed her, and would then patiently wait for news of their passing in order to have a private celebration and then, if possible, find their burial plot and spit on it.

It’s a bizarre eccentricity (even by Edinburgh Fringe standards, where quite literally almost anything goes), and one that by definition couldn’t last forever – at some point (at the risk of stating the obvious) people who wound up the older Frances would generally be substantially younger than her, making the prospect of her seeing their gravestones to pay her disrespects increasingly unlikely. But if her daughter wasn’t interested in holding grudges, or at least not in this manner, then her granddaughter is, and this isn’t the first time she’s packed her bags in a bid to finish what the other Frances began.

That isn’t all the play is about, thank goodness. In a cool and measured delivery, Frances provides details of her family life, her degree in ‘journalism, new media and modern communications’, and her job as the obituaries editor for a newspaper. There are more characters, such as school mates and acquaintances, and a rather clueless (as in impractical) academic tutor. Despite the generation gap, there are commonalities between Frances and Frances. Some of the one-liners are rather unrepeatable, particularly as they really must be understood in context, and in the end, this is a sincere, warm and witty play.

Frances has decided to fly to Dublin to spit on Sister Ina Marsh’s grave. It’s an act of revenge long overdue. Ina Marsh, after all, is the woman who left Frances’ then-teenage grandmother without so much as a friend in Jesus. Frances’ grandmother has curious and inconvenient ways of making her presence felt. This darkly humorous piece tracks one woman’s saliva-fuelled odyssey to rectify the wrongs of history, whilst bringing both Franceses, young and old, to life. It’s a work which explores family, thwarted journeys, and whether doing the right thing is ever as right as intended.

As if there weren’t already enough drama in his life, off the field and on, an intriguing stage play tackles, firmly but fairly, a lost weekend at the … END_OF_DOCUMENT_TOKEN_TO_BE_REPLACED

Earlier this year, drag herstory was made when for the first time, one of the queens in the Drag Race UK “Lip Synch for Your Life” portion of the … END_OF_DOCUMENT_TOKEN_TO_BE_REPLACED

I could wax lyrical about the plausibility of a scenario like that of The Interview taking place in this day and age. We’re not told exactly when the … END_OF_DOCUMENT_TOKEN_TO_BE_REPLACED

It’s convoluted, and not just because there’s a play within the play. Clare (Kate O’Flynn) and Felice (Zubin Varla) are siblings and are actors on … END_OF_DOCUMENT_TOKEN_TO_BE_REPLACED

In a rigorous debate about everything and nothing, For (Hassan Govia) and Against (Jess Pentney) are at least willing to continue discussions with one … END_OF_DOCUMENT_TOKEN_TO_BE_REPLACED