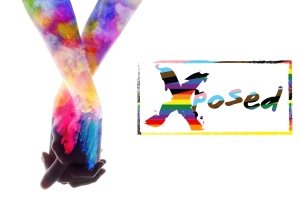 June is world-wide Pride Month and here in London, we end the month with the start of London Pride week, which culminates in the annual Pride in London parade. This year, my London Pride week started with a visit to the Southwark Playhouse where Full Disclosure Theatre were putting on a new writing night of eight short plays revealing the naked and entertaining truths about LGBT+ life.

The evening started off with Converting The Preached To by Niall Urquhart, directed by Louis Catliff. As we took our seats we were welcomed by our Preacher (Linus Karp) who shook hands and said hello to as many as possible. He then proceeded to introduce us to Robert (Ikky Elyas), a new member of our gay conversion therapy group who started to explain his reasons for joining much to the consternation of the Preacher and apparent delight of Dennis (Pedro de Senna) a normally quiet member of the group who blossoms under Robert’s influence.

Converting The Preached To was a powerful start to the evening, taking the idea of gay conversion therapy and turning it completely on its head to great comedic effect. The story starts with a powerful twist and thanks to the writing and splendid acting, builds to an impressive ending that could potentially have seen a large proportion of the audience heading to the pub.

A nicely written piece, very well performed by Chloe. On the whole, it worked well though due to the limits of time, I found it difficult to fully understand the motivation behind the student’s action. Still, it made me think about how often being desired sexually can make someone feel that they are worthy.

Play No 3 was The Department of Interpersonal Relations by Ivo de Jager, Directed by Saffia Kavaz. Today is when Amber (Mia Georgis) finds out the most important thing in her life – her sexual orientation. Following a series of tests and the government representative (Oliver O’Donohoe) confirms that Amber is bisexual with more of a leaning towards women. This comes as a shock to her as she has always believed she was straight, but the computers don’t make mistakes so she is sent to live with Deliah (Chantelle Levene) for a relationship trial.

This was an interesting play that, to my mind, needed longer than the time available to tell its tale. Like all of these works, The Department of Interpersonal Relations is a work in progress and, while I understood what the playwright was trying to do, it felt that this was just the germ of an idea that would given some time flower into something much bigger. I did love the basic premise of a government computer scheme which decided on sexual orientation but, for me this raised more questions than it was able to answer.

Ending the first half was Time and a Place by Nikki Hill, Directed by Sam Luffman. This is the story of a lesbian couple (Laura Hyde and Maryam Grace) doing a regular shop in Wilko’s. As they ponder whether to buy bin bags or not, one comes out with a statement that throws the rest of their shopping trip in total disarray.

I loved this piece. The writing accurately picked out the British habit of starting a conversation about one thing when you really want to discuss something else. And the fact it happened during a shopping trip made it even better. I’m not fully up on everything that lesbians do – for example, I found that LBD doesn’t mean little black dress but does, in fact, mean Lesbian Bed Death – but I did find these two characters totally relatable and just lovely. I have two minor gripes about the play. First, and it may be that I missed it, was their lack of names and second, I can never see Wilko in the same light again.

After the interval, we were back with Asking For a Friend by Rhys Bevan, directed by Chris Davis. Sam (Devan Madha) and Al (Drew Dillon) are about to ask their friend Lynne (Rachel Hilton) for a favour. The two boys want to have a baby and would like to be the surrogate mother. She is up for it and as the three of them celebrate over a glass of prosecco, they start to make their plans.

Rhys Bevan has really penned a strong piece with Asking For a Friend. The writing is brilliant and totally plays with the audience’s emotions. There was literally a moment during the play when the entire audience went from uproarious laughter to a collective gasp and a silence where the ‘proverbial ‘pin dropping’ would have sounded like Big Ben at full blast. The cast were brilliant with each other and had a sense of comic timing, particularly Rachel, that cannot be taught.

Where’s Cecily? by Nicole Latchana, directed by Sita Thomas was a serious play about Miles (Remus Books) a trans man about to go in for surgery, supported by his partner (Georgia Lindsay). Miles is very excited but his partner is not so sure. She remembers the days when Miles was Cecily with whom she had a loving relationship.

This was quite a dark play which seemed to meander a bit in its writing. Quite early on, I found I wasn’t really warming to Miles and I did end up not liking him much at all. It felt, that in transitioning, Miles had tried too hard to prove he was a man and, in consequence, picking the worst aspects of the gender. I could understand some of that but, I did wonder if the personality of Cecily could be so suppressed by Miles to the point where his girlfriend didn’t really know him anymore. I was intrigued by the, for me too brief, foray into how transitioning affects a partner and felt that this aspect could have been explored a bit more. Overall, and possibly because it is something I have no real experience of, this one didn’t work for me that well.

The penultimate show was Vanilla by James Woodall, directed by Aran Cherkez. This is the story of Ben (James Killeen), a young Yorkshireman about to set off to start university in London. Ben is excited, not only about leaving his home town and his parents (Adrianne Carless & Dan Overton) but, more importantly, about moving to a city where nobody knows him and where he proudly tells the world that he is gay and then embarks on the journey of being a teetotal gay nerd looking for romance and adventure

I absolutely adored Vanilla. This was a short story where everything was right. James had a lovely wide-eyed innocence and excitement about him all the way through as Ben left the safety of a Yorkshire village for the lights of London, and both Adrianne & Dan proved how versatile they are as actors playing the wide range of people that Ben met on his journey. To top it all, James Woodall penned a piece that was highly relatable – the adverts and conversations on the various dating and hook-up sites Ben used drew many a knowing laugh from the audience, and ultimately Ben was a character you cared about and wanted the best for.

Ending the night was Date Night by Thomas Smith, directed by Ruth Endersby, This is the story of two ladies in their forties who meet outside a pub which is holding a lesbian speed dating night. The two are very different. Jackie (Srabani Sen) is nervous. She has only recently partially come out – she can’t yet utter the ‘L’ word as once she does there’s no going back. Jackie is confused about the rules of being an out gay person and has only come along because her daughter has forced her to. Dianne (Jacqueline Johnson) on the other hand is an out and proud member of the sisterhood and knows everything about being a successful lesbian. As they meet in the beer garden, they talk of why they are there and what they hope for the night.

I started off thinking that nothing was going to top Vanilla for me. Boy, was I wrong. Date Night was an absolute revelation. This gentle tale of two ladies of a certain age really worked for me. Part of it was the fact that I came out later in life, in fact around the same time as Jackie, and was initially totally overwhelmed by what it meant to be a member of the LGBT+ community – despite what you hear and read, there is no gay agenda or manual to read. So I easily identified with Jackie. To some extent, the same was true with Dianne. Like everyone else, I know how lesbians look and act, be they femme, butch, etc. Of course, I don’t and the realisation that Dianne goes through that being a Lesbian is part of who she is not the entirety of it, was lovely to see and experience, thanks to the superb writing and the wonderful talents of the two actors.

At the end of the XPOSED, I reflected that once again, Full Disclosure have presented an amazing night of LGBT+ theatre that was not only an awesome way to start of Pride Week, but proved that there is a wealth of writing, directing and acting talent out there ready for the next generation of the LGBT+ and heterosexual theatre going communities.

The Department of Interpersonal Relations by Ivo de Jager
Directed by Saffia Kavaz
Amber thought she was straight – until the government said otherwise.

Time and a Place by Nikki Hill
Directed by Sam Luffman
If only buying sperm was as easy as buying groceries.

Asking For a Friend by Rhys Bevan
Directed by Chris Davis
They say you don’t get to choose your family. Or do you?

Where’s Cecily? by Nicole Latchana
Directed by Sita Thomas
When transitioning means losing the one you love

Vanilla by James Woodall
Directed by Aran Cherkez
Coming out doesn’t always mean you fit in.

The thing about Panto is not to over-think it. It’s about having fun and surrendering to the Christmas spirit. Like Christmas crackers, there is a … END_OF_DOCUMENT_TOKEN_TO_BE_REPLACED

Anyone who's worked in investment banking knows it's largely an intellectually-free zone, polluted with people who calculate each other's value … END_OF_DOCUMENT_TOKEN_TO_BE_REPLACED

By the production’s own admission, the version of events as detailed in Bonny & Read is unlikely to equate to an exactly full and fair account of … END_OF_DOCUMENT_TOKEN_TO_BE_REPLACED

This early Rattigan play has had an interesting life. Set in the Second World War and premiered while that conflict still raged, it has since found … END_OF_DOCUMENT_TOKEN_TO_BE_REPLACED