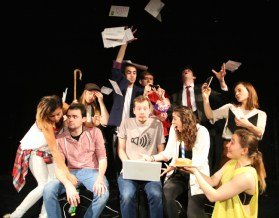 What would it be like if you could have a conversation with the social media you use every day? What if Facebook threw you a party, Snapchat burst into the room to give you a hug and run away, and Farmville popped round to give you grief about your dying crop? The answer to this and many more questions you never knew you had is explored in You Tweet My Face Space.

David is in trouble with his girlfriend Charlotte after a picture of a girl kissing him appears on Instagram and Facebook. After being dumped in a hashtag manner, David attempts to get some work done, only to be interrupted by the personifications of Facebook, Instagram, YouTube, Farmville, Snapchat and Hotmail, all desperate for his attention. Chaos and hilarity ensues as Facebook tries to thrown David a party to cheer him up, in honour of his flatmate Matt’s birthday. Poor Matt, he’s a sweet character who should be treated a lot nicer by David on his birthday.

The jokes are many and quick, and the characters are stood next to the wall, connected to network cables with obvious connotations to addiction, or sat in the audience taking selfies They are of course all on their phones, only coming to life when they hear an alert noise or if they’re mentioned specifically. I was sat next to the adorable Tinder and leaned in to a selfie of my own. Let me tell you, Tinder smells good. Not at all like late night drunken desperation, which is what you’d expect.

The cast does a tremendous job with the material, they are funny and likeable, and there isn’t a low point amongst them. The standout performance is Evan Rees as Facebook, who you kind of hate, but still like him. He has great comedic timing and a charisma that won’t let you stop looking at him. I hope we get to see him do more villains in the future.

An otherwise delightful and hilarious play is thoroughly torpedoed by a very unnecessary joke Tinder makes about how David doesn’t want to date any trans person that hasn’t completed gender reassignment surgery. Good comedy always kicks up, and this joke completely misses the mark. Trans people are so often made the butt of jokes, and it’s not funny. We know better than to make jokes about the mentally disabled, it’s time to put trans jokes in the past as well. Being transgendered is challenging enough and they are the targets of not only jokes, but actual harm. The writers should know better, as should the audience.

With this dated attempt of comedy, I’m reminded that some of the technology in the play is becoming dated as well. Farmville is a delightful character that I can’t imagine the play without, but Farmville has since been replaced by Farmville 2, which has about 10% of the players of Candy Crush. Farmville has already become a memory to most facebook users now that we aren’t hounded by the wall posts. Farmville is now so desperate for attention that the company has created its own Match 3 game called Farmville: Harvest Swap.

All in all I really liked You Tweet My Face Space, it’s a clever idea and a good commentary on how obsessed we get by social media. But I can’t look past the offensive trans joke, which ruins an otherwise lovely play. A rewrite and making the material a bit more current could easily get this play to a 5 star belly laugh of a night. But it wasn’t this night.

You Tweet My Face Space was first performed at last year’s Camden Fringe Festival and then to a sell-out audience in the West End at Christmas. Writer/producer Tom Hartwell graduated from Mountview Academy of Theatre Arts with a BA (Hons) in Acting in 2015. For the last 3 years Tom has been developing the script after a short 15 minute extract was performed at the Old Red Lion in response to Andrew Maddock’s The Me Plays back in Sept 2014.

It is 2002 – another Royal Jubilee year, and HRH (Mary Roscoe) is due to open a new Science wing in a 'sink' comprehensive where Dr Derek Jones … END_OF_DOCUMENT_TOKEN_TO_BE_REPLACED

Dr Anna LaRosa (Dr Stefania Licari) has a lot to say. Just as well, as she’s the only one on stage in this medical comedy, which largely draws its … END_OF_DOCUMENT_TOKEN_TO_BE_REPLACED

Nikhil Parmar’s one-man show, originally written as a TV pilot, manages to touch on a wide range of themes from Islamophobia to modern fatherhood with … END_OF_DOCUMENT_TOKEN_TO_BE_REPLACED

Handel’s 1738 opera Serse (or Xerxes) is an exploration of power, love and human frailty. King Serse falls in love with the voice of his brother … END_OF_DOCUMENT_TOKEN_TO_BE_REPLACED

Lea Salonga has her fans. She also has some superfans, the ones who yell, “I love you Lea!” at almost every opportunity. If that wasn’t enough, there … END_OF_DOCUMENT_TOKEN_TO_BE_REPLACED