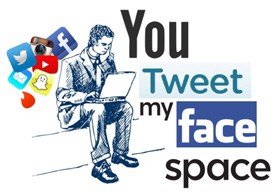 I’m an internet addict. I’ve said for years that if I could connect to the internet by being hooked up through my veins, I would. Imagine my surprise and delight when I found myself faced with a cast of characters who are attached to the internet through a LAN cable fastened with a band on their arm, as if in some weird sci-fi future – without the weird costumes or aliens. Instead, they’re all on their phones. And so here we are, with You Tweet My Face Space.

It’s a fairly simple story really – David has been caught on camera being kissed by another woman, and is dumped by his girlfriend Charlotte, a twitter addict, in a series of hashtags. As he tries to win her back, his efforts are somewhat hindered by the various social medias personified, starting with the kisser, who turns out to be Instagram. Hilarity ensues.

And it is absolutely hilarious. Between Snapchat dashing in and back out again, Farmville being distraught about the abandoned farm and Facebook rather aggressively trying to not get deleted, it’s a show full of laughs.

Some jokes are a bit obvious – like Tinder being a sexy woman and a Scarlett Johansson profile obviously being fake – but generally, the play does a really good job of kicking each service where it hurts. Facebook in particular is portrayed as a bit evil, who mistreats the services he’s acquired, Youtube is overly enthusiastic and films everything (there’s a great buffering joke at one point), Instagram has a photo album and takes selfies with everything including the pot noodles, and everyone comes down on David as he decides he wants to get rid of the lot of them. Because Facebook has set up a party to try to cheer David up after being dumped, every service appears one at a time, and it’s the weirdest party ever. At one point Tinder tries to stop David by swiping left directly on him.

I don’t agree with the play’s conclusion that the best thing to do is to disconnect from all social media, though. While it’s absolutely true that they steal time and in a way disconnect us from each other while being overwhelmed with each other, social media also connects people in meaningful ways and can be a force for good. It can surely lead to a lot of problems as well, but is logging off the answer? Considering you probably came to this review from Facebook or Twitter, my bias is clear, but rejecting technology doesn’t seem realistic to me. But that’s a discussion for another time and another forum.

The cast of recent Mountview BA Acting graduates is delightful. They’re all brilliant, although I have to single out Evan Rees as Facebook, with great comedic timing and the impressive ability to get through the end of the play with cake all over his face, not even wiping his face off for the bows. That’s commitment for you!

Synopsis:
You Tweet My Face Space is a new satirical comedy that captures the modern day obsession with social media and the consequences that come when your entire life is in the public domain.
Set in a typical London flat, Dave’s relationship with Charlotte Comes crashing down when a controversial photo of him appears online.  Facebook, Instagram, YouTube and others show up one after another in
attempt to help remedy the situation but ultimately end up making things worse. Caught in the middle of this fray, Dave must overcome his fears of committing to something real and face the power of procrastination.

About:
A short 15 minute extract was performed at The Old Red Lion Theatre last September as part of a writers response night to The Me Plays by Andrew Maddock and was met with overwhelming praise. Over the last two years the script has evolved from a short comedy sketch into a deeper and far more ambitious 1 act play.

The ambition is not only to entertain but also invite audiences to really think about the role that social media plays in their lives. Influences of our newly connected works are becoming more prevalent in across all artistic platforms because the material is so relatable; everyone and their gran are now on Facebook.

Well, there’s a bit about Pablo Picasso’s (1881-1973) paintings in this show that bears his name. But it’s mostly about his approach towards women. … END_OF_DOCUMENT_TOKEN_TO_BE_REPLACED

It’s thirty-six years or so since Robert Harling wrote Steel Magnolias as a tribute to his diabetic sister, his mother and the group of local women … END_OF_DOCUMENT_TOKEN_TO_BE_REPLACED

Like War Horse and The Curious Incident of the Dog in the Night-Time before it, this National Theatre production centres its storyline on a boy who … END_OF_DOCUMENT_TOKEN_TO_BE_REPLACED

Did you know, The line "Nobody puts Baby in a corner." was voted as the #98 all-time favourite movie quote by the American Film Institute. I only … END_OF_DOCUMENT_TOKEN_TO_BE_REPLACED