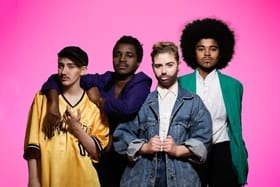 The Eighties were a magical decade. A decade that started with the Cold War at its height and ended with the fall of the Berlin Wall, taking in the Falklands conflict, the AIDS epidemic, an actor in the White House and Section 28 along the way cannot ever be accused of being dull, can it? Musically, we had the new romantics, synth pop and the start of House music to name but three genres prevalent in the eighties. All this nostalgia must be leading somewhere you are no doubt thinking and in fact, it does. It leads straight to the cabaret bar of the Soho Theatre where the Pecs Drag Kings are in residence giving their own slant on the decade.

Pecs Drag Kings is a roughly eighty-minute long cabaret show hosted by the very talented Cesar Jently (Kit Griffiths) that is a real celebration of some of the queer icons of the 80s. The show starts with a wonderful Queen medley and finishes with Prince and in between pays tribute to many others including David Bowie and George Michael. The performers – Drag King Cole (Temi Wilkie), Mr Goldenballs (HelenaFallstrom), Izzy Aman (Isabel Adomakah-Young), John Travulva (Jodie Mitchell), Loose Willis (Katy Bulmer), Scott Free (Rosie Skan), Thrustin Limbersnake Lauren Steele) and Victor Victorious (Victoria Aubrey) – sing, dance, do stand up and even sweep the stage with real skill.

I don’t want to give too much away in the way of spoilers about Pecs Drag Kings, so not go into too much detail of individual acts in my description below. There is amazing music, dance, stand-up comedy and political discourse – as well as some interesting, and rather worrying, comparisons between that decade and the age in which we live. Joint directors Celine Lowenthal and Temi Wilkey have really done their research. All of the tribute acts are really authentic in look, style and movement. My personal favourite was the boy band who, like the originals were fantastically choreographed with some of the cheesiest moves its possible to see on a stage.

At the back of the show, there was, for me an interesting point of seeing the world from a woman’s perspective. Male pop stars were not just cheesy in those days but, were actually quite obscene – the amount of crotch grabbing and thrusting going on was really excessive but actually fairly tame when compared to the ‘real’ performers of the time. Something I had never realised before but seeing women, dressed as men doing it really brought the idea home to me.

As well as the music, the eighties was a fascinating time politically. For me, there was slightly too much politics, Also, as someone who was around during the decade under discussion, I feel it is a bit too easy to score political points by reducing events to a series of soundbites. To be honest, though, I really wanted lots more music. However, over the course of the production, the madness of the political situation contrasting with the hedonism of the music made for a thought-provoking show.

Having spent a good many years watching drag queens go about their business, I did go into the theatre thinking I had a pretty good idea what I was going to see. However, I was really surprised by the professionalism and talent of the Pecs Drag Kings. Yes, not all of it was right for me, but the awesome easily outdid the iffy and I The show is a must-see for anyone that likes a bit of nostalgia, great entertainment and the best decade of music in the history of the world. A fantastic show, brilliantly performed and if you don’t walk back out into Soho with a smile on your face, a song on your lips and some quite intense thoughts in your mind, I will be really surprised.

Pecs Drag Kings return with the hotly anticipated encore of their sell-out, smash hit production of Pecs: The 80s Show. This cabaret extravaganza is transferring from East End LGBT super-pub The Glory to Soho Theatre for a week’s run from 4th to 9th December.

The 80s Show was written as a direct response to the political events of 2016, drawing parallels between the conservatism then and the encroaching rise of fascism that we faced at the beginning of last year. The 80s gave rise to a wealth of activist movements and, in this show, Pecs draw upon these movements to inspire audiences and call them to action.

The show pays tribute to the many queer icons lost in 2016 including; David Bowie, George Michael and Prince. The show is the fitting political platform to pay tribute to performers loved and lost in 2016, reflecting on the legacy and impact they had upon queer culture.

EverAfter, A mixed up fairy tale at the Chickenshed Theatre, is a great Christmas show. As the title suggests, this is a concoction of stories. The … END_OF_DOCUMENT_TOKEN_TO_BE_REPLACED

The thing about Panto is not to over-think it. It’s about having fun and surrendering to the Christmas spirit. Like Christmas crackers, there is a … END_OF_DOCUMENT_TOKEN_TO_BE_REPLACED

Anyone who's worked in investment banking knows it's largely an intellectually-free zone, polluted with people who calculate each other's value … END_OF_DOCUMENT_TOKEN_TO_BE_REPLACED

By the production’s own admission, the version of events as detailed in Bonny & Read is unlikely to equate to an exactly full and fair account of … END_OF_DOCUMENT_TOKEN_TO_BE_REPLACED