Home » Reviews » Review: Play Something at the Drayton Arms Theatre 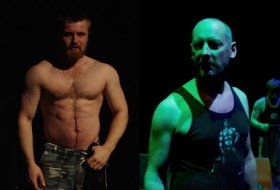 We all have songs that remind us of loved ones and lost ones, special occasions and sad – the right piece of music can trigger the deepest of memories and emotions. So it is a notion rich in potential to be explored in a theatrical context and that is exactly what Paul T Davies has done with his play Play Something, receiving a short run here at the Drayton Arms Theatre in West London.

The first half of the play is constructed as something of a memory play. Older versions of the two characters watch on as their younger selves act out key scenes from their relationship and since music unlocks so much of that sensory memory, they intermittently call out to the onstage DJ ‘play the one to make love to’, ‘play the one for a celebration’, ‘play the Forever Song’…

So club music is thumping away when our two protagonists hook up at a gay club, Kylie’s ‘Confide in Me’ is the weapon of choice to provide a seductive atmosphere of role reversal, Donna Summer’s ‘I Feel Love’ soundtracks a key reunion. It is structurally intriguing and as a way of hooking us into the story of two men at different places in accepting their sexuality, at cross purposes in trying to define their relationship, it is one which shows much potential, particularly in the interplay between old and young when it comes to the more emotionally difficult parts of the story.

As the story then tips forward a few decades, it doesn’t quite maintain the same energy. It becomes a more straightforward love story and in its headlong rush to cover the full span of the marriage that emerges, it skates over some of the more interesting facets of their relationship. The emotional impact of coming out later in life, working through internalised homophobia, the social pressures to replicate heteronormative models of coupledom. Instead, we’re left with improbable leaps (poor abandoned fiancé!) and unnecessarily long pyjama parties.

Jacko Pook and Ben Maytham strike up an interesting chemistry as the younger pair, navigating open relationships and conflicting feelings with real vigour. And as the more empathetically aligned older coupling, Matt Bradbury and Shane Whitworth have a more tender, subtler connection. But having set up a promisingly bold beginning, Davies loses some of the courage of his convictions and ultimately Play Something becomes something more conventional.

Following a highly successful run at the Edinburgh Fringe Festival 2017, Stage Write present their acclaimed LGBT show about love, sex and music- the songs of our lives.

“Side One, track two. That song is about me.”
From beginning to end, M and F tell you the story of their love, and ask the DJ to Play Something.

Something to make love to, to split up to, to celebrate, to cry, and to play the Forever Song. They are the songs of all of us. Covering decades, younger become older and the play becomes the story of everyone who has loved, lost, and loved again, and had Our Song.

Catch Me is a new musical written by Arnoud Breitbarth and Christian Czornyi and directed by Adam Lenson, that debuted in 2016 at the Arts Theatre in … END_OF_DOCUMENT_TOKEN_TO_BE_REPLACED

There are usually, broadly speaking, two large demographics of patrons at a family show like The Wizard of Oz – children and their responsible … END_OF_DOCUMENT_TOKEN_TO_BE_REPLACED

This production makes excellent use of the available stage space - and, rather like the big musicals at Chichester Festival Theatre, has its cast … END_OF_DOCUMENT_TOKEN_TO_BE_REPLACED

This is an enjoyable and dynamic production of Henry V at the Sam Wanamaker Playhouse. Does it matter that there is innovative action and that it is … END_OF_DOCUMENT_TOKEN_TO_BE_REPLACED