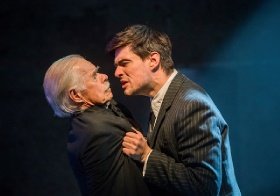 Albert Camus’ most enduring novel, L’Étranger, is now enjoying its first major theatrical production in the UK. For those who are unfamiliar with the story, its central character, a French Algerian, buries his mother and a few days later kills an Arab whose sister has been brutalised by his friend. He is put on trial for the Arab’s murder and condemned to death.

Poet, playwright Ben Okri and director Abbey Wright have taken up the challenge of adapting Camus’ 1942 novel for the stage under its English title, The Outsider. And it certainly is a challenge because The Outsider carries with it decades of fixed ideas about existentialism and the absurdity of the human condition. So, does adapting it for the stage offer a fresh perspective on how we might interpret this classic work? It definitely does but it is one that requires an intense engagement.

In the first instance, The Outsider does not lend itself easily to dramatic interpretation, most markedly for its protagonist, Meursault (Sam Frenchum), a figure who moves through his own life from a seemingly emotionless position. Meursault also acts as narrator of the piece, in a sense a dual function that limits an actor’s scope for character development. Frenchum handles this with seamless skill but it is only at the very end, in a violent outburst with a chaplain (John Atterbury), that he is free to unleash the passionate truth of his character. In contrast, Meursault’s friend Raymond (Sam Alexander), is allowed a delicious range of emotions as an engaging rogue and violent abuser of women. And here is where Camus might be expressing a sentiment about the price men of conscience must pay for failing their women.

The three women we learn about in the play are Meursault’s mother, who has imbued Meursault with potent memories of his father and with her own philosophy of life. Meursault’s devoted girlfriend, Marie (Vera Chok), with whom he enjoys sex and refers often to the delights of her body, and The Arab’s sister, who is beaten and abused by Raymond.

At the point of encounter between Meursault and The Arab there is a sense that both men have failed the women they were meant to cherish; Meursault by placing his mother in a nursing home; The Arab by failing to protect his sister against Raymond’s fists. It is not society that has condemned Meursault to death, nor a reckless killing that has snuffed out the life of The Arab. It is that in the thundering silence between the two men, lies the accusation/proclamation that each recognises the other’s guilt, each is the other’s executioner. This sense of an ‘unspeakable’ unexplored intention, is enhanced by a backdrop that evokes the brutality of a North African sun and a spiritually barren world, evoked by crumbling stone and sparse design (Richard Hudson). The duality between Meursault and The Arab is a layer of this classic work that deserves more attention.

There has also been some concern expressed about the murdered Arab neither having a name nor a voice in the play – a man condemned without the privilege of telling his side of the story. It is a characteristic that Meursault shares with him. Meursault is also denied a voice when at his trial, he is not allowed to speak for himself.

Okri has tried to rectify The Arab’s mute portrayal by writing dialogue for The Insider, a short film by Mitra Tabrizian, in which The Arab tells us something about his life and his sense of guilt in not protecting his sister. It is screened from 18.15 each evening at The Print Room and also during the play’s interval. Albeit if it soothes those who wish to overwrite works of literary art with a moral compass, or to limit creativity to standards of political correctness.

But perhaps it is not that the Arab doesn’t speak, but that he speaks too loudly. And this is where I sense that Camus is saying to us, “I am not going to hand you anything here, you are going to have to work for it.”

The Outsider (L’Étranger): at the Print Room from 14 September to 20 October 2018. For further
information or to book or visit the website: www.the-print-room.org/

A faceless man who can no longer pretend, Mersault commits a senseless murder under the glare of the Algerian sun and is forced to confront the hypocrisy and injustice of society. In an age where we are being increasingly told what to feel, The Outsider is a blast of uncompromising honesty.

“The Outsider, with its distilled narrative, is the perfect work to adapt for the stage. It needs to be performed in the right venue, somewhere unpretentious and true to itself. Print Room at the Coronet, authentic in its richness, is matched with an artistic programme that is distinguished, international and brave – hallmarks of great Camus principles.” Ben Okri

It is the duty of every citizen to answer the call to support and protect the United Kingdom and its allies so last night, while the rest of the … END_OF_DOCUMENT_TOKEN_TO_BE_REPLACED

Harold Pinter only ever wrote one novel. And, let's be honest, he didn’t rush into this literary endeavour. He started it in 1950 and the book was … END_OF_DOCUMENT_TOKEN_TO_BE_REPLACED

How far would you go for the people you love? What lies would you tell? What sacrifices would you make? That’s the question at the heart of The … END_OF_DOCUMENT_TOKEN_TO_BE_REPLACED

“All political lives, unless they are cut off in midstream at a happy juncture, end in failure, because that is the nature of politics and of human … END_OF_DOCUMENT_TOKEN_TO_BE_REPLACED