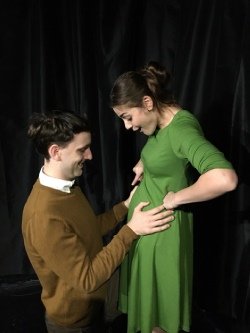 Philip Ridley’s stage plays are so often described in such terms as other and alien that you might think he holds real estate in the city of Dystopia. As the author of such popular, challenging work as The Pitchfork Disney and The Fastest Clock in the University, he certainly knows how to feed the plain materials of daily life through a richly distorting lens.

This he does with a great, poetic adeptness in Radiant Vermin. As the title might imply, this is a darkly luminous piece. Its subject, or at least its starting point, is the unremitting housing crisis and the distortions which it, in turn, visits on social behaviour. The principal at the core of the rather Swiftian satire is that it costs blood to clamber onto the housing ladder. The blood is that of others who are less
fortunate. They literally die that you might live in the home of your dreams. The links between the deaths of the neighourhood’s downtrodden and the acquisition of a bright new kitchen by an expectant and desensitised young couple are explicit and remorseless. The result is a comedy that keeps defying you to question its apparently far-fetched premise.

Jill and Ollie, the couple whose mobility we watch, are played in this Ram Jam Company by Joy Bowers and James Dart like “normal” citizens who have been recruited into a toxic, violent cabaret of class division and wilful misunderstanding. Their climb to the giddy heights of property ownership is abetted by the weirdly omnipotent figure of Miss Dee (Jennifer Oliver), who smoothes the awful road of surveys, offers, gazumping, mortgage etc into a velvet carpet of entitlement. Ownership as theft? The text stops short of such Marxism, but Uncle Karl’s long shadow surely looms over this cheek/jowl landscape of homes and homelessness.

Some observers of the play’s previous productions have complained that the thing tips over into an anarchic kind of self-indulgence towards the end as the two main players enact an entire neighbourhood party in all its awful posturings and condescensions.

True, Ridley has by this time slackened his focus on the sanctioned criminality of the market, but in the hands of these two exceptionally gifted and versatile young actors, well drilled by director Erica Miller, the scene manages to go off like an exploding refuse bin full of bright detritus.

There is also an impressive contribution from relative newcomer Giften Blue Etienne as the damaged and deeply needful migrant who arrives in the couple’s lives bearing a difficult burden of appeal and menace. If you want to savour the extra irony of such a show in such a place, there it is. For the theatre is the well-refurbished space behind the pub and restaurant of The Grey Horse in Kingston. Needless to say, there are rough sleepers under the railway bridge a few yards down the road.

Up and coming Director, Erica Miller, brings her new version of this vulgar and delightful play to a new audience in the setting of the historic Ram Jam Records, a venue with a history spanning back more than 70 years.

Ridley’s dark vision of the housing crisis distilled in 2015 has definitely aged well and promises to amuse and horrify an audience with its bare-it-all ugly truths. Expect sweat, uncomfortable laughter and to come into close proximity with weird and wonderful characters, who may not be so dissimilar to your neighbours.