Home » Reviews » Review of Richard III at the Cockpit Theatre 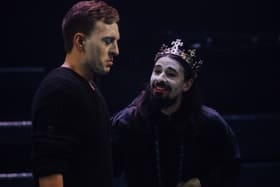 As Napoleon once said, “Great ambition is the passion of a great character. Those endowed with it may perform very good or very bad acts. All depends on the principles which direct them.” And nowhere is the idea of ambition explored in greater style than in William Shakespeare’s Richard III. This tragic story can be seen in a new production by Front Foot Theatre at the Cockpit Theatre.

Richard, Duke of Gloucester (Km Hardy) has a simple wish. He wants to be King of England. The problem is that between Richard and the throne is his brother George, Duke of Clarence (Thomas Walker Barron), the current king, and another brother, Edward IV (Oliver Hewett) and his two sons, the Prince of Wales and Duke of York. However, Richard is not going to let a minor thing like this stop him achieving his ambition and, he quickly puts his Machiavellian brain to work on the problem. Clarence is soon dispatched and Richard, while appearing to support Edward’s wife Queen Elizabeth (Helen Rose Hampton), manages to spread disharmony and discord throughout the court. Richard’s greatest ally is his cousin, the Duke of Buckingham (Guy Faith) and following the death of the King, the two of them turn on the Queen and her supporters. Richard, in his role of Lord Protector, has the heir to the throne and his brother, the Duke of York, brought to the Tower of London and there hidden from their mother and Grandmother the Duchess of York (Fiona Tong). But has Richard overstretched himself? As his friends, except the loyal Sir William Catesby (Liam Murray Scott), turn against him and Henry of Richmond (Simon Rodda) arrives in Britain determined to win the crown for the House of York, Richard’s reign may be shorter than he hoped.

Richard III is a fascinating play which, despite being written in 1592 (approximately) is still amazingly relevant to the political machinations that occur in most countries – be they democratic or not – as the elite try to gain power. Historically, it may not be very accurate, but that is a product of the times in which it was written and the need to add theatrical flair, but it is still, as they say, a rattling good yarn and this production is first-rate. Starting with the battle of Tewkesbury, Director Lawrence Carmichael kicks the production off with a bang and doesn’t let the action slow down at any point. Even though the show is nearly three hours, with an interval, the time sped by and I never found my attention wandering at any point.

Part of the reason for this was the acting. To ensure Richard III really works, the actor playing the doomed Gloucester has to be absolutely first rate. He soliloquises to the audience a lot and somehow has to get them liking him enough to sort of overlook the vile person he is and the nasty things he does. Physically, the actor has to be able to wither down to hunchbacked figure with a withered arm who must dominate a stage full of tall, straight standing people Looking fit and lean and ready to do battle. So, casting Richard is no easy feat and Kim Hardy really is perfect in the role. Determined when talking to the audience, obsequious when he needs to be. Kim is the Richard III that Shakespeare would have cast. With his flowing locks and black beard, even when sat on his throne, he exudes energy and drive, and as the story unfolds, you can see his mind constantly working on ways he can manipulate the latest move to his own advantage.

As a solo character, Kim’s Richard is superb, but when paired with Guy Faith as the Duke of Buckingham, the two make a real force to be reckoned with. I loved their relationship as they plotted and schemed their way to the crown. However, my favourite moment was when they were sat on a couch with the head of Lord Hastings (Matt Hastings) on the coffee table, at which point they just looked like two naughty schoolboys who had, quite unexpectedly, got away with a prank. Whilst I’ve singled out Kim and Guy, this is a really strong cast with no weak performances at all.

Overall, I was highly impressed by this version of Richard III. It has everything you could wish from a Shakespearean tragedy and is an absolutely superb production that took three fantastic hours of my life and gave me a yardstick against which all other Richard’s will be measured.

“From forth the kennell of thy wombe hath crept
A Hell-hound that doth hunt us all to death”
The timeless and universal story of the rise and fall of a dictator. At its centre, a twisted antagonist Richard enlists the audience as his co-conspirators and encourages them to witness his devious plots in becoming King. Fuelled by jealousy manipulation and deceit, he aims at the crown and takes to destroy all who stand in his way including those closest to him.

Richard III is Shakespeare’s most charismatic, tour de force villain brought to the Cockpit by director Lawrence Carmichael in this fierce and bold retelling of the famous story.

I wouldn’t exactly say Ben Forster appearing as himself in this musical comedy is a career highlight (he is, after all, someone who has played the … END_OF_DOCUMENT_TOKEN_TO_BE_REPLACED

It’s an intricate plot, laced with some subversive humour - that the female character is simply called ‘The Woman’ (Molly Lynch), for instance, is … END_OF_DOCUMENT_TOKEN_TO_BE_REPLACED

Andrea McArdle didn’t, when the 1978 movie Rainbow was released, look or sound like Judy Garland, and she still doesn’t. You’d be forgiven for … END_OF_DOCUMENT_TOKEN_TO_BE_REPLACED

TENNIS ELBOW is the first play that John Byrne has written for thirteen years, and is in fact a companion piece to his critically successful Writer’s … END_OF_DOCUMENT_TOKEN_TO_BE_REPLACED

It’s all a bit banal, really - or perhaps I’m too heavily influenced by some of the other online productions that I’ve seen recently, which deal with … END_OF_DOCUMENT_TOKEN_TO_BE_REPLACED