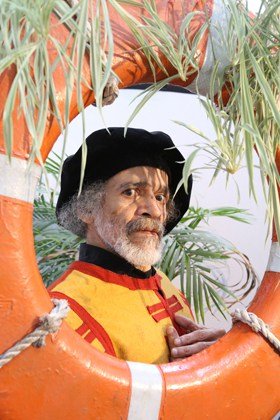 Ever thought about Christopher Columbus much? Apart from a quick mention during history at School, I can honestly say I’ve never given that much thought to the the discoverer of the ‘new world’. And yet, I could be making a huge mistake by dismissing old C.C., as John Agard points out rather brilliantly in his one-man show Roll Over Atlantic which I caught at the Royal Festival Hall.

Following a wonderfully funny and whilst not entirely flattering, at least honest introduction, Christopher Columbus (John Agard) comes onto the stage dressed in a curious mixture of modern day and fifteenth-century clothing. As Columbus tells his story, John takes on the role of Columbus himself and tells his story. The first point concerns Columbus’ origin and despite many countries and historical fantasists claims, the chap was a Genoese weaver’s son. Blending a mixture of historic fact and satire, and utilising the medium of poetry, song and the disembodied voice of the Atlantic ocean, John takes the audience with Columbus on his voyage to find a new route to the Orient. Over the period of around ninety minutes, we discover that the journey was long and hard,with talk of mutiny growing more vociferous as time went on. Ultimately, Columbus’ voyage would probably have been successful if the American continent hadn’t got in the way. As Columbus explores the area he has stumbled upon, there is a truly magical scene where John is behind a mask with a single blue light on him, naming each island Columbus visits.

I don’t want to give too much away, as this is very much a show to be experienced, but John delivers an interesting take, not only on Columbus and his driving forces but, in a really remarkable and memorable scene, he examines the lives of one of nature’s smallest and most deadly predators in wonderful detail.

Roll Over Atlantic is good fun and actually quite educational as well. Apart from the production itself, the programme has lots of interesting quotes from historians that shed a lot of light on the effect Columbus’ accidental find has had on the world since 1492. The production itself has a nice friendly feel about it. There is something about John which is instantly likeable and as soon as he arrives, he has the audience eating out of the palm of his hand. Mark Hewitt’s direction was superb as the performance looked and felt so naturalistic. The music by Thomas Arnold worked well and the songs were nicely fitted into the narrative so that the whole production flowed nicely.

All in all then, I really enjoyed Roll Over Atlantic which was well researched, nicely put together and presented. This is a show that feels like it would be suitable for a variety of audiences and venues and I had great fun watching it.

A creative departure from his many poetry collections, John Agard brings his irreverent wit from page to stage, as he variously takes on the voices of Christopher Columbus, the Atlantic, a native shaman, a mutinous crew, and even a chorus of politically-engaged mosquitoes. Written in verse and performed against a background soundscape of Atlantic murmurings and symphonic mosquito buzzing, Agard takes his audience on a fantastical, fanatical historic voyage that still bears relevance to contemporary issues. Roll Over Atlantic is a satirical revisiting of the voyages of Columbus. Whether glorified or vilified, Columbus’ accidental ‘discovery’ of the so-called New World gave a kickstart to globalisation, bridging Europe, Africa, Asia and the Americas, and joining forever the fates of these separate hemispheres and eco-systems

‘My influences behind my latest show include what I would describe as having the sentiment of the “Poetsonian” – a combination of poetry and the rhythms of calypso – and the satirical, irreverent potential of cabaret. As a former Poet In Resident at the National Maritime Museum, producing work to accompany objects in the museum’s Atlantic: Slavery, Trade, Empire gallery, I found myself wondering how could the Atlantic, so tainted by the slave trade, find redemption, “to make a libation of itself”’ – John Agard

I hugely enjoyed The Shawshank Redemption. This 2009 adaptation by Owen O’Neill and Dave Johns is based not on the 1994 Columbia Movie but on Stephen … END_OF_DOCUMENT_TOKEN_TO_BE_REPLACED

This play is, I must admit, intriguing stuff. Michael Aleen (Gwithian Evans) is a patient in a secure psychiatric hospital - and that is the correct … END_OF_DOCUMENT_TOKEN_TO_BE_REPLACED

Some one-person shows feel like full-fledged plays with various characters and moments enacted by a single actor; whereas other single-performer … END_OF_DOCUMENT_TOKEN_TO_BE_REPLACED

According to a friend who holidayed in Cornwall, “everything” in Cornwall is Cornish - that is to say, there are far more products that have some sort … END_OF_DOCUMENT_TOKEN_TO_BE_REPLACED

Harold Thropp (Dereck Walker) is not a happy man. Railing against practically everybody else involved in the panto production he is in, including the … END_OF_DOCUMENT_TOKEN_TO_BE_REPLACED