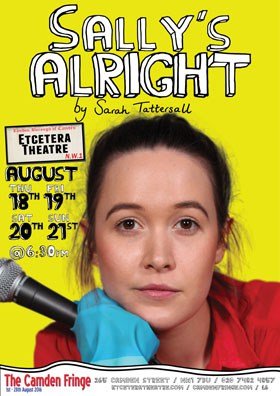 With a running time of about an hour this comedy tells us the story of Sally (Sarah Tattersall). She’s cleaning the stage of a comedy club, hesitant to go to the mic but desperate to all the same. Through clever lighting Sally is beckoned over and starts to tell the audience her story. It is one of love, men, loss and men again. Sally doesn’t see the jobs she holds, and possibly the world, exactly as those around her see it. She goes from a well known (people know her, just not what her name is) ice-cream seller entrepreneur,  to a celebrity to be seen at events with people (read escort, bordering on prostitute but only in her “manager’s” eyes) to a train platform announcer who performs to her audience. Needless to say things don’t go well in these jobs, it is always a man. Sally aims high, she just seems to have a predisposition to fail.

We are treated to a couple of songs, Tattersall has a lovely voice, a very well written story, also by Tattersall, superbly delivered in a smooth enjoyable fashion with plenty of jokes to keep the audience laughing. Tattersall has written this piece ensuring there is no shame on the part of Sally about anything she has done to get where she is; It is good to see a female character not conform to, what some people would think is, the norm. Even though there were a couple of jokes that would have been criminal to not use, being so obviously set up, we were figuratively kept on our toes with where the story would go next.

Well worth a visit if you get the chance.

Sally’s Alright
Sally has done and seen it all. Now a cleaner in a comedy club, distracted by her boredom and delusions of fame, Sally is convinced that the empty stage is desperate for her grand debut. In this intimate, yet outlandish conversation, she exclusively reveals all about her life, love and loss to her fans. Whether they are asking, or even there at all, is another matter!