Home » Reviews » Review of Sex With Strangers at Hampstead Theatre 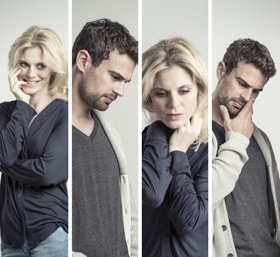 There’s something ironic about writing a review on a piece of theatre that has dialogue to the effect of who cares what some two-bit reviewer thinks of my work anyway?” Irony aside, Sex with Strangers is an honest and thought-provoking production examining the changing nature of human relationships, definitions of success and the way in which modern technology defines who we are.

Directed by Peter Dubois and performed in the intimate Hampstead Theatre, the production is equal parts warmth and humour as it is unsettling and challenging. A cast of two, the show centres around the characters of Olivia and Ethan; one a talented yet unappreciated author resigned to a life of hobby writing, the other a charismatic celebrity blogger on the verge of finishing a screenplay. The immediate chemistry between characters is as wildly obvious as the traits that polarise them, but as the script progresses it becomes clear that while their definitions of success could not be more opposed, they both long for the achievements of the other.

The script is written with poignant symmetry, and despite a complete shift in power and undeniable growth in both characters, appears to end on almost the same discussion with which it begins. Opening in a secluded cabin in Michigan, Laura Easton presents a modern-day romance; two people, undeniable attraction, the ability to provide the other with all they are longing for – what could possibly go wrong? According to Laura Easton; ambition, desire, and Google.

The production has some incredibly funny moments, particularly from Ethan, portrayed by Divergent star Theo James. Introducing us to the confident and charming entrepreneur and slowly unveiling the complex and unfulfilled human being buried beneath, James portrays this role with honesty and depth. He repeatedly raises the stakes and forces us to question where his true motivation lies and whether he can be trusted.

Coming into her own in the second act is Emilia Fox’s Olivia. Olivia is at a turning point in her career, somewhat resigned to her stasis and a foreigner in Ethan’s world of technology and celebrity. Fox makes Olivia easily accessible to audience members, unapologetically revealing her insecurities in a way that makes her a personable and relatable character. She complements James’ Ethan beautifully but does not take the balance of power from him until the second act, despite his disarming moment of vulnerability towards the end of the first. And no, I’m not referring to his risqué ‘book moment’, though it certainly was disarming!

Sex with strangers is funny, heart-warming, thought-provoking and just a little bit unsettling – everything a brilliant production should be. Challenging the audience to consider who we are online and how this impacts our relationships, the story is elegantly portrayed with incredibly honest performances and a clear vision from director Peter Dubois. Hampstead Theatre certainly have something special on their hands!

‘Look, I’m giving you another chance to show the world how talented you are. Take it. It’s worth the risk’

Olivia, an attractive and talented but underappreciated mid-career writer, is unexpectedly trapped overnight in a secluded, snowed-in B&B with Ethan, an equally attractive and wildly successful young blogger.

Her latest novel is an unsung masterpiece; his blog is being made into a movie. She prefers books; he prefers eBooks. She is anonymous; he has half a million Twitter followers. But opposites soon attract passionately as each realise they want more of what the other has. But the closer they get, the more they must confront the murky side of ambition, success and Wi-Fi…

Emilia’s stage credits include Coriolanus and Richard II (both Almeida Theatre) and Good (Donmar) and her TV appearances include Silent Witness, Merlin and The Queen.

The pairing of work by Bob Dylan and Leonard Cohen in a single recital is a logical move. Though the latter died five years ago, his and his old … END_OF_DOCUMENT_TOKEN_TO_BE_REPLACED

If the dialogue wasn’t quite so eclectic and engaging, I might have decided to attempt to have kept a tally of how many times a trestle table is … END_OF_DOCUMENT_TOKEN_TO_BE_REPLACED

Doctor Who: Time Fracture by Immersive Everywhere has plenty to exhilarate both avid and casual Doctor Who fans, delivering on its promise to let … END_OF_DOCUMENT_TOKEN_TO_BE_REPLACED

A brief review of a brief play. It is, as the Prime Minister (Lisa Day) observes, extremely unlikely that her ‘letter of last resort’ would ever … END_OF_DOCUMENT_TOKEN_TO_BE_REPLACED

It’s a production of Hamlet that starts at 7:30pm and manages to come down on the ‘right’ side of 10:30pm - the hardcore fans and followers of … END_OF_DOCUMENT_TOKEN_TO_BE_REPLACED