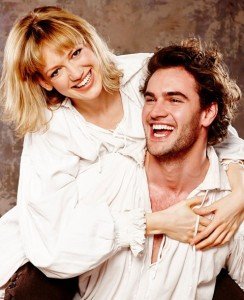 Finally, Shakespeare In Love is where it belongs; in the theatre. A joyfully simple, rambunctious romp such as this can only suffer from the distancing afforded by the silver screen; it needs the intimacy and the immediacy of the theatre in order to be fully appreciated, with the smell of sweat and greasepaint in the air and the groans and cheers of the audience ringing from the rafters.

This is no deep, intellectually study of the trials and motivations of the bard, it is a tale of Shakespeare such as the man himself might have written; full of mistaken identities, naughty shenanigans, disapproving fathers and duels. It knows exactly what it is and has no pretentions to be otherwise, and from the very beginning, where we see a hapless, chubby fellow being dangled precariously over a fire-pit whilst exchanging witty banter with his tormentor, we are swept up into the cheerful ridiculousness of it all. The plot, such as it is, is as follows: Our hero Will is suffering from writers block and plagued by wrathful theatre managers and creditors. He finally finds his muse, the noble Viola de Lesseps, and his leading man for his new play, Romeo and Ethel The Pirate’s Daughter, but he is blissfully aware that they are one and the same. That he is aided and abetted in his professional and romantic misadventures by his friend, the wryly patient Kit Marlowe, is an interesting wrinkle.

The chaos thankfully restricts itself to the story; everything else is brilliantly smooth and well oiled. Though the stage is permanently crowded and action-packed it never feels messy, the scene changes are effected with the minimum of disruption and the theatre scenes themselves feel beautifully authentic. The set is cleverly constructed to give the feeling that you are actually in the Rose Theatre, and we go from being the audience to being back-stage spies simply by dint of the performers turning round. The dialogue is seamless and the gags, although they can be spotted a mile away, are very funny. “Shakespeare? Never ‘eard of ‘im.” “Well, I think he’s got potential.”

The cast enter fully into the spirit of the thing and are as bawdy, comical and unselfconscious as one could wish. Tom Bateman is a harassed Will and Lucy Briggs-Owen shows stupendous comedy skills as Viola, her wonderfully mobile face going from joy to despair and back again in the space of a moment. Paul Chahidi is a brilliantly hapless Henslowe, Abigail Mckern does a very funny turn as the obligatory nurse, and Anna Carteret is Judi Dench perfect as Queen Elizabeth.

The tone of the play is somewhat uneven at times; the more tragic elements of the story seem to inconvenience the writers somewhat and are glossed over as quickly as possible in order to get back to the all-important comedy. Tom Stoppard’s dry, witty pen is thankfully evident throughout, raising the script above a mere Hollywood-style caper, and the rehearsal scenes will certainly strike a chord with anyone involved with amateur dramatics.

The description of putting on a play as “a series of insurmountable obstacles on the road to total disaster” certainly elicited a lot of knowing guffaws. There are also enough Shakespearian and cultural references to please the more intellectual element of the audience, however, this is certainly not a play for the high-minded. As the characters kept saying, “I liked the bit with the dog”, and this is how I suspect many of the audience members will describe Shakespeare In Love. Nevertheless, it is all jolly good fun and a very good example of theatre as it ought to be; for entertainment.

The background stays largely the same throughout the performance, and appears to resemble the hairstyle of Elle Woods (Courtney Bowman). Regardless, … END_OF_DOCUMENT_TOKEN_TO_BE_REPLACED

Everyman is one of the earliest printed plays, originally written in Middle English and first performed around 1510. It is a morality play, popular … END_OF_DOCUMENT_TOKEN_TO_BE_REPLACED

After being closed for over two years due to covid, the Arcola Theatre has re-opened with Barney Norris’s love song to the people who raised him, We … END_OF_DOCUMENT_TOKEN_TO_BE_REPLACED

Now in its 15th year, La Clique have firmly established their place on the world burlesque circuit and this year’s London cast bring their infamous … END_OF_DOCUMENT_TOKEN_TO_BE_REPLACED