Home » Reviews » Review of Silent Screams at The Broadway – Barking 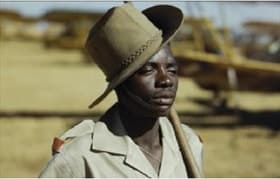 There are a number of plays that consider events in World War One. An adaptation of Sebastian Faulks’ novel Birdsong played at what was the Comedy Theatre (now the Harold Pinter Theatre) in 2010, and I liked the 2014 revival of Stephen MacDonald’s Not About Heroes, at Trafalgar Studios, about the friendship between war poets Wilfred Owen and Siegfried Sassoon. Then, of course, there’s the National Theatre’s War Horse.

I haven’t come across anything quite like Silent Screams before, however, which charts the story of the Reverend Joseph Chilembe (Larry Olubamiwo), a Free Church minister in what was known as Nyasaland, present-day Malawi. The details are fictional, but the storyline as a whole is indicative of what happened there during World War One.

The audience becomes Chilembe’s congregation, at least as far as scenes set in the Ntechu Baptist Church are concerned, and we stand to sing hymns (sheets are provided). I will not attempt a theological analysis either of the hymns or of Chilembe’s preaching, suffice to say the latter was very much of an inspirational nature. This unassuming audience / congregation were happy to respond with the ‘Amens’ and ‘Hallelujahs’ as required, which I must admit I found slightly amusing. It did mind you, provide an authentic churchy atmosphere.

One does not, I hasten to add, require a background knowledge of organised religion to follow events in this play. Chilembe’s course of action and mobilisation of parishioners was related to concern and anger regarding the political situation in Nyasaland at the time, and not a rash display of unorthodox behaviour because God spoke to him through some sort of vision. One or two of the scene changes could have been a tad pacier, particularly given an increasing sense of urgency in both camps, Chilembe’s and that of the Governor General (Paul DuBois).

There’s more than a whiff of the musical Les Misérables in this play, with a charismatic and inspirational leader of a revolution whose members become suddenly and acutely aware of their likely fate once it is realised the general population has not, for whatever reason, answered their call to arms. A regiment called the King’s African Rifles was where virtually all young black men in Nyasaland were assigned, and it is only through a more constructive successor Governor General (Jack Silver) that there’s any hope of easing tensions between the colonialists and the locals.

While not all of the dialogue was delivered as convincingly as it could have been (though I suspect this will improve as the run progresses), a long fight scene was executed with considerable vigour, and some live drumming added to the already anxious ambience. It’s plot-heavy, and the inclusion of personal visits to the pastor’s parishioners provides a personal touch to proceedings, as well as allowing the audience to witness some subtle but significant character development.

The play is nuanced enough to include various opinions on strategies for attacks and counter-attacks on both sides. Footage of World War One seldom include black people, which makes plays like this one all the more important, demonstrating the lasting impact of forcing people into war, the consequences of which were as devastating and far-reaching in Africa as it was in the West. A compelling and compulsive production.

‘Silent Screams’ is a compelling story of courage, resistance and self-sacrifice.
Set in Nyasaland in 1917, Joseph (Larry Olubamiwo), a local Church Minister is furious at the oppression on the plantations and the forced conscription of local men to fight a European war. When his appeals to the Governor-General (Paul DuBois) fail, Joseph plans a revolution. His life is in danger.

This isn’t the first production to go down the road of referencing a one-star review of their show (from a different publication, I hasten to add). … END_OF_DOCUMENT_TOKEN_TO_BE_REPLACED

Two sisters reunite after the death of their mother, and secrets pour forth. Robert Holman’s new play gently exhibits talented classical acting in a … END_OF_DOCUMENT_TOKEN_TO_BE_REPLACED

Everyone’s vexed in this show, though some have clearer reasons to be than others. Mrs Driscoll (Tameka Mortimer) is struggling with a home life that … END_OF_DOCUMENT_TOKEN_TO_BE_REPLACED

The penultimate production of the 2021 Tête à Tête Opera Festival, based at London’s Cockpit Theatre and showcasing contemporary and avant-garde new … END_OF_DOCUMENT_TOKEN_TO_BE_REPLACED

Relatively Speaking premiered in 1967 and is the sort of show that is, by contemporary standards, very much of its time, and not just because of … END_OF_DOCUMENT_TOKEN_TO_BE_REPLACED