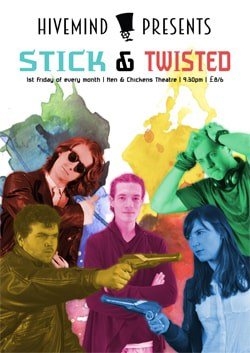 When you stop and think about it, all of us have to improvise every single day. The bus doesn’t come, or there are no jacket potatoes left in the canteen, there are systems issues at work, etc. Every day something happens that makes us change from our normal and expected routine and make up our next action on the spot. And that, my friends, is the essence of improvisation. However, I think I can safely say that the majority of us wouldn’t be happy standing on a stage, under harsh lighting, frantically improvising stories for a paying audience, would we? Well, that’s what improv group Hivemind do in their show Stick and Twisted which I saw at the Hen & Chickens Theatre last night.

The show itself is unique every time it is performed and therefore there is no point in telling you exactly what I saw, so to give you a rough idea. Hivemind are 5 very personable folks going by the names of Alex O’Bryan-Tear, Anton Evans, Ed Elcock, Harriet Cartledge and Jack Lawrence. Three of them – Alex, Ed and Harriet – take it in turn to direct a scene. The scene can be anything and is based on suggestions from the audience, Each scene lasts roughly five minutes and at the end the audience gets the chance to either stay with this Director (Stick) and take the story to the next level or start a new scene (Twist) with the next Director. If the audience chooses to Stick then the Director wins a power-up card and at the end of roughly sixty minutes, the Director with the most cards wins that night. Sounds simple but, in reality it takes people well-versed in the improv arts to be able to pull it off successfully.

Now, although I have seen a few improv shows before, and have always had a good time at them, I’m not that knowledgeable about the technicalities of it as an art form. So I took Michael, a friend of mine who happens to be an improv performer along with me for his semi-professional view. On the journey home, he was explaining the different styles employed including Long Form, Short Form and Time Dash. Personally, I am probably none the wiser – I thought in improv you just made things up – but, like me, Michael was really impressed with Hivemind’s show. My particular favourite was the timeline element where each small scene took place earlier along the storyline than the previous one. This was absolutely brilliant in concept and execution and really fabulous to watch.

The Hivemind team obviously know each other extremely well and that shows in the confidence and chemistry their performance generates. Each member is there for the others and there seemed to be a genuine love for each other and the show they were performing. A quick mention to the talents of Light Operator Ellie Griffiths and Keyboard Player Stephen Gage for some sterling work backing up the unexpected antics of the five main performers.

So far then, it’s been nothing but praise for the show. However, a couple of negatives for me. The first was that the show overran a bit which, meant that although still watching and enjoying the performance, thoughts started to turn to last trains, and getting home late. And the other thing was the addition of music. Michael informs me that quite a few improv teams add music to their show and I could understand if there was going to be a musical theatre element to the performance but there were the odd occasions when I found the music slightly distracting. However, I have to say I absolutely loved it during the Voldemort/Sherlock Holmes scene. Still, these are both extremely minor points and didn’t stop me having a thoroughly good time.

To sum up, then, Hivemind presents: Stick and Twisted is a wonderful example of the art of improvisation showcased by five extremely talented performers who really know their craft.

Sixty minutes. Three directors. One twisted Hivemind.
Three directors compete to win your heart. Taking inspiration from any genre, style, concept, or premise you can imagine, each director devises a story which the rest of Hivemind acts out on the spur of the moment. At the end of each scene, you choose whether to stick, and see where the story goes next, or twist, and let the next director take the reins. The director with the fewest scenes under their belt must pay a terrible forfeit.

Stick and Twisted is a brand new approach to improvised comedy from the “imaginative and hilarious” Hivemind. We’ve just completed our debut show run, the gangster noir An Offer You Can’t Refuse, which was a hit with the critics: