Many things are billed as being “an experience like no other”. Strictly speaking, no experience is like another experience; they are all unique and unrepeatable. That may change in a future of time travel, a future which I am not holding out much hope of witnessing. Until that time, we have a limited number of ways in which we can experience bygone times; to have a taste of what things might have been like.

One of those ways, surely, has to be the theatre. This production of Sweeney Todd is about as immersive as they come. I have attended big productions in the West End and in other locales around the world but I have never attended one quite like this. It was, as they say, a “once in a lifetime experience”.

Mr. Todd’s literary debut was unglamorous. Serialised in a cheap, low brow publication (a penny-dreadful) called A String of Pearls between 1846 and 1847, the name of Sweeney Todd has since practically become synonymous with his premises on Fleet Street. This grim story of the demon barber, whose victims end up baked in meat pies, has been adapted for the screen and stage many times. Most famous amongst those adaptations is Stephen Sondheim’s 1979 musical, originally on Broadway. The dark hand of Tim Burton took the musical and made into a multi award-winning film in 2007 starring Johnny Depp and Helena Bonham Carter. More recently still, the show was revived at Chichester Festival Theatre in 2012 starring Michael Ball and Imelda Staunton to wide acclaim. Sweeney Todd has attracted some of the biggest names in huge, expensive productions. The Tooting Art’s Club (TAC) have decided to do it rather differently. 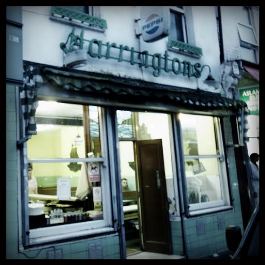 So, let’s start with the setting: Harrington’s Pie and Mash shop in Tooting. That’s right, you can enjoy a pie and then watch the show. I strongly advise you eat the pies first; you might not have an appetite for them after. Harrington’s has been making pies for over a hundred years and, in that time, very little has changed. They’ve installed some electric lights, but that’s about it. The setting is the real deal; no fakery involved. It’s delightfully sinister. Jeremy Secomb as Sweeney Todd is scary; wide-eyed throughout and wielding his chased silver razors, Secomb has taken to this role spectacularly. The homely Mrs. Lovett played by Siobhán McCarthy offsets Sweeney’s unbalanced persona brilliantly.

The close proximity to the actors (indeed, so close, that you are physically touching them at times) truly makes you feel part of the action; you sit at the very tables the meat pies are being eaten, frightened that you might be in the next one; I happened to be sat directly opposite the barber’s chair (not recommended for those of a nervous disposition).

If a pie and mash shop wasn’t enough, the TAC have collaborated with a real-life barbershop across the street and turned it into a bar for pre-drinks and the interval. It’s a real community production and represents the collective efforts of the people of Tooting. Producer Rachel Edwards says that putting on a performance of Sweeney Todd at Harrington’s is a long-held dream. £4000 was raised through a Kickstarter campaign to allow this to happen. I did a little research on how much it costs to stage productions on Broadway and the West End. Here’s what I found out: the original Broadway production of Wicked had a whopping $14million investment, cheap compared to The Lion King ($20million). West End musicals surely demand similarly high injections of cash (though these all pale in comparison to the 2007 film with estimated budget of $50million).

So then, it is remarkable that top-quality theatre can be produced anywhere and funded by Joe Average and Jane Plain down the street. Harrington’s was not designed as a theatre; it functions as a pie and mash shop just fine, but a theatre? With awkwardly positioned static tables, a serving counter and a staircase slap bang in the middle of the “stage” it seems mad, but it’s like Stephen Sondheim wrote Sweeney Todd for this wonderful little corner of London. The entire creative team deserves a huge amount of praise for this production. From the musicians to the technical crew to the performers themselves, everything is of a high standard; just as good as you would expect from a West End production. Thoroughly engrossing; funny and scary, this is fantastic. Sondheim I’m sure would be very happy with this interpretation.

I have just one minor criticism and that is the use of a flashing neon “hot pies” sign that bedecks the wall after the interval. Why? It was a glowing, modern intrusion into the dark Victorian milieu of the performance. Personally, I felt it was unnecessary and detracted from the overall experience.

Above all, I hope that this production can serve as an inspiration for regional theatre groups throughout the country, to use what resources and facilities they have available to them and to involve the people of the community. As Edwards writes in the programme, “The success of the TAC’s collaboration with Harrington’s has confirmed my belief that something unique and special happens when the arts and community come together in a shared enterprise”.

A quick word of advice to any attendees: bring something comfortable to sit on. Those rough wooden benches become noticeable after a while. Then again, the benches didn’t provide anything near the same level of discomfort as Sweeney’s razors.

The pies aren’t half good too…

While tickets are currently sold out, more are due for release soon. You’ll have to be quick to get one. I recommend you do.

If the audience were to be exposed to full versions of the seventy-four songs listed in the programme, it would be a very long show indeed. I suppose … END_OF_DOCUMENT_TOKEN_TO_BE_REPLACED

How can a play be both charming and devastating? Through its tight script, abundant humour and pitch-perfect performances, 4th Country manages to … END_OF_DOCUMENT_TOKEN_TO_BE_REPLACED

Britain, so a London cab driver once told me, is obsessed with the Second World War, as though it happened just recently. Power Luncheon would seem, … END_OF_DOCUMENT_TOKEN_TO_BE_REPLACED