Home » Reviews » Review of The Bacon Killer at Theatre Utopia 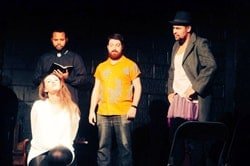 Take a bit of The Play That Goes Wrong, add a dash of Noises Off, a soupçon of US TV series Police Squad but don’t add any bacon and you’ve got the recipe for the very funny The Bacon Killer which has just spent a week making audiences at Theatre Utopia in Croydon laugh at the silly antics put in front of them by Misprint Theatre.

It opens with the “Director/Producer/Writer” coming on stage to tell the audience that they’ve been performing the play for ten years but some actors have dropped out suddenly so this evening’s performance might not be up to scratch. Then the play within the play starts.

The plot – if you could call it that – is set in New York in the 80s and follows two detectives, Dick Shakespeare and Kimberly as they try and find a killer (who has nothing to do with bacon) who is knocking off male policemen in the city. Shakespeare is British and obviously, a woman dressed as a man with a false moustache held on by elastic. Kimberly isn’t the brightest tool in the box and doesn’t realise he’s working with a woman disguised as a man! Along the way, we meet a multitude of characters as the chase for the killer takes us to various parts of the city including South African Town (sic) and the sleazy side of Times Square on our way to discovering who the killer is.

There are flashbacks, cocaine-fuelled hallucinations, and every cop cliché going. There’s some superb gags such as Shakespeare’s “life” story being told by describing the plots of various Hugh Grant movies, a very funny bit where the same money keeps changing hands as three characters try and bribe each other for information and an amusing running gag where the Stage Manager has to replace various actors (male and female) who haven’t turned up. Another stand-out moment is when from out of nowhere a Rastafarian fortune teller appears with the ability to tell people what their favourite crisps are!

It’s a very comical 70 minutes or so, that whilst for the most part moves along at a cracking pace, it does flag a little in the middle and too much time is spent with a couple of not very funny characters in South African Town but apart from that minor criticism, it’s an entertaining piece of theatre.

It’s a real ensemble piece and all eight actors deserve a mention. Megan Jenkins as Shakespeare, Tyrone Williams as the Detective Sergeant, Fortune Teller and others, Amy Toledano as the put-upon Stage Manager and Brian Chadarose as a very camp MC amongst others, aided and abetted by Tom McAdam, Anthony Portsmouth and Michael Alexander who all play a variety of roles superbly.

That leaves Jamal Chong who plays Kimberly and deserves a special mention. He not only wrote the piece (with the help of the rest of the cast) but directed it, produced it though Misprint Theatre, runs Theatre Utopia and probably swept the theatre afterwards! As I said in a previous review, he’s doing a wonderful job in a town that isn’t known as a hot-bed of alternative theatre. Theatre Utopia may be small but it’s perfectly formed.

We set the scene in 1980’s New York, where two detectives, Dick Whittington and Kimberly are on the hunt for an
elusive cop killer.

The action is non-stop and the humour is fast-paced, with jokes to make your Grandma’s teeth fall out and back in
again, you are in for one hell of a ride!