Planet Ayckbourn can usually be identified by the domestic dysfunctions that erupt beneath the outwardly placid surface of English suburbia. This has not been its sole appeal to those who have tracked its orbit over the past half-century, but it has been one of its most enduring.

Outwardly then, it’s a surprise verging on a shock to see him tackle a literally outlandish territory, set in a cataclysmic future more often spotted in science fiction. And yet, if you have followed the playwright’s own trajectory, you will know that he is a seasoned fancier of sci-fi and dystopian fiction.

The appeal of The Divide is that this is a theatrical take on a futuristic state in which the usual version of homo aycbournius appears unlikely to survive. But then appearances have always been deceptive in the playwright’s work. You could almost say that is their purpose.

In this immensely ambitious epic, completed close to his eightieth year, he presents us with a society which is as full of fear and hostility as the most hazardous of his drawing-rooms. A lethal contagion has wrought havoc on the population; contact between the sexes is life-threatening. 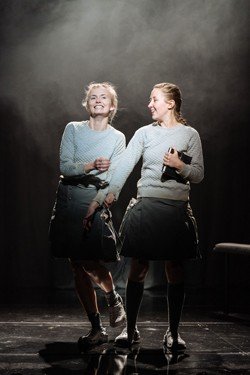 Ruled by an elusive and tyrannical character called The Preacher, society has had a, to say the least, radical solution imposed on it, whereby surviving adults are segregated by gender. Mean wear white to denote purity; women black to denote the opposite.

Enter, in the conflicted foreground, Elihu and Soween, a teenage brother and sister trying to make sense, if such a thing is attainable, of a strictly controlled community which is as fearful as it is fearsome. Then Elihu becomes besotted with Giella, who has not one but two radical mothers. Their liaison could not just result in their own deaths, but also plunge the country into revolution and civil war. If your familiarity with the playwright’s work makes you want to hear in these predicaments the echoes of his class-torn lovers, they are reassuringly audible. Imagine the families of Montague and Capulet in an Orwellian future – Twenty Eighty-Four? – and you get the approximate picture.

In its earlier form, premiered in Edinburgh last year, the play lived up, or down, to its name by dividing the critics as sharply as it splits its own characters. From such an experienced and stage-wise author, a two-part, six-hour marathon was unexpected, even if you take into account his sheer stamina for running his own and his creation’s obsessions down to the wire.

Here, for the Old Vic, it has slimmed down to a mere three hours and fifty minutes and is probably too long by an hour as he indulges his survivors in one post-match commentary after another. If he were starting out, some sensible old director would take him aside and say, “In future, Alan, show don’t tell.”

Although The Divide’s director Annabel Bolton may have let it overrun, her marshalling of a cast of thirteen is wonderfully vibrant and varied; in conjunction with Laura Hopkins’s ingenious design, it enables spatial divisions, the play’s central metaphor, to spring up and present themselves in every plane and at any height.

The result is knowingly bleak, in that you cannot help but see and hear separation. It is there wherever you look and, for all the removal of its world from ours, is a restating of the distance which in so much of his work is a
resident component of technically close arrangements; love, marriage, family, neighbourhoods, towns, regions and so on.

The Divide does what it promises and installs division into yet more provinces. The north, though never specifically located as Scotland, is as far removed from the south as is Sydney from Swindon. Above the unstated boundary live boorish males, little more than beasts; below it the women, rather stiffly corralled into a soap-and-water puritanism. In a way, this is just new Ayckbourn being old (as in young) Ayckbourn, satirising incompatibility as relentlessly as he once did in How The Other Half Loves, or Absent Friends.

In the context of such a body of work, The Divide may be something of collector’s item, despite its exuberant, hypercommunicative cast, with outstanding performances from Jake Davies as Elihu and Erin Doherty as Soween.

If ever there was a play whose success can be measured by its division of opinion, this is surely it.

Written not as a play but as a ‘narrative for voices’ by Alan Ayckbourn and directed by Old Vic Baylis Director Annabel Bolton, The Divide unfolds in a dystopian society of repression and seething insurrection.

In the aftermath of a deadly contagion which has decimated the population, contact between men and women has become fatal. Under the dictates of an elusive and authoritarian Preacher, an unthinkable solution has been enforced. The adult survivors are now segregated by gender and, physically separated, men wear white as a sign of their purity and women – still deemed infected – are clothed in black as a mark of their sin.

As new social norms prevail, brother and sister Elihu and Soween grow up learning the ways of their tightly controlled society. As they begin to glimpse the cracks in the system, Elihu falls for Giella, the daughter of two radical mothers, risking fatal disease and threatening to ignite a bloody revolution.