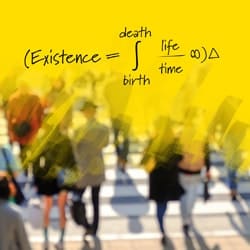 A relatively brief review for a relatively brief play. If there is a definitive existence formula in The Existence Formula, it went over my head, or I simply wasn’t paying enough attention. Each of the three characters, Nicola (Sarah Rickman), Susie (Kirsty Langley) and Graham (Tom Hamilton), has a monologue at some point, directly addressing the audience in what appeared to me to be streams of consciousness, albeit scripted ones, rather than anything highly dramatic. The rambling, if personal, manner of speaking gradually grew on me even if a significant amount of the details in the narrative aren’t really followed up on.

A long scene involved repeating a summary of a day in the life of young urban working parents, with increasing pace in each iteration, like something out of a pantomime. The effects on the audience are quite similar too, with spiralling levels of laughter as the actors struggle (or make it seem as though they are struggling) to keep pace with the speed of the scene. For some reason, a large number of adjectives, nouns and phrases were preceded by the word “hashtag”, which eventually became tiresome. Hashtag unnecessary. Hashtag repetitive. Hashtag please stop now. This was, to be fair, as far as I could tell, the scene’s intended purpose: to demonstrate how easy it is to become
stuck in a rut, to do things out of habit.

The narrative is very broad, encompassing a large range of topics from gender identity to fitness regimes. The process of giving birth was dramatized extensively, though this being a one-act play, I trust it is not too much of a spoiler to say this was inevitably going to be a short labour. The over-nurturing personality of a wordy midwife was parodied brilliantly. The imagined viewpoints of twins still in the womb was hilarious in places. The distancing effect the scene creates with this absurd exchange of opinions and perspectives allows the play to bring to the surface some home truths that would have been more uncomfortable in a more conventional dialogue.

That isn’t the only Brechtian element – scene changes are combined with costume changes, both done simultaneously in full view of the audience, who deliberately very much feel they are watching a performance rather than getting so engrossed and immersed in the action they ‘forget’ where they are momentarily. That there wasn’t anything tragic, violent or horrific that happened is refreshing, particularly as this new play sits alongside many other new plays. In the majority of those other plays, a sudden twist or a critical incident has an immediate and permanently detrimental impact on the play’s characters. Thankfully, there’s a bit more nuance involved here.

It could, I think, have been pacier, though I appreciate the need to start the day-in-the-life scene slowly in order to pick up speed later on. Overall, it’s an insightful debut play from The Juice Factory, with some witty punchlines and good acting.

We’ve written a play about death, but don’t let that put you off!
What do a lawyer, a wine merchant and unborn twins in an existential crisis have in common?

A show about choices; the significant ones, the small ones and all shapes and sizes in between. When it’s all totted up where does it leave you? Are you happy? Are you the best you could be? Do you really mean it when you say that?
We don’t have the answers, come help us try to find them.
Juice Factory present their debut show following a successful run at the Camden Fringe.