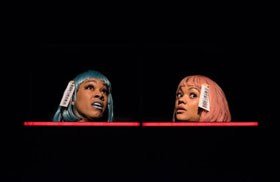 I didn’t intend to publish a piece on this show but I saw Eve Ensler’s The Fruit Trilogy at the West Yorkshire Playhouse two weeks ago and it strongly angered me to know that so many people might not get to see this piece of engaging, thought-shaking and powerful theatre. Closing night has come and gone but I’m hoping this can not only inform you but get you pondering or even asking for a revival. I can see this piece touring to spaces nationwide or receiving a strong run at the Edinburgh Fringe and certain West End spaces (the small studio theatre at Trafalgar Studios springs to mind). There is no weak link in this show that combats dark themes of sex-trafficking, feminism, body image, identity and the mentality of self-worth. This show provides the shocking, revealing disruption that the theatre scene desperately needs.

Eve Ensler, the playwright of the world-famous The Vagina Monologues, has created a collection of three short plays – Pomegranate, Avocado and Coconut, which come together as The Fruit Trilogy which is directed by Mark Rosenblatt. These plays are put in the hands of two incredibly talented actresses (Amelia Donkar and Carla Harrison-Hodge) who each take a play solo and work together in the first story, Pomegranate.

We are placed in front of two talking heads in futuristic-like wigs and it doesn’t take long before we realise they are prostitutes in a brothel, helpless to escape their male predators that they see coming day-in-day-out. Whilst one head is fixated on hope, the other is focusing on acceptance to her situation and that they are “already dead”. As they discuss how they can continue on with their fate it becomes all the more horrifying when one of the heads is chosen by a “customer”. This piece sets up the entirety of the show very well and sends the audience into a confused and disturbed state and let’s them know that this dark world is still very much alive today.

Carla Harrison-Hodge then takes the spotlight in the second piece, Avocado. Originally a solo piece written before Pomegranate and Coconut, Harrison-Hodge makes it her own and transforms into this abused youth who is off trying to seek asylum after the many unspeakable things that have happened to her. There is an odd hopefulness in her character that fools nobody and Harrison-Hodge makes sure the cracks in her character’s foundation are spotted early on, bringing every word she speaks to new levels. An incredibly layered performance that when her character finally breaks down, I broke down with her. Tremendous.

Finally, Amelia Donkar brings it home in the final piece, Coconut. What is probably the most thought-provoking piece of the three, Donkar addresses her audience with calm and a certain clarity that smooths out the tension left from Avocado. Donkar masters the stage and audience as she speaks about the body-ownership, spirituality and sexuality and how she wants to be able to share her body with us, but not have be a sexual thing. Ensler’s writing hits higher heights in this piece and Donkar delivers it perfectly. She becomes nude on stage for all to see and the audience (at least I believe so) feel the connection that Donkar’s character is after. This is the perfect finish from the mysterious suspense of Pomegranate, to the shockingly dark Avocado and finally, the cleansing, calming and oddly uplifting Coconut. I will say it again, I haven’t seen theatre this good for quite some time.

Throughout, Lizzie Powall’s lighting and Peter Rice’s sound add extra depth to the three pieces, increasing the intensity and representing these characters’ struggles and situations fantastically. It is chilling in Pomegranate, dark and chaotic in Avocado and lighter and uplifting in Coconut.

Rosenblatt has directed this piece of theatre impressively and it’s one of those productions where you can feel everyone involved is on the same wavelength and all are trying to achieve the same thing. Not only is this a strong piece of feminist theatre, it’s one of the best. Which brings me back to the reason I’m writing this – why the short, limited run? Eve Ensler is a playwright legend and the cast and crew involved reflect how great her work is. It’s a show that needs to be seen by theatre and non-theatre folk alike. Hopefully, this review will get you to at least research these people and pray to the theatre gods for a fringe run, a national tour, a West End run or all three! At the very least, it should have a published play-script. Again, this is the type of theatre we need!