There are two things about The Importance of Being Earnest that came to mind whilst I was still on the bus on the way to the theatre. The first is that it’s been done, and it’s been done so many times.

The many and varied previous productions over the decades have starred, amongst others, Sir John Gielgud, Dame Peggy Ashcroft, Dame Maggie Smith, Nigel Havers, Zoë Wanamaker and more recently, David Suchet. And that’s before considering the cast lists in the radio plays, television specials and films. The second thing about this play is that there is a reason behind its relative ubiquity – it remains an extraordinary script, furnishing audiences with much laughter and food for thought.

This production remains largely faithful to the original text. The most radical departure is the inclusion of a few musical numbers, sung with dry wit by Lane (Daniel Desiano-Plummer), demonstrating some good actor-musicianship. In spoken dialogue, too, this butler keeps his cards close to his chest, which juxtaposed well with the infinitely more spirited emotions of virtually everyone else.

The costumes were suitably late Victorian, but the set distinctly less so, with the backdrop comprised mostly of monochrome cartoon drawings of curtains, bookshelves, drawers and so on. I suppose there’s something about making the staging look as artificial as some of the airs and graces of the era that the production seems to make light of. In the end, however, there’s no escaping that the set looks more than a little cheap and tacky, and not at all with the refined gentlemanly nature of Algernon Moncrieff (Daniel Hall) at home in the city or John Worthing (Riley Jones) at home in the country. Further, the lighting could have been more imaginative, or at least a little more varied. 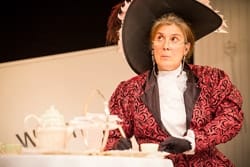 Taken at face value, it is just as bright inside Moncrieff’s flat as it is outside in Worthing’s garden. Some lines in the script have stood the test of time. When Lady Bracknell (Harriet Earle) announces to Worthing, “The whole theory of modern education is radically unsound”, she may be speaking in 1895 but some may argue the statement remains true in 2017. While this Bracknell may end up speaking with authority, her presence is not as imposing as it could have been (if anything because first impressions really do count), and it is her daughter Gwendolen Fairfax (Sophie Mercell) who shows herself to be confident and assertive. Her long dialogue with Cecily Cardew (Emily-Rose Clarkson), Worthing’s ward, was the highlight of the play, invoking much laughter in a trading of what these days could be called oneupwomanship.

The more the story evolves, the more bombastic the production becomes, and after a slow start, the audience’s patience is rewarded, particularly in a significant step-change in pacing after the interval. in the dying moments of the play, a resolution to a long-standing question came as Worthing consulted a reference book, which served as a reminder that there were ways of quickly finding things out before the days of algorithms and internet search engines. It’s one of those productions where one takes out as much as one puts in.

There’s nothing particularly ground-breaking to write home about. No matter. Solid performances all round make for a thoroughly decent couple of hours of humour, power dynamics and deceptions.

In matters of grave importance, style, not sincerity, is the vital thing.
John Worthing and Algernon Moncrieff are dissatisfied with their tediously mundane lives. To escape the burden of social obligation they attempt to win the hearts of two women who claim to only love men called Ernest. Both men create alter ego’s and become tangled in a web of mishap and misadventure.

The Importance of Being Earnest is a playful and amusing story of romance, secret identities and cucumber sandwiches. Often referred to as ‘A Trivial Comedy for Serious People’, Wilde’s most famous and successful play is one of the greatest comedies every written.

The Importance of Being Earnest News

The Importance of Being Earnest at London Vaudeville Theatre from 20th July to 20th October 2018.

Titus Andronicus is not usually a comedy, it is usually a bloody, villainous and vengeful tale, but tonight it is a comedy and a rather amusing one at … END_OF_DOCUMENT_TOKEN_TO_BE_REPLACED

This show is not without clichés - there are three of note in this production. Firstly, the French horn of the show’s title is personified, speaking … END_OF_DOCUMENT_TOKEN_TO_BE_REPLACED

There’s very little in the way of set in this show: aside from chairs, a few crash barriers and at one point, a red carpet, the actors’ movements … END_OF_DOCUMENT_TOKEN_TO_BE_REPLACED

South African born, but raised on the Isle of Man, Pierre Novellie is a true raconteur rather than just another 'stand-up' comedian. He says about his … END_OF_DOCUMENT_TOKEN_TO_BE_REPLACED

This show, Willy Hudson began by saying, is about himself. It is written by himself, is directed by himself and executive produced by himself. Almost … END_OF_DOCUMENT_TOKEN_TO_BE_REPLACED