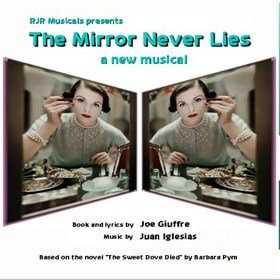 The Mirror Never Lies is a musical play performed centre stage with the audience surrounding. It uses minimal props and vintage film and asks you to really ‘buy’ into the 1960s Carnaby Street era using just your imagination. The music and lyrics are very authentic with the keyboards channelling the psychedelic atmosphere and the craving for mind expansion and search for intellectual and personal improvement reflected.

The story is a traditional tale of older woman shuns man of maturity and sophistication for toy boy; toy boy meets girlfriend, toy boy leaves both women to go New York and becomes a boy toy for a very predatorial gay playboy. It could almost be a British farce, and there are some very comical moments but it is much deeper than that. The corruption of innocence and the desperation to hold onto youth and beauty are all part of the circle of life illustrated through this neat little story.

The cast are all strong. Francesca Ellis plays the seductive Leonora and is both a joy and a heartbreak to watch. She carries the power and elegance of fading beauty confidently; although she is a manipulator she has a heart and the showing of this vulnerability is very poignant and engaging. Her voice is beautiful and clear taking us along her journey.

Ryan Frank is James, the object of everybody’s affections. His transition from virtuous naivety to experienced and educated in arts, culture and sex is compelling. His sweet singing voice is almost choral and religious and captures the gentle trusting nature perfectly; especially when compared to the rough sexy grinding voice of Spencer O’Brien playing Ned, the sexual predator intent on getting his man and any cost. Spencer’s voice was amazing and unique and rich and almost sinister in tone which is a very impressive feat of performance.

The rest of the cast were all enjoyable. Jon Osbaldeston as Humphrey a would be suitor for Leonora was in fine voice and had great comic timing. Jennifer Harraghy has a sublime honeyed voice, faultless for portraying the girlfriend scorned. Darrie Gardner was fun and lively as Leonora’s friend, I would have liked to see more of her and Craig Keith was very good and versatile at adapting to different supporting character roles.

The whole performance was enjoyable. My only disappointment was the staging. I was directed to a seating area where I couldn’t possibly see some of the action; including a scene which went on above and behind me and also the lighting allowed me to watch the audience as much as the cast. I would definitely recommend the show. Just be careful where you sit…

London in the 1960s, Carnaby Street: the smell of pot in the air along with the raw music of a new generation. A woman of a certain age and another era, addicted to collecting beautiful objects falls in love with a much younger man instead of his more “suitable” older uncle. Finding that the young man is already entangled with a girl, she uses her guile to crush the young woman’s hopes only to discover a second, male suitor has secured the young man for himself using her very own methods. The world around her accepts that with the passing years we all must change, but she will not bend.

THE MIRROR NEVER LIES – A MUSICAL
A Musical Story About The Power Of Beauty
MON 14 NOV to FRI 18 NOV 2016
http://www.thecockpit.org.uk/

Titus Andronicus is not usually a comedy, it is usually a bloody, villainous and vengeful tale, but tonight it is a comedy and a rather amusing one at … END_OF_DOCUMENT_TOKEN_TO_BE_REPLACED

This show is not without clichés - there are three of note in this production. Firstly, the French horn of the show’s title is personified, speaking … END_OF_DOCUMENT_TOKEN_TO_BE_REPLACED

There’s very little in the way of set in this show: aside from chairs, a few crash barriers and at one point, a red carpet, the actors’ movements … END_OF_DOCUMENT_TOKEN_TO_BE_REPLACED

South African born, but raised on the Isle of Man, Pierre Novellie is a true raconteur rather than just another 'stand-up' comedian. He says about his … END_OF_DOCUMENT_TOKEN_TO_BE_REPLACED

This show, Willy Hudson began by saying, is about himself. It is written by himself, is directed by himself and executive produced by himself. Almost … END_OF_DOCUMENT_TOKEN_TO_BE_REPLACED