Home » Reviews » Review: The Other Place at Park Theatre 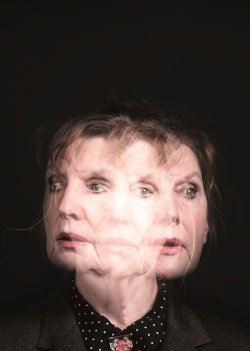 Ian (Neil McCaul) and his wife Juliana (Karen Archer) call their second home ‘The Other Place’ – nothing else, not even the name of the town or village it’s in. The show’s title is thus explained. Or is it, in its entirety? Are there metaphors to be drawn from the evening’s proceedings that suggest there is, psychologically and metaphorically speaking, some other place where the characters’ thoughts drift towards? For example, when the couple’s daughter, Laurel (pronounced ‘loh-rehl’ rather than ‘loh-rul’) starts playing music in her bedroom at full volume to drown out the sound of her parents calling her to come downstairs, it can be argued that she enters, if only in her own mind, a lovely place where family matters aren’t simmering away and there aren’t quarrelsome relatives to deal with.

There are other possible examples, but let’s not reveal everything that goes on in this ‘straight through, no interval’ production that packs in more details and narrative than some plays do in twice the running time. I wonder, though, if it is even possible to reveal all: because Juliana Smithton develops a condition that is not, as she had reason to believe on account of family history, brain cancer, she effectively becomes an unreliable narrator. Her recollection of events, right up to the curtain call, is strong and vivid, but one can never be entirely sure that what she is saying is an accurate reflection of what transpired.

This isn’t the first production to hit the London stage in recent years that explores mental health and, in particular, the effects of cognitive disability. Perhaps the highest profile one was an English language version of the French play The Father, which did a stint in the West End before going on a national tour. Here, the staging is rather sparse – even the PowerPoint slides that the intellectual Juliana uses in public speaking are just flashes of light on the stage. No matter, in this case, as it keeps the focus on what she is saying, and thus the audience must listen to her words in order to follow her line of argument.

There’s a feistiness about Juliana that gives the play as a whole an edginess and an increasingly palpable dark sense of humour. McCaul’s Ian, by contrast, just seems more exasperated than anything else, struggling to make sense of Juliana’s ever more erratic conduct. But if the main characters are well-developed, the periphery characters are less so, to the point where the cast list names Eliza Collings and Rupinder Nagra as ‘The Woman’ and ‘The Man’ respectively, and even this is disingenuous, as they actually play multiple characters between them.

In a world where little, if anything, aside from death, politicians bending the truth and council tax, has any certainty, the play is a demonstration of what it is to live with doubts and imponderables. A brief but intense show, and a formidable and absorbing production.

Confident, intelligent and highly successful neurologist Juliana Smithton is at the top of her game.
But while delivering a lecture to a roomful of doctors, she’s interrupted by a series of disturbing events. With her husband filing for divorce and her health in the balance, Juliana’s life suddenly starts unravelling.

“How much can you lose, if you can’t find yourself?”

As details emerge of a ten-year-old mystery, fact blurs with fiction, the past collides with the present, secrets are spilled and slowly the elusive and shocking truth is revealed.