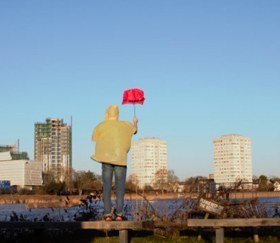 The Sea is steadily paced to the end, something of a paradox in a show that explores what it is like to start out ‘in the sticks’ and then move to London later on. The (not very) imaginatively named A and B (Sarah Dean and Rebecca Hendri) share awkward but nonetheless highly plausible situations and conversations, initially meeting at a London running club. One runs (pun acknowledged but unintended) late because that’s what happens in the frenetic pace of living in the capital – at another meet-up, some weeks later, it’s the other one who finds herself offering profuse apologies.

A large number of still images and a more modest number of videos are used to help establish each scene on a stage otherwise devoid of set and props, with the notable exception of a clothes-rack stage left, which – without giving too much away-– does get used during the show. Some of the metaphors seem to scream even as its narrator stoically carries on trying to live the London life as calmly as possible.

One scene, for instance, sees A attempting to keep pace with a running group, but it isn’t her regular one. It’s some sort of elite group that goes faster than she is used to. Unable to maintain their level of momentum, she crashes to the ground, gasping for breath. I wonder how many people, whether they live and/or work in London or not, have, proverbially speaking, aspired to something beyond their limits. Is it better to have tried and failed than not to have attempted at all? I don’t know, inasmuch as I don’t think either ‘yes’ or ‘no’ is universally applicable. These are the sorts of thoughts this production provokes.

The lady can be taken out of the country but the country can’t entirely be taken out of the lady, and her endeavours to engage in polite conversation have mixed results in a city where people who are known to each other barely have time to stop and chat, let alone those who aren’t. A long but observant scene goes into much detail about mobile telephone ‘apps’ (no names mentioned: this isn’t an advertisement for certain products per se), and which ones perform which purpose. Cue panic stations when the smartphone doesn’t function as it should, and an unusual moment in which (shock horror) a phone is used to call someone.

This sort of ironic humour permeates the production, and thankfully it isn’t lost on A, who seems fully aware that all that outdoor running she does in the capital involves breathing in an exorbitant amount of polluted air. Maybe, in the words of the song, it’s because I’m a Londoner – and have never lived anywhere else – that I find it difficult, time-wasting even, to do what the show suggests is a good thing: stop, step back, take time out, reflect.

I suppose this is why I personally found the show a tad sluggish, and hot-footing it to Camden People’s Theatre having just seen a briskly paced show at the tubthumping Vault Festival probably didn’t help in getting into the deliberately serene atmosphere of this production. Then again, that’s exactly what the show asserts – people like me try to do too much in too little time. It’s a little rough around the edges, and a slightly longer run might have allowed for a slicker and smoother show. As it stands, this was a very thoughtful and well-performed play.

The Sea is a new play by Tom Froy which explores isolation and disconnection from human contact in London.

An individual confronts their feeling of being alone in a city of 8.7 million others. They journey through London to see how other people ‘do life’, going to football matches and main squares, trying to overcome their sense of insignificance. Oxford Circus is too busy, you feel lost; Tottenham Marshes are too wide, you feel lost as well. Alone in a swarm of people; alone in an empty field.

Social media and digital communication seem to provide an escape. So many more bars, restaurants, cafes, galleries, parks, pubs, novelty pop-ups to discover and explore. How could anyone feel lonely in a city where there are 3615 pubs, 245 nightclubs and 108 cinemas?

Could you call London a community? All we’ve got in common is that we’ve never met and likely never will. If every seat was sold in the run of this play, the audience would constitute 0.00002% of the population of the city. 60 individuals shared the same space for an hour and a half on one night. How could that feel significant when there are 8787832 others?

Does digital communication overcome isolation? Are we more or less connected? Is the urban environment damaging our happiness? Can anyone really feel like someone in a big city?

8.7 million people live in London: why would anyone feel significant?