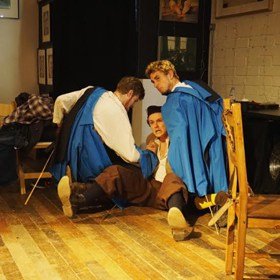 Breaking the forth wall can be a stage tactic to engage the audience, while other performances may decide to stick entirely to the text, yet Cyphers injects humour and an added sense of humanity and fun to their shows that is impacted by their mission to break theatrical barriers. Actors Will Holyhead, Ben Teare, Dylan Lincoln and writer, Marcus J.Bazley offer an enticing and comedic interpretation of the French novel, The Three Musketeers by Alexandre Dumas, published in the mid-1800s.

Adapted and conceived by Bazley, the show hones in on the way Dumas described the musketeers and not the usual ideals and characteristics we often assume of them – Disney-like figures with witty and courageous attributes with capes, moustaches and swords.

The first half is head to toe hilarious, as Dumas wrote his book, with jokes and lines filled with a few stage mistakes that causes no one to worry – Cyphers seem to have a handle of their environment. Even with a few, ‘what was I talking about again?‘, it never seems to destroy the flow of the comedy action. Watching Bazley and Teare, turn from manly musketeers to ladies of the court, with only a quick wrap of a skirt or pull-over dress to signify their character’s gender, is a marvelous sight. Every second counts for Lincoln and Holyhead too, as the foursome play over 30 characters in under two hours.

Jokes aside, the second half takes a serious turn. The political tones that shape Dumas’s novel is highlighted here, which intrigues Bazley. Why is the first half completely polarised from the second? Involving the same characters, the gestures and scheming are far more sinister, evil and cause many deaths. Letters, deception and bad deeds are done which end with an interesting scene of condemning and punishing a woman who had committed various crimes and murders. In many ways, Bazley’s adaptation is an insight as to how justice and condemning was practised in Dumas’s time.

Will Holyhead is versatile in his acting as we see him as a strapping young d’Artagnan and striking lover of the ladies. Dylan Lincoln is erudite as Athos and impressive as a slimy yet harmless landlord to d’Artagnan. Ben Teare can play the macho and simple musketeer, Porthos as well royalty with a smooth tongue, alongside cheeky Kitty and a handsome Constance Bonacieux. And Bazley too is energetic yet calm on stage. He shows us a fired up beast and evildoer Milady de Winter in the second half, but keeps things light-hearted as Aramis, the cool headed musketeer.

With a very minimal set by Caitlin Abbott, The Three Musketeers is currently showing at the Proud Archivist, near Haggerston, for a short time before touring. Catch them if you can!

THE THREE MUSKETEERS
This Spring, Cyphers will bring their unique style to one of the great works of French literature, The
Three Musketeers by Alexandre Dumas. Previews of the production will take place from the 21-24 April
at the London venue, The Proud Archivist, where Cyphers have recently been appointed Resident
Theatre Company.

ABOUT THE PRODUCTION
The Three Musketeers tells the story of d’Artagnan, a feisty young Gascon who sets out for Paris in 1625
with the hope of joining the King’s Musketeers. He quickly becomes embroiled in a political game
much bigger and much more dangerous than he could possibly have imagined. A thrilling adventure of
love and revenge unfolds in which d’Artagnan must save not only France but also the woman he loves.
Cyphers’ brand new adaptation sees four actors play nearly thirty roles, as the three musketeers (Athos,
Porthos and Aramis) relate d’Artagnan’s story in approximately two hours of fast-paced and exhilarating
action.
http://cyphers.org.uk/

The pairing of work by Bob Dylan and Leonard Cohen in a single recital is a logical move. Though the latter died five years ago, his and his old … END_OF_DOCUMENT_TOKEN_TO_BE_REPLACED

If the dialogue wasn’t quite so eclectic and engaging, I might have decided to attempt to have kept a tally of how many times a trestle table is … END_OF_DOCUMENT_TOKEN_TO_BE_REPLACED

Doctor Who: Time Fracture by Immersive Everywhere has plenty to exhilarate both avid and casual Doctor Who fans, delivering on its promise to let … END_OF_DOCUMENT_TOKEN_TO_BE_REPLACED

A brief review of a brief play. It is, as the Prime Minister (Lisa Day) observes, extremely unlikely that her ‘letter of last resort’ would ever … END_OF_DOCUMENT_TOKEN_TO_BE_REPLACED

It’s a production of Hamlet that starts at 7:30pm and manages to come down on the ‘right’ side of 10:30pm - the hardcore fans and followers of … END_OF_DOCUMENT_TOKEN_TO_BE_REPLACED